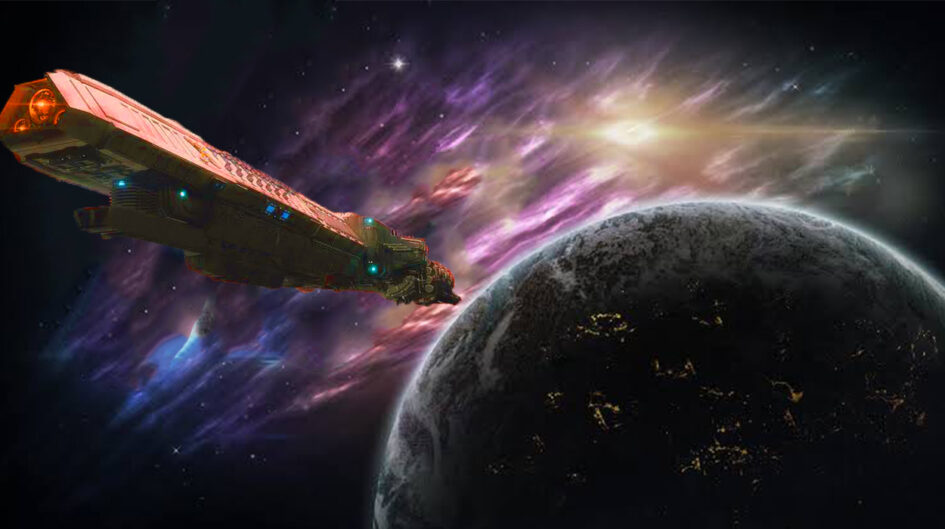 Over the years, the human race not only managed to save their home but also succeeded in colonizing eight different planets. Advancing technology and their never-ending desire to explore space have resulted in the journey of Novastella. It’s a spaceship on a hundred-year manned mission to an unknown galaxy to explore other inhabitable planets with 250 people on board.

It’s been only sixty-four years since Novastella set out on the journey, but the crew is already awake from cryosleep, a technology that allows a person to hibernate without ageing. And now, they have to deal with an unknown space object.

“So we don’t have any data on the object. What would have happened if we had crashed into that object while we were still sleeping? We will have to strategize immediately.” said Alanzo Caesan, the captain of the ship, pacing through the hallway to the bridge. ” And we can’t expect anything from the Earth station until Mclaren’s rule falls, we must not let the crew know about this, it will make them lose hope and affect their work,” said Christy, the second in command, a 22-year-old young prodigy, maintaining Alanzo’s pace.

“Judging from that look, you already have a plan, don’t you, kid?”.

“Will you both stop bickering and return to the bridge? It’s Jein and Hoop, the team who went to study the object closely. They are out of sight and aren’t responding to the comms.” said Kaven blocking their path.

” So they were your plan,” whispered Alanzo to Christy.

After some time, they announced that the space object they encountered might be a black hole, so they will have to run a manual override to change the trajectory, which will affect the communication with the earth station for a few days.

Back on the Earth, a few days ago, the US government had been taken down by a coup d’etat led by Mclaren, a half Russian. He had ordered the state’s space research centre to surrender all of their research data and also the control over Novastella ship.

Just before Mclaren’s men went in, the scientists had transferred the research data to the ship. They woke up Alanzo and Christy to brief the situation. In the end, Mclaren wasn’t able to gain control over the Novastella.

Back on the ship, the main crew was successful in tracing the coordinates of the planet, which was Novastella’s first stop. They informed the crew that they would be reaching the planet in 30 days and thanked the members who worked to upgrade the ship with advancing technology every five years. They also announced that Jein and Hoop returned alive. Only a few knew that Christy planned the incident with Jein and Hoop so that they could give a reason for not being able to contact the Earth station. And so they had to lie about the unknown object being a ‘black hole’.

Novastella was successful in reaching its destination. They managed to settle in their new home in three months.

“Still no word from the earth station! I think it’s time for our next destination” Christy said.

” We can wait until we get a word from them, it’s not like the Earth is going anywhere….wait, what is that sound?” Jein yelled, rushing out.

“It’s a Russian ship, I see the flag!” exclaimed Christy, staring at the spaceship through the telescope.

“It will take less than 15 minutes for it to land. Gather our people, it’s time, they need to know the truth about the situation at hand,” said Alanzo.

The crew reacted positively to the newfound information. Alanzo and the other 50 members attacked and confined all 45 members on the ship before they had any chance to counter-attack.

They investigated Rogers, captain of the Russian ship for hours, but he was not willing to open his mouth. Alanzo went into the investigation room and whispered something into Rogers ears which made him start talking. ” I understand, it’s such a disappointment to fail after everything we’ve been through to reach this place in only ten years. Mclaren was supposed to mislead your ship and make us the heroes we were meant to be. But, he failed to take control of your ship. Still, we hoped that you could never reach the planet with 60-year-old technology. But we failed to predict that you were upgrading the ship for every five years,” said Rogers with his head down.

A year before Novastella’s launch

” You all know that Novastella, the project developed by genius minds from all over the world, had a set back after losing the main device. This cost us billions. We have found proof that Dr Nicholas, the Russian scientist, was near the device before it was stolen. We have clear evidence to demand you, Dr Nicholas, to either return the device or pay for it. Leave this project along with your other Russian friends in any case.” said the director of project Novastella.

Dr Nicholas and other Russian scientists had to resign from the project, and their government paid for the device. But, Dr Nicholas was framed, and he had no way to prove it. The Russians worked hard for so many years under Nicholas’s supervision to develop Supernovae. This ship could reach another galaxy in just 10 years.

Soon after, the U.S government had been reinstated after successful attempts by the Army. The comms to Novastella were also re-established. When the Earth station contacted Novastella, Alanzo gave them all the information but however, didn’t report the Russian ship.

The next day, Alanzo broadcasted a message to the Earth which mentioned their success and also Supernovae’s accomplishment. Christy asked Alanzo why he let the Russians be the heroes. He then narrated the incident which happened a year before Novastella’s launch. He also mentioned that Dr Nicholas was a close friend of his. Rogers and his crew thanked Alanzo and promised to work with him in their next mission.

Inspired by the book Goldilocks by Laura Lam.

The scene opens in a jury room, where a decision is to be taken on the death sentence of a man accused of murder. After voting, each juror explains why they feel the accused is guilty or not guilty. One... END_OF_DOCUMENT_TOKEN_TO_BE_REPLACED

“Propaganda” in present-day English, refers to information or media (especially of biased or misleading nature) that is used to manipulate the audience to further an agenda. If you hear the word propaganda, it immediately alerts you to look out for... END_OF_DOCUMENT_TOKEN_TO_BE_REPLACED

Did your 8-year-old self ever wish for that awesome Pixar movie that you watched, and you watched, then you watched again, to be real? Because I did!  I had a dream. I wished I was a car so that I... END_OF_DOCUMENT_TOKEN_TO_BE_REPLACED