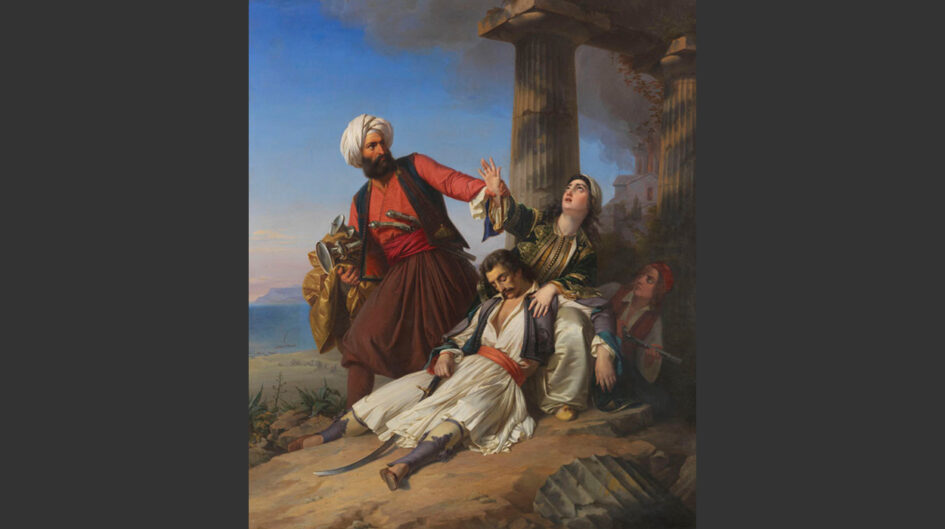 The left side of my jaw was throbbing with pain and I could feel the metallic taste of blood in my mouth. I was standing on the dais with bonded hands and dishevelled clothes stained with blood from my injured shoulder. I could see men around me celebrating and looking at me like an object they couldn’t wait to destroy.

Later, I was led towards two men, a dark-haired man and another with golden hair with clothes covered in blood. I trembled in fear and stepped away as I saw the latter abruptly pull a knife out. The dark-haired man then tried to speak to me in a language that I did not understand but looked like he tried to assure that they wouldn’t hurt me and freed my binds. The kind man cleaned and bandaged my wounds and led me to a tent for me to spend the night.

The next morning, I peeked outside the tent to find the man who saved me. I saw him standing on the shore talking to the golden-haired man. He turned around and noticed me staring at him and came over to try talking to me and calm me down.

“Patroclus,” he said, pointing at himself.

“Pa-tro-clus,” I repeated his name slowly. He smiled.

When he turned around to walk away I said my name. He stopped and faced me.

“Briseis?” He repeated with his corners of mouth turning up. I nodded.

My father had taught me a few Greek words, in case I was captured by the Greek army invading Troy. I could say mercy, yes, please and what do you want.

The Greeks had waged a war on Troy because the second prince of Troy, Paris, had kidnapped the Queen of Sparta, Helen, who was rumoured to be the most beautiful woman in the world and was also the daughter of the king of gods, Zeus. Helen’s husband Menelaus, along with his brother Agamemnon bought troops from all over Greece to invade and take revenge on Troy. The camp I was residing in belonged to Achillies, the strongest man on Earth. He was the son of a water goddess and the king of Phthia. He had set up a camp with his aide Patroclus and his troops on the coastline of Troy.

During the day, the camp would be mostly empty, as the troops led by Achilles raided the nearby villages for supplies. Patroclus and I would spend time on the beach, trying to communicate with each other. He would draw on the sand to explain the words and I would use exaggerated hand gestures which seemed to amuse him. This soon became my favourite time of the day.

As the raids continued, more women began arriving into the camp. I was always the first one to meet and comfort them.

Patroclus began to teach them Greek to make them more comfortable in the camp.

Years in the camp passed peacefully. My feelings towards Patroclus grew into love. But he could never love me as he had a lover who he loved dearly.

The camp was then hit with a mysterious yet deadly plague. It affected livestock and men and they dropped dead daily like flies. Everyone speculated that it was the punishment of the gods. I was making medicine when Patroclus rushed towards me with a pale face. He informed me that Agamemnon’s men were coming to capture me as he had to give up his slave because of the curse. Men came and tied me up and dragged me out. Achilles saw me being dragged away with cold eyes, whereas Patroclus’ were filled with worry. I was thrown into Agamemnon’s tent. I was shaking with terror when Agamemnon came into the tent with Patroclus. He told Agamemnon that killing me was a trap laid by Achilles because I rightfully belonged to Achilles and he would use me as a chance to kill Agamemnon. He betrayed Achilles to save me.

“Treat her well,” Patroclus warned before leaving. Patroclus sneaked into the tent that night. With a broken voice I pleaded “Promise me that whatever happens, you will not leave Troy without me. I would rather live as your sister than remain here.” He smiled and agreed. While he was leaving, I wished him luck and bid him farewell. If I had known that was the last time I would talk to him, I would’ve made him stay longer.

A few days later, I was being escorted back to the camp by Agamemnon’s soldiers. I was excited to come back to Patroclus’ side. I saw Achilles kneel on the ground surrounded by his men clutching a lifeless body. My heart filled with dread as I rushed towards him. Patroclus was lying on the ground, his body covered with dirt and blood.

The always confident Achilles asked, “Who did this?”

Achilles stayed with me even after his men left and began wailing.

He yelled curses on the first prince of Troy, Hector, and pledged to avenge his death.

Filled with rage I yelled, “Do you think you are the only one who loved him? You were supposed to keep him safe. He was worth ten of you.” I wished Achilles was dead instead.

In the following days, Achilles killed Hector and his troops successfully entered Troy by misleading the Trojans to take a huge wooden horse filled with Greeks into the city. Achilles died during the fight. Achilles’ son came to the camp to replace his father as the commander.

At night it is eerily quiet as I walk with tears rolling down my eyes towards the beach where he and I spent time together. With blurry eyes, I look towards the ocean and see a bright light in the middle of the ocean beckoning me to join. I walk towards it, smiling.

“Propaganda” in present-day English, refers to information or media (especially of biased or misleading nature) that is used to manipulate the audience to further an agenda. If you hear the word propaganda, it immediately alerts you to look out for... END_OF_DOCUMENT_TOKEN_TO_BE_REPLACED

Many of us might look back at the time we spent in school with nostalgia and fond memories. But most will also agree that it wasn't the happiest of places with long and monitored study hours, heavy bags full of... END_OF_DOCUMENT_TOKEN_TO_BE_REPLACED

Two things have always fascinated me as a child- words and crosswords. Which word should I say? How do I say it? Can it, in its barely ten letters, hardly three syllables, carry the whole meaning of what I want... END_OF_DOCUMENT_TOKEN_TO_BE_REPLACED

Did your 8-year-old self ever wish for that awesome Pixar movie that you watched, and you watched, then you watched again, to be real? Because I did!  I had a dream. I wished I was a car so that I... END_OF_DOCUMENT_TOKEN_TO_BE_REPLACED