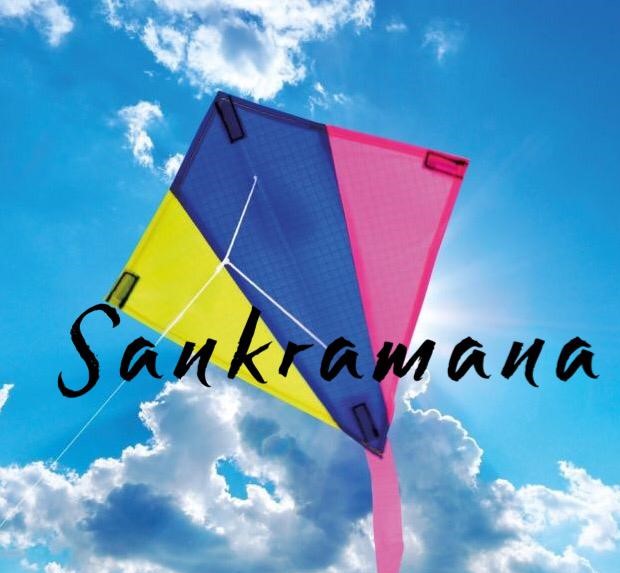 Sankranti is a harvest festival widely celebrated in India. While most of us may be aware of why the festival is celebrated, here are some lesser known but great facts about the festival.

Sankranti is the only Indian Hindu festival that follows the solar calendar, whereas many other Indian festivals are celebrated as per the lunar calendar and because of this, it falls on the same date every year i.e., January 14th and 15th. Sankranti refers to the name “ Sankramana” which means transit, and here it ’s the transit of sun in its celestial path. This path of the sun is divided into twelve parts and each part is known as “Rashi” (Zodiac sign). So, whenever the sun enters the particular Rashi it is called Sankranti, but we celebrate the Makara (Capricorn) Sankranti where the sun enters the zodiac sign “Capricorn”. 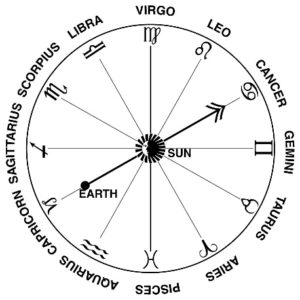 Ages ago,  Makara Sankranti  was celebrated on the winter solstice which takes place on the 21st of December. On this day, the sun is directly overhead on the Tropic of Capricorn (Makara Vruttam) and it is also called as Uttarayanam. Since the Hindu calendar follows Lunisolar, every date indicates the phase of the moon and solar year time due to which the calendar slides at the rate of 1 day every 72 years away from the Gregorian Calendar. This is how Makara Sankranti is drifting away from the winter solstice. In another thousand years, Makara Sankranti could be celebrated in the month of June!

Sankranti is synonymous with making the sky look colorful with kites. Kite flying in olden days was generally done in the early hours when the sun rays wouldn’t be very bright. The reason being, the human body would be exposed to the sun for some time which was considered beneficial for skin and body since Hindus considered winter to be the time for infections and sickness.

Sankranti is celebrated in different ways in various regions of the country. It is known to be a Harvest festival because this is the time when crops are harvested. In the states of Andhra Pradesh and Telangana, there is a celebration for four days including Bhogi, Makara Sankranti, Kanuma and Makkanuma. Bhogi is the day when people discard old belongings by lighting a bonfire with logs of wood, fuel, and furniture that’s not in use. Makara Sankranti is the main day of celebrations where people decorate their houses and make beautiful rangolis and then place the  ‘gobbemma’ on it(small pile of cowdung).

The day of Kanuma is close to the hearts of farmers as it is a festival of their cattle. The fourth day, Makkanuma is the day where farmers pray to the elements like soil, fire and to the Goddess of their village. Another interesting thing that happens this day is the visit of Haridasu and Gangireddu in the early mornings. Gangireddu is a cow dressed colorfully and Haridasu means servant of Hari (Lord Vishnu) who sings the songs of Lord Vishnu and goes to every house to take biksha. 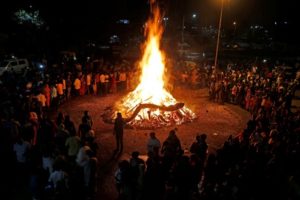 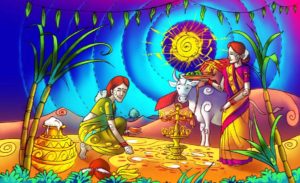 In Goa and Maharastra, Sankranti is celebrated for three days, Bhogi, Sankranti, and Kinkrant in the honor of Goddess Sankranti who killed the demon Sankrasur Rakshasa. The men and boys fly kites and the married women celebrate Haldi Kumkum. In the state of  Odisha, they believe that Lord Surya got over his anger with son Shani on this day and visited him. They celebrate by offering fruits to the Lord. It is celebrated as Maghi in Punjab by bathing in a river in the early hours and lighting lamps with sesame oil to mark prosperity. People perform bhangra and take delicious food. The next night before of Maghi is celebrated as Lohri celebrated with a bonfire. 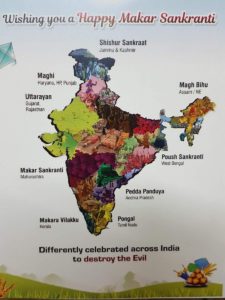 This festival has great importance not only in India but in many other countries as well. In Bangladesh, it is an annual celebration of winter named Shakrain, celebrated with kite flying. In Nepal, it is called Maghe Sankranti which is the first of Magh in their Hindu Solar Nepali Calendar. The Sindhis in Pakistan celebrate this festival, where parents send ‘ladoos’ and ‘chikki’, which are sweets made of sesame seeds to their married daughters. Thus, in their own beautiful ways, everyone welcomes this festival with pleasure and marks as one of the most significant festivals for all the Hindus around the globe.

The lockdown, for most of you, was the most boring time of my life. Six months of staying at home didn't do me any good apart from the fact that it brought me and my dad closer by giving us... END_OF_DOCUMENT_TOKEN_TO_BE_REPLACED

Faith has always been considered as one of the most inherently pure and pious things, across any and every religion and every school of a belief system based on the concept of God. That is probably because every single one... END_OF_DOCUMENT_TOKEN_TO_BE_REPLACED

Many of us might look back at the time we spent in school with nostalgia and fond memories. But most will also agree that it wasn't the happiest of places with long and monitored study hours, heavy bags full of... END_OF_DOCUMENT_TOKEN_TO_BE_REPLACED

Ayrton Senna. A man whose legacy lives on to this day. Most modern-day drivers look up to him. He has won 41 Grand Prix in 162 races, has been on the podium 80 times, and has won the world drivers championship... END_OF_DOCUMENT_TOKEN_TO_BE_REPLACED