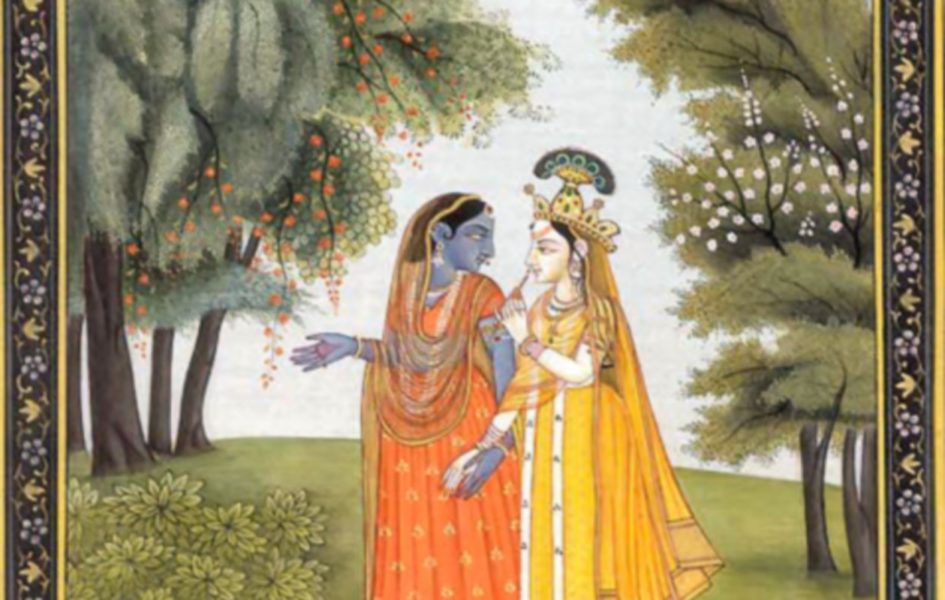 I live in a house bounded by four walls. Inside of whom, exist my ideas and expressions, and outside them, there are laws and rules different from what I follow inside. Precisely, within these walls lie culture: Sanskruti (my establishment) and beyond these walls lie nature: Prakriti (not my establishment). If I wish to live in peace, I need to respect the laws of nature and uphold the laws of culture. When seen from a larger perspective, where ‘societies’ become my home, the establishment of cultural norms and respect for natural laws become a necessity because, when the establishment of culture is unchecked, nature suffers and when nature is given the supreme niche, cultures collapse. Prakriti and sanskruti require a ‘man’ to bring balance between them. Now, should that ‘man’ be robust and muscular or more feminine like Prakriti? Should that ‘man’ be dominant over nature or submissive under her? Shall Prakriti’s desires be curbed or be fulfilled by that ‘man’?

Tantra traditions mention that after the fusion of the male seed with the female seed, depending on the dominance of the either, the embryo’s gender is decided. Until then, it develops the same features of male and female. Two eyes, two ears, one nose and even two papillae. But, Vishnu (Narayan) is said to be a complete man, without any papillae. In whose presence, no other male can exist; peafowls are transformed to peahens and men to women. 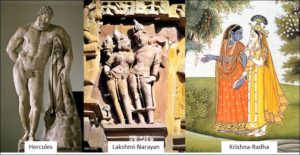 Even though, the concept of stone sculptures comes from the Greek marble statues, where men are portrayed as ripped and bulky; Vishnu has curved hips, a slim waist, plum lips, and big round eyes. As Krishna, he wishes to experience how it feels to be a woman, so clads himself in his beloved Radha’s sarees while she wears his robes. He takes the form of Mohini to copulate with Iravan, a man destined to be sacrificed to the Goddess, during the war of Mahabharata but did not wish to die a virgin and desired for a wife who shall weep for him when he’s no more. Yet, Vishnu is the ‘perfect’ male. If not power and might then who are the ‘men’ (Nara) in Narayan’s (Vishnu) eyes?

In culture ‘dominance’ has often been identified with the male, both in terms of ruling and mating. A dominant male is unanimously equated with a strong male. Mahabharata mentions the story of how Balarama, being tired of the long walk to the river Yamuna for his bathe asks her to change her course and to flow near his hut. When she refuses, he strikes his plough at her hair and drags her towards his home. This domination of a man over nature caused cultivation. Construction of a tributary for the river.

But what if ‘Prakriti’ becomes violent and frenzy? Dominating her, in this case, would be equivalent to putting out a fire with a fire. During a fight between the goddesses and demons, Kali had attacked Raktabeeja, a demon who had the boon that from each drop of his blood there shall rise his clone. To prevent this, she gulped down every drop of his blood before it could reach the ground while other goddesses beat him to death, but, this made her bloodthirsty. She started her dance of destruction. To stop her from massacring the Earth, Shiva had laid on the ground thereby allowing her foot to be stomped on his chest. Seeing her beloved husband under her feet, she calmed down. 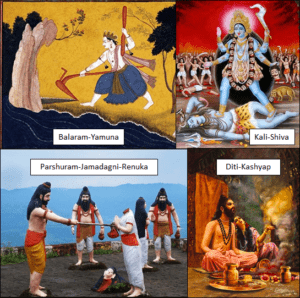 But, Prakriti desires. Puranas mention Renuka who, with her power of chastity, could carry water even in unbaked earthen pots. One day, while collecting water, she infatuated over a handsome Gandharva (celestial musician) who was bathing in the river. As a result, the pot in her hand was reduced to clay, blemishing her clothes. When her husband, Rishi Jamadagni saw this, he ordered his five sons to behead their mother. All except one, Rama (later named as Parshurama) obeyed his father and beheaded Renuka. Pleased with him, Jamadagni granted any boon Rama desired of, and he asked for the return of his mother’s life. Jamadagni had to restore Renuka back to life

Puranas also mention the desire of Diti, one of the thirteen wives of Rishi Kashyap, along with Aditi. Diti had craved for children and so approached her husband. Kashyap asked her to wait since the time was inauspicious but Diti was adamant and snatched Kashyap by his clothes. As a result, the sons she bore would’ve been wicked and evil. But, Vishnu ensured that the sons were the reincarnations of Jaya-Vijaya, the doorkeepers of Vishnu’s abode who were cursed to be born as evil and be ultimately killed by Vishnu, thereby liberating them of their curse.

Prakriti’s desires often challenge cultural norms. But to destroy Prakriti in order to uphold sanskruti makes no sense, as in the case of Renuka. So, Parshuram (Narayan) requested for her restoration. To disapprove of her desires would be her insult, no matter what consequences, as in the case of Diti. So, Vishnu (Narayan) ensures that along with the satisfaction of Prakriti, Sanskruti continues to be established.

For Narayan, Prakriti and sanskruti, nature and culture, are two important aspects of life. From a personal point of view, if my destiny (Prakriti) turns against me, I (Purush) have no choice but to accept it, becoming Shiva to Kali. But, if fate (Prakriti) deviates me from my ambition, I need to mold it, like Balaram to the Yamuna. If the society’s immoral norms have to be destroyed (as Jamadagni to Renuka), I, as Parshuram, shall be able to reinvoke its cultural ethics. And, if the situation forces me to commit actions against my will (as Kashyap to Diti), I shall be able to make most of its consequences (as Vishnu to Jaya-Vijaya).

Thus, the man who understands the necessity for protection of Prakriti and establishment of Sanskruti ultimately becomes the Narayan’s Nara.

When the year began with rampant bush fires in Australia, an almost-triggered-the-world-war-3 magnitude conflict between the USA and Iran, and the tragic deaths of Kobe and Gigi Bryant, people thought, just maybe, we've had our share of trials and tribulations... END_OF_DOCUMENT_TOKEN_TO_BE_REPLACED

The pandemic season is upon us. At the time of writing this, we're all isolated from each other to protect ourselves and others more vulnerable than us. A by-product of this rather long isolation is just heaps of spare time.... END_OF_DOCUMENT_TOKEN_TO_BE_REPLACED

2020 has been a disaster so far with the deadly virus, the lockdown making us stay in our homes, juggling between our broken sleep cycles, helping with house chores, and trying out new recipes. We are watching a huge amount... END_OF_DOCUMENT_TOKEN_TO_BE_REPLACED

“Global shares take a hit - Big shift in stock markets, where shares in companies are bought and sold, can affect the value of pensions or individual savings accounts (ISAs).” -- BBC News   “Consumer confidence collapses in May, the... END_OF_DOCUMENT_TOKEN_TO_BE_REPLACED

[Warning] The following content may trigger anxiety. Reader discretion is advised.   The sun rose again. It was yet another day of the tiring and exhausting quarantine. Luv, still in his bed was reluctant to get up. His phone vibrated... END_OF_DOCUMENT_TOKEN_TO_BE_REPLACED