MSN- The Greatest Trio in History 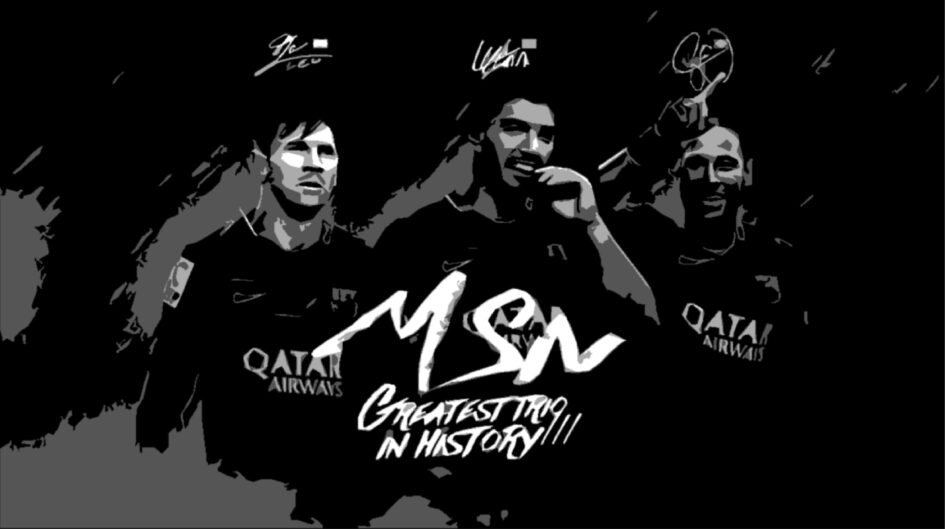 I remember the night I stayed up till 3 AM to watch the 2nd leg of Barcelona Vs PSG knowing fully well that Barça had conceded four goals and couldn’t score a single goal in the first leg of the UEFA Champions League round of 16. This meant Barcelona had to score at least five goals without conceding a single goal in the 2nd leg to avoid an early knockout from the competition. So basically, they needed nothing short of a miracle. Despite the odds, with all my faith in the team and 0-4 on the scoreboard, the match started. And boy would I’ve regretted not staying up for this, as FC Barcelona had done the unthinkable. They managed to equalise the score to 5-5.

With just 7 minutes remaining, a single goal from either side would confirm their place in the quarter-finals. And then suddenly, Neymar crosses the ball into the penalty box for Sergi Roberto who lunges forward and buries the 6th goal past the goalkeeper at the 95th minute of added time. With just 2 minutes of game time remaining, the stadium erupts in cheers and joy as FC Barcelona made history with the biggest comeback in Champions League’s history. As soon as this happened, I was awestruck. It was as if all my sleep had turned into excitement. And the excitement was well on even after the final whistle was blown. It was surreal to have witnessed a never-before-seen comeback from a score of being 0-4 down to make it 6-5 on aggregate in the dying minutes of the game. 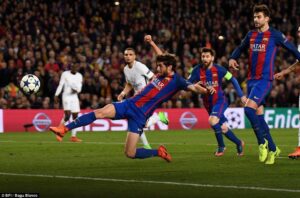 Although this was a team effort, the chief architects behind this historic feat were Barça’s fearsome front three—Messi, Neymar and Suárez, dubbed ‘MSN’. Despite Barça’s calamitous defending, this trio proved how ‘offence can be the best defence’ with their sheer attacking brilliance and magic. And such spectacles are customary for a trio like MSN. It was almost moving to watch them play football with the flair that they did. There’s no doubt that this trio was something special, but to earn the “G.O.A.T” tag, you have to be beyond special. Hence, we’ll have to go back to how it all started to truly appreciate why MSN was rightfully the ‘greatest trio of all time’.

Dawn Of A New Era:

When Suárez moved to Barcelona in 2014, Messi and Neymar were already there. They were successful, but they had an uneasy relationship with Alexis Sánchez. The replacement of Sánchez with Suárez changed everything for Barça. This newly formed trio had a stuttering start to the season thanks to Suárez’s four-month ban from all ‘football-related activities’ for biting the Italian player Giorgio Chiellini at the 2014 world cup. Yes, you heard that right. He got banned for biting, not the best achievement out there.

But fortunately for Suárez, this will not be the only thing he will be remembered for. This punishment mentally prepared him to channel his inner aggression towards scoring goals instead of inflicting physical damage. Finally, after the ban lifted Suarez went from biting like a Dracula to ripping through opposition defences like the shark from Jaws. He stacked up a total of 25 goals and 20 assists in his debut season. Combine this with the dribbling geniuses of Messi and Neymar, Barça became unstoppable.

Even better, the three South American rivals quickly formed a strong friendship on and off the field. This bond between them impacted their game a lot. With this chemistry, the attacking trio was ferocious in front of the goalpost. The stats speak for themselves as MSN scored a whopping 364 goals during the three seasons they were together. The most goals scored in a season by any attacking trio in Spanish football history. But, goals aren’t the only metric of greatness. Trophies are.

Silverware wasn’t much of a problem for Barcelona with the best trio on their side. They conquered everything there is in Spain. They won the Spanish league (La Liga) twice and the Spanish Cup (Copa del Rey) thrice in three years. But the greatest achievement for a club is winning the prestigious Treble. A treble is when a club wins three trophies in a single season. Barcelona had to win the league, the Spanish Cup and the toughest of them all, the Champions League.

Barcelona had already won a treble in 2009. But on the 6th of June in 2015, after beating Juventus in the Champions League final and being crowned “The Champions of Europe”, Barcelona became the first team to win a treble twice and till date is the only Spanish team to do so. With a total of 7 trophies in three seasons, Barça’s MSN did more than just making its presence known at the highest stage. 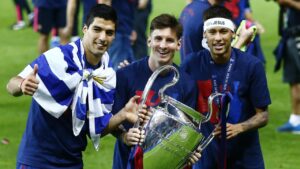 The End of The Golden Era:

As all good things come to an end, so did MSN on 3rd August 2017 when Neymar announced his decision of leaving Barcelona to join Paris Saint Germaine on a record transfer fee of €222 million. The same club he was instrumental against on the night of La Remontada (‘The Comeback’). After Neymar’s departure to PSG, Barcelona was never the same again. Messi and Suarez were the two pillars holding Barca together. Despite their best efforts, it was evident that Barcelona missed Neymar.

Taking a turn for the worse, Barca had to let Luis Suarez go due to financial troubles in 2020, thanks to Bartameo’s disastrous management of the club. With rumours of Messi wanting to leave Barcelona to reunite with his old friend Neymar at PSG, who knows what the future holds. But, it’s certain that Barcelona will have to look past the golden era of MSN and look to rebuild the squad like they have done many times before. 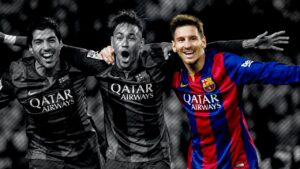 With the trio all split up, it’s heartwarming to reminisce what the MSN once was. Barcelona gave us the best team this generation had seen with a star-studded lineup and a surreal attacking trio. A trio which was more deadly and versatile than any other in football history, be it the one formed by Benzema, Bale and Cristiano Ronaldo (‘BBC’) or the trio formed by Ronaldo, Ronaldinho and Rivaldo (‘RRR’). It was a gift to watch them shatter defences and humiliate goalkeepers. Three sensational players who showed us the strength of camaraderie and perseverance to achieve the unthinkable. The tales of their glory will be told well into the future as this lot will go down as ‘The Greatest Trio in History’.

Did your 8-year-old self ever wish for that awesome Pixar movie that you watched, and you watched, then you watched again, to be real? Because I did!  I had a dream. I wished I was a car so that I... END_OF_DOCUMENT_TOKEN_TO_BE_REPLACED

Ayrton Senna. A man whose legacy lives on to this day. Most modern-day drivers look up to him. He has won 41 Grand Prix in 162 races, has been on the podium 80 times, and has won the world drivers championship... END_OF_DOCUMENT_TOKEN_TO_BE_REPLACED

The scene opens in a jury room, where a decision is to be taken on the death sentence of a man accused of murder. After voting, each juror explains why they feel the accused is guilty or not guilty. One... END_OF_DOCUMENT_TOKEN_TO_BE_REPLACED

It feels like just a week ago when the internet was bombarded with memes of Will Smith slapping Chris Rock at the 2022 Oscars. Ah, what a moment. The Cannes Film Festival too ended just recently, leaving us waiting for... END_OF_DOCUMENT_TOKEN_TO_BE_REPLACED