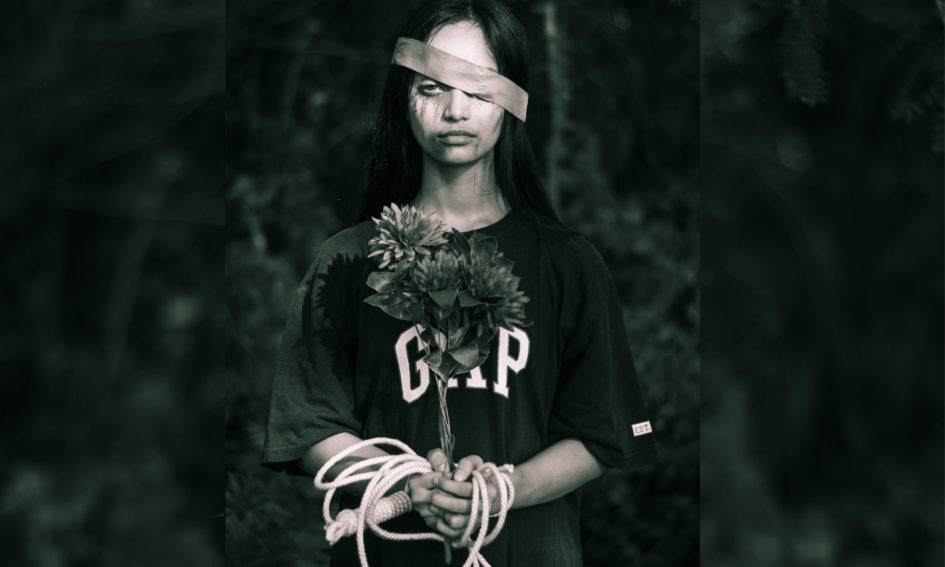 Life took a horrifying turn for Sushma after that fateful day. The day that changed her life. There she sat under the windowpane, dressed in rags, her hands bruised. Her eyes were swollen and tears ran down her cheeks. How she longed to get back home, to her family, her normal life.

The guard yelled at her from afar, “You there! Get back to your room”. Taking support of the window she stood up a little shakily and walked back slowly towards her room through the dimly lit corridor. She looked at herself in the small mirror in her room and started sobbing. She lay on the hard floor, with her stomach growling, gazing at the pale ceiling. Everything had changed since she was kidnapped, and brought here to be a slave and for the sexual pleasures of a rich old man. She wasn’t the only one who fell prey to this agonizing life here, there were more girls of about the same age as her at the receiving end of the molestation and frequent assaults.

What is human trafficking? How did it affect the nation in the past decade?

Human trafficking is trading people either within a country or trans-nationally. Kids, teens, and women are the ones who are most often the victims. Human trafficking is one of the fastest-growing crimes of the world wherein the people trafficked are held for bonded labour, child labour, structured illegal organ donations, sexual slavery or commercial sex exploitation. In an era where we have developed and crossed horizons in terms of technology, space systems, entertainment and in many other sectors, criminal acts like trafficking are a disgrace to the nation’s security and safety concerns. India has brought in laws, regarding this, into effect but still is a few steps behind in actually putting its best foot forward in punishing those responsible. India initially incorporated most of the foreign laws on human trafficking, with the first being ‘The forced labour convention of the International Labour Organization, 1930’ from which the Indian law has ratified most of its definitions. When we are fast achieving higher targets in globalization, we have also come a long way in enforcing safety measures over the years.

A thought that comes to mind when we speak of the victims of the ghastly slavery and labour in unknown places, away from family and devoid of mental peace, what exactly do they go through in the long run? In the case of bonded or child labour, kids and adults are forced to stay under probably physically tiring and painful conditions that affect their physiological and psychological health. The labourers are confined to these places without any surety of a return date. Though a lot might have changed in the techniques of luring commoners into believing the traffickers, if there is one way that still is the most common of them all, it is the way the traffickers encash in on the vulnerabilities of the victims, before assuring them of a much better life ahead. Victims go through a lot of agony, stress, and trauma during these times, and even if they are rescued from that hell, chances are low that they come out of it completely even after treatment.
But the situations of victims of sexual slavery and commercial sex markets are even more depressing. The method of coming into contact with young girls and teens has changed a lot in the past decade. The kidnapping was pretty much the only way of trafficking girls, apart from times where people who were illiterates or were financially weak would sell their daughters. The scenario now though, is a little more convenient, courtesy, social media. Traffickers get to know the details of girls very easily, befriend them and gain their trust, making the girls easy targets. As if, social media wasn’t enough to carry out this crime, there are also several cases of forced marriages to foreigners or unfamiliar men who might turn out to be middlemen in the trade who might sell them after marriage. The victims also face a societal pressure of feeling left out or different from the others which are due to the discrimination they go through and the hatred they receive from the very people around them. And this is nothing less than the hell they have been rescued from. In such environments there prevails a sense of insecurity, dependency as well as loneliness, these in return lead to suicidal tendencies.

If there is one thing that has changed about trafficking, rescue operations are being carried out more effectively. In the early years of the decade (2008-2018), it was a rare sight to bring back people from other countries or from far off areas, but due to the evolution and the vast expansion of technology and logistical operations, it has become easy to conduct raids. Search operations and effective efforts to try to bring back at least some of the missing ones have been largely successful. In contrast to just mentioning laws and punishments against trafficking as well as traffickers, the government has formulated a set of laws that are violated in such crimes:

Rehabilitation centers for the rescued and the sufferers to come back into a normal life have come into existence. These homes make trafficking victims independent and stronger in all aspects. Such changes help them in developing an optimistic view of the future.
Though there still might be many more people like Sushma still waiting to get back home, to their normal lives, to a life of peace, free from the agony and pain. The joy of coming back to loved ones is what all their hearts yearn for…

Information about the Acts:

Law against Human Trafficking in India

The Big Bang Theory is the leading explanation of how the universe began. Did you know, some scientists believe that when this happened, an alternate universe was created? They believe it is an anti universe, a mirror image of our... END_OF_DOCUMENT_TOKEN_TO_BE_REPLACED

“RYAN! RYAN!” “Yeahh..” came a faint response from upstairs. “If you aren’t down here in the next five minutes, you might as well change into your pyjamas and tuck yourself into bed.” yelled Evelyn from the living room, throwing books... END_OF_DOCUMENT_TOKEN_TO_BE_REPLACED

Dawn was winding when Aahil was trying hard to get some sleep. He used his hands to cover his ears and sometimes even buried his head under a pillow. He couldn’t listen to the onslaught of verbal abuse going high... END_OF_DOCUMENT_TOKEN_TO_BE_REPLACED

David wakes up to find everything unusual. The glittering sun rays that spread various hues of shine are not silver or gold, the grass is not green, the sky is not blue. Everything in sight is anomalistic to him. In... END_OF_DOCUMENT_TOKEN_TO_BE_REPLACED

Lip, dip, paint. Grace Fryer was 18 years old when she first heard these words – eager, ambitious and ready to take on the world. She was employed as a dial painter with Radium Luminous Materials Corporation. Six years later,... END_OF_DOCUMENT_TOKEN_TO_BE_REPLACED