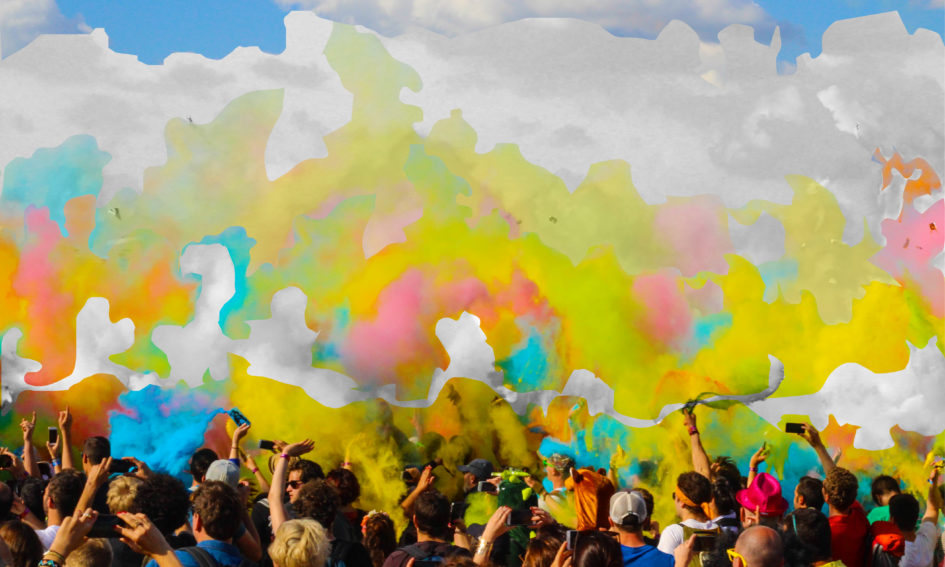 “Maiyya! Radha called me black, again!” The dark-toned Krishna cried while running back to his queen mother Yashoda. “Lalla”, Yoshada smiled as she took some turmeric powder in her hand and applied it across Krishna’s arm. “See, now you are yellow!” Krishna revolted in laughter as all the mothers sitting around their queen also joyously applied the yellow turmeric to Krishna.

With his complexion now matching his tightly tied Dhoti, eight-year-old Krishna rushed towards Radha. “Radhe!”, he shouted while smearing crushed violet jamuns across her crimson red cheeks. “Now who’s black!?” Krishna giggled and ran as Radha sprinted behind him while shouting “Krishna! Krishna!”

The people of Vrindavan couldn’t stop themselves from joining this celebration after seeing these two young tulips running behind each other while smearing red kumkum, orange sindoor, violet jamuns, yellow turmeric and many more hues of Nature. Soon the entire Vrindavan was draped in a rainbow.

Every Holi, when my grandmother ties the sweet sugar candy necklace around my neck after I’ve spent some two-three hours trying to wash away the colours from places unimaginable, this folklore flashes in front of my eyes. Pink me, who had failed at keeping his vow to never use Pucca Rang (permanent colour) while playing Holi, continued to suckle the sweet candy, like a toddler.

Holi is one of the most cherished festivals in India. When a country has cities nicknamed after colours, it isn’t surprising that it’s festivals are as colourful as they can get. But did you know that long before, Holi was never a festival of colours but a festival of ashes?

Holika-Dahan, the bonfire celebrated on the night before the colourful day speaks volumes about it. The legend of Holika-Dahan mentions an evil Daitya (ungodly person) King Hiranyakashipu, his sister Holika and son Prahalad. Hiranyakashipu hated the gods and was hell-bent on murdering all those who worshipped them. But fate had resulted in his young son becoming a staunch worshipper of Lord Vishnu. Blinded by the hatred, Hiranyakashipu didn’t think twice before ordering his son’s execution. Holika, the demoness who possessed a mystical blanket which could prevent the fire from touching her, was asked to sit with young Prahlad on a pyre. When the flames engulfed the aunt and nephew, to everyone’s surprise, the blanket flew off Holika’s body and fell on Prahlad. While Prahlad stepped out unscathed, Holika was reduced to ashes.

This incident of good’s triumph over evil is enacted every year in different corners of the country. The burning Holika bonfire is worshipped annually with flowers, coconuts, food and sugar candies being thrown into the flames. For ages, when the flames cooled down the next day, people smeared the residual ash on each other. Dhool-vad or Dhoolivandan, the worship of this ‘dhool’ (ash) hence was celebrated. But why ash?

The significance of ash is painted all across the legends of India. Ash is the ultimate state of any object. Because everything, when burnt, leaves nothing but ash behind. That which cannot ever be reduced to anything else. One fine day, Heavens, Earth, and Hell all are believed to be reduced to this ash. Our proud possessions, our hoards of wealth and we are going to meet the same fate. Ash hence teaches us to be humble. And with utmost humility, as we apply ash to each other, we are reminded that we are equal.

While Dhool-vad is celebrated on the second day of Holika-Dahan, Rang Panchami (fifth day of colour), is celebrated on the fifth day from the full moon night. Many link this day with the story of Krishna and Radha and their playful encounters. As years passed, possibly, the dhool (ash) was replaced with the beautiful colours we see today.

Ultimately, even when Krishna had first played the Colourful Holi long back in Vrindavan, the takeaway was simple. It doesn’t matter whether we are fair or dark, tall or short, hunched or straight, ultimately, we all are blobs of pink, drenched in water, flocking around shouting “Bura na mano, Holi hai!”, no offence ’cause Holi!

Police sirens, an opened door, a step out of the flat that had been an abode and a prison for 6-years-9 months-23 days—freedom at last?   Julian Assange was under no such false impression as the British police dragged him... END_OF_DOCUMENT_TOKEN_TO_BE_REPLACED

Growing up watching Sci-fi movies, I always imagined myself living in a fully automated world with all these cool tech devices- flying sneakers, teleportation units, and whatnot. Something as dreamy as the “first cognitive city” proposed to be built in... END_OF_DOCUMENT_TOKEN_TO_BE_REPLACED

Comfort space is personal to every individual. It allows you to be yourself and cherish the moments as they are with no judgment whatsoever. As for me, movies and music do the job. Speaking about movies, I have been exposed... END_OF_DOCUMENT_TOKEN_TO_BE_REPLACED

[Trigger Warning] The following reading contains events of death. **This is entirely a work of fiction and no distress was intended for any family/person affected by a natural disaster. “Please Ma!” Arya pleaded. “I made it to my final semester.... END_OF_DOCUMENT_TOKEN_TO_BE_REPLACED

[Trigger Warning] The following reading contains potentially distressing information about self-harm. The reader is advised to use their discretion to continue reading.   Darkness cocooned her room, her heart twisted, churned, her fingers closed around her throat, nails digging into... END_OF_DOCUMENT_TOKEN_TO_BE_REPLACED