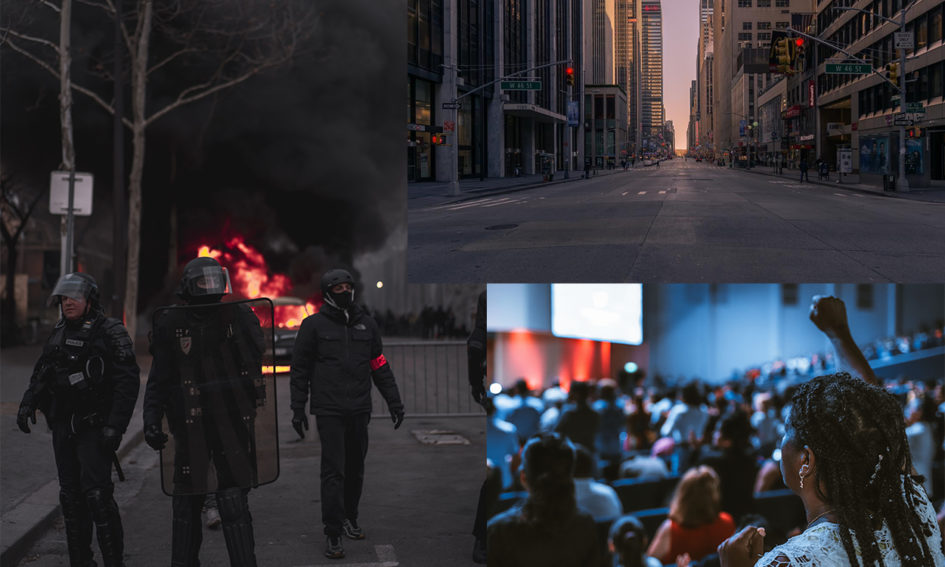 I can feel my pulse rising. At present, I cannot recall any of my memories. I only know that I should kill to defend myself, or else I’ll die. I feel someone is controlling my mind. All I can see is soldiers slaughtering innocent people. But what did we do to deserve this? Is this the end for us? I stand amidst this chaos, hoping to find my answers. I suddenly feel dizzy and the next thing I know is that I am on my bed. That is when I realize that it was just a dream.

Should I be relieved to know that it was only a dream, or should I worry that I’ve been having these nightmares for a while now? My parents always used to worry about the dreams I had as a child. Because there were a few incidents when my dreams of future events occurred in real life.

My country, Valonia, has always been a lively place. However, thanks to COVID-19, everything is ruined. I often come to my balcony to clear my mind. Today, the streets are unusually silent. All of a sudden, I hear sirens and see military vehicles patrolling the streets. They are ordering the citizens to evacuate. We are now moving to the bunker close to our city. These bunkers were constructed when Valonia was a part of Traiscol. People were already frightened about increasing COVID victims, and now we are moving to a crowded place? What will happen to everyone? The people are in chaos. I feel dizzy. A flash of my dreams went through my mind. Now I understand why I’ve been feeling as if this is my second time in this bunker.

“It is Lieutenant Colonel Berto,” someone shouted. I’ve known him since my childhood as my uncle. We both had a conversation about my dream just a while ago. Now he is here to address the people. “Traiscol is attacking our country, we are yet to perceive the reasons. So we had to move you all to this place. I know that this is a tough time for all of us, so we must face it with a strong soul. I assure you we can handle the virus once we deal with the present situation. Citizens of Valonia, we are stronger than anyone else. If the government fails to make peace, we expect you to aid us in the upcoming war,” he said.

The crowd is responding positively. My uncle has always been like this. His speeches always have a strong impact on people in any situation. Before this speech, I messaged and called him several times, but he didn’t respond. But he came to meet me directly. I told him about the dream I had. He was confused about whether to rely on my dream or not. Colonel Berto couldn’t think of any other alternative. He went out for 10 minutes, and I waited until he came back. “According to what you said there are four bunkers like that, can you explain in more detail?” he asked. “ I told you everything I know and could remember, please take care of this soon, before someone is hurt,” I said. He headed out as soon as we finished talking.

It’s been a week now since I last heard from my uncle. At this point, I am thinking about the worst possibilities that my uncle could have encountered.

Soon after, a guard walked in and turned on the TV. I feel relieved at watching my uncle speak to the media on the screen. “People of Valonia, you can all go back to your homes now. We succeeded in sorting out issues with Traiscol. We cannot reveal any further information right now, but all of your suspicions will be cleared soon. Thank you for your cooperation and support.” he ended.

My uncle visited us after we came home and told us everything. He said “After you told me about the dream in which they attacked one of our overpopulated bunkers, I gathered a handful of men briefed them about the attack, and notified the higher officials. We patrolled the whole area near three bunkers one by one, but we didn’t find anything suspicious. We considered aborting the mission thinking that relying on your speculation was a bad idea. But when we were at the fourth bunker, we spotted a Traiscol platoon sneaking into it. We attacked them and rescued everyone in that bunker with no casualties.

While we were investigating, one of their troops begged us to save their country, if they were to tell us the truth. He said that their government is being controlled by someone, and they are trying to take over our Valonia’s government too. He added that the troops were sent on this mission against their will, and they had no other choice because their families were held captive. Our government decided to send experts on a mission to cross the borders and rescue Traiscol from evil hands. All the citizens were made to stay in the bunkers until the experts returned successfully from their mission. This information is confidential. I told you this because you helped us prevent war and I expect you to not discuss this with anyone. I have a lot of work to take care of, so I will leave now.”

The feeling of being quarantined is much better than being on the verge of war. Because of those crowded bunkers, COVID-19 cases started increasing day by day. It will take time for everyone to recover from that incident and this pandemic. Still, I am happy that I didn’t have to experience the war, which I saw in my last dream. Now, we are all back to our quarantine lives, hoping to go back, leading our routine lives very soon.

Aren't all of us artists trying to express ourselves in this world? In my opinion, art is a form of expressing an emotion. Learning how to express our subconscious emotions and communicate with them will take time but what is... END_OF_DOCUMENT_TOKEN_TO_BE_REPLACED

[Trigger Warning] The following article contains acts of cruelty and violence. Reader discretion is advised. I opened my laptop, exhausted from all the classes at college, (not) ready to log in to another class when I stumbled upon “Monster: The... END_OF_DOCUMENT_TOKEN_TO_BE_REPLACED

[Trigger Warning] The following reading contains potentially distressing information about self-harm. The reader is advised to use their discretion to continue reading.   Darkness cocooned her room, her heart twisted, churned, her fingers closed around her throat, nails digging into... END_OF_DOCUMENT_TOKEN_TO_BE_REPLACED

[Trigger Warning] The following reading contains potentially distressing information about violence, brutality and sadistic practices. The reader is advised to use their discretion to continue reading. “For the last time, you don’t have to do this. They will finish the... END_OF_DOCUMENT_TOKEN_TO_BE_REPLACED