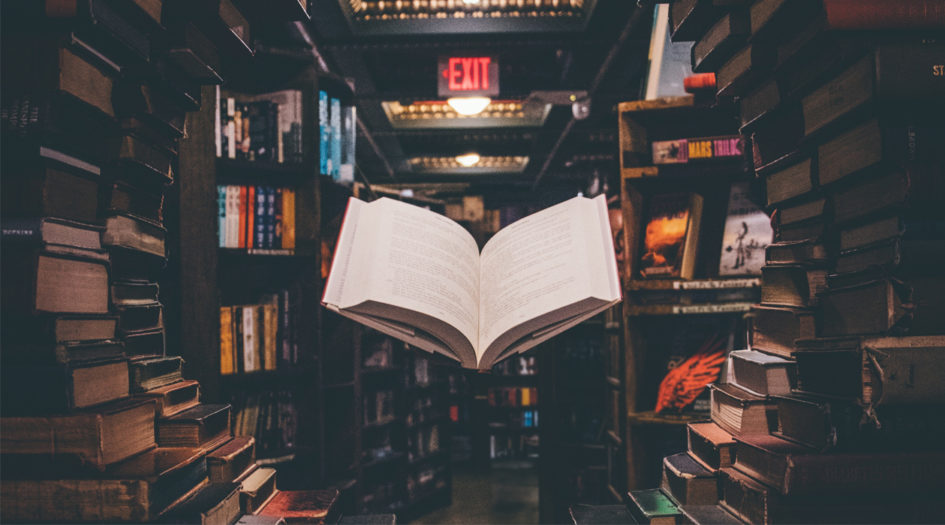 “As he holds you in his arms and looks at you like you hold all the secrets of the universe, you get lost in his dark dreamy eyes as the world around you disappears.”

Too fake? Unrealistic? No one you can think of? Exactly.

Do you want to challenge your inner Sherlock? Try figuring out the plot in 50 Shades of Grey.

We are living in a time of irony where there are restrictions on fiction. There is no imagination running wild drunk and free on the streets of Asgard.

Imagine walking into a bookstore on a quest to entertain yourself with some fiction. You stroll to the right aisle and you don’t let the covers make the choice for you, so you flip to the back cover to go through the plot summary.

Now here is how this part of the journey would go. You will have shelves full of books with the same idea.

We have a hero, who is not accepted in society and/or whose parents are dead. The whole universe turns to save the day as he faces multiple hardships and falls in love with his genius sidekick on the way.

If not this, you have a dystopian universe where the hero gets to know about some very well placed leak in an institution. And it is now up to them to unveil the governments’ evil plans and to save the innocent citizens from their clutches/to stop them from testing on the people. The hero saves the day and all peace is restored.

Or we can go down the track of there being an age-old prophecy and it is finally time because the hero has come to age and this demon has awakened and needs to be destroyed and the hero needs to go on a quest to find the appropriate weapons to vanquish the beast, while simultaneously finding himself a love interest.

It is the same old story again and again. And there are only so many times one can read it without getting sick and tired of predicting the exact ending every single time. The thrill of reading the novel, being unable to put the book down till you find out how it ends. All of it disappears.

Now, this is where fanfiction comes into play, it is a gateway to the world where all the things you wished happen. It is that magical realm where you go past the bounds of fiction you find in your bookstores and libraries and discover something new.

Now imagine this: Bella Swan thinking for a moment before she does something and Edward Cullen having more than two expressions.

It is also where every fangirl’s dreams come true. And mind you, just because your ship is canon does not make it any more superior than mine. Quality Dramione or Destiel is served (Google).

“Fanfiction” as the name suggests, is fiction written by the fans belonging to a fandom. Now you don’t need to be ACP Pradyuman to figure that out, do you?

Finding good Fanfiction is like searching through the million aisles of a thrift shop, trying to find that one shirt in that one color of that one specific material you touched when you were 5. And the internet is one of the biggest stores you will ever find. 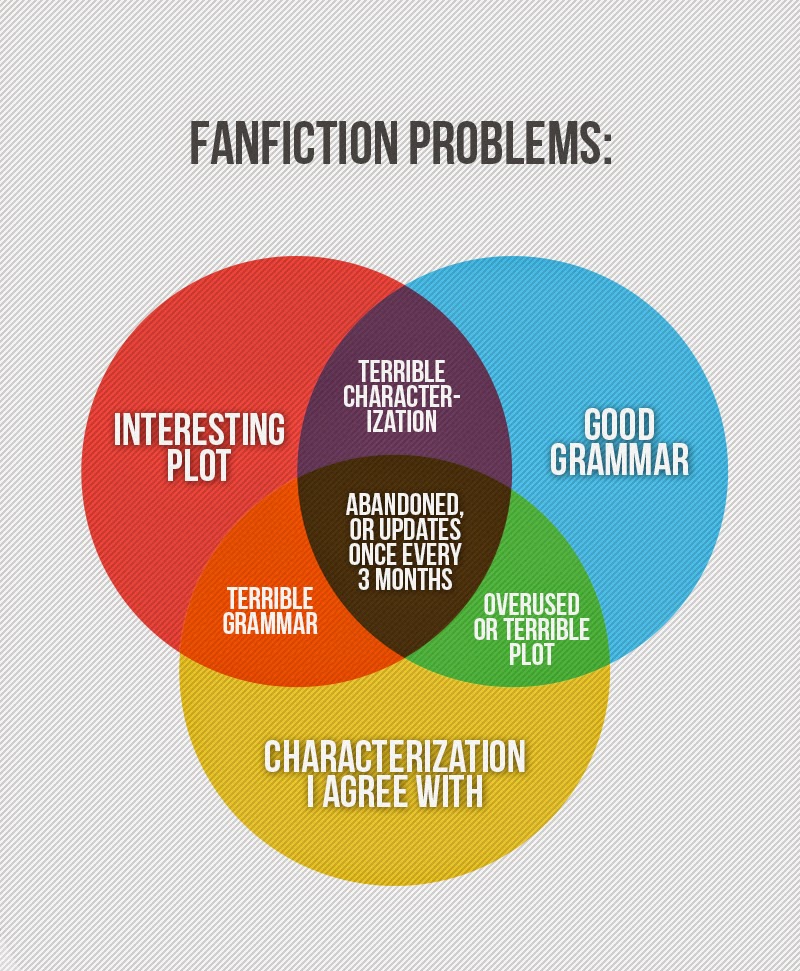 You need to get through a lot of junk and unnecessary drama to find something worthwhile.

All those things you wished you could see during the Hunger Games? Fanfiction’s got you covered.

Now you can’t find a book about a vampire doctor tasting his patient’s blood to figure out what they are sick with. Or a dragon as the ruler of a peaceful land. Or faeries running a bakery while mixing potions in your cake and cookies. Have you ever considered reverse fairytales?

New plot twist: What if Percy Jackson was not the prophecy child. Or what if SasukeXNaruto were to be canon.

Food for thought would definitely be trying to picture the young witches and wizards of Hogwarts fight a different kind of battle in a mundane normal high school.

The Infinity War ending was too harsh for your soul? It’s okay, fanfiction’s got your back. A band-aid that can cover up any wound.

We have the DC and the Marvel universes but think of the ever gorgeous BTS members in their own superhero-verse.

Fanfiction starts off as a hobby, something you read to pass time and to ease the burn…but soon it sucks you in. A black hole of feels, angst, fluff and smut that will leave you mush, giggling or sobbing. It tells you things you didn’t know about yourself. Its where one’s imagination overtakes Usain Bolt.

I tend to keep away from mainstream Indian fiction as it is nothing but a manuscript for most Bollywood clichés, and also because I know that somewhere they would rub me the wrong way. Despite my efforts, I did end up skimming through a book or two and have noticed a few things.

With authors like Chetan Bhagat and Durjoy Datta who claim to be experts in the women department, they barely know anything about women. They portray the world from their point of view and deem it correct. If you were to think rationally, you will realize that no woman’s dream is to be objectified, no one wants to throw away their self-esteem only to please another. And honestly, I can keep going on and on.

Fiction is supposed to have no bounds…but at what cost? Young adult drinking because it’s cool, dating because it’s “in town”, going out of their personal bubbles because it would make them popular? Having such a huge fanbase, their young fans are led to believe all of it to be true. They try to mold themselves into main leads while losing themselves in the process.

Fanfiction by nature takes it all into account. People writing first-hand know how hard it can be, to go out of one’s comfort zone. It does not make drinking or taking drugs a pretty experience and nor does it set unrealistic and fake expectations for all the bedroom action that happens.

Writers know the importance of consent and on the same page, they also know that it’s not possible for a person to be so “popular” they are known all across the college campus. As a college student, I myself can tell you there are faces in my class whose names I do not know. 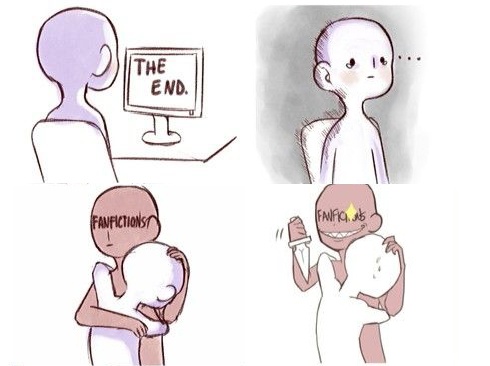 Fanfiction is what helps you survive between seasons, between book releases and the aftermath of a major character death.

You come for the comfort you leave with the pain.

Well, well, well. Something interesting has finally caught your attention in this painfully boring and monotonous life. You dash to the most convenient online marketplace to find the materialistic item that fuels your dopamine rush. These platforms help connect buyers... END_OF_DOCUMENT_TOKEN_TO_BE_REPLACED

Hope was an absurd emotion.   It was a chilly midnight when it happened for the first time. Monique was a light sleeper. After all, it didn’t take much more than a dull, heavy thud for him to jolt awake... END_OF_DOCUMENT_TOKEN_TO_BE_REPLACED

“How long are you planning to cry and sleep in here?” I asked her, as I raised the blinds in her dark bedroom. Seeing the chocolate wrappers and empty Ramen cups spread across the room, I couldn't help but sigh.... END_OF_DOCUMENT_TOKEN_TO_BE_REPLACED

Police sirens, an opened door, a step out of the flat that had been an abode and a prison for 6-years-9 months-23 days—freedom at last?   Julian Assange was under no such false impression as the British police dragged him... END_OF_DOCUMENT_TOKEN_TO_BE_REPLACED

From a very young age, we are socialized to behave according to our sex. Boys are taught to be “masculine” and girls are taught to be “feminine”. But are there any biological differences between a man and a woman which... END_OF_DOCUMENT_TOKEN_TO_BE_REPLACED