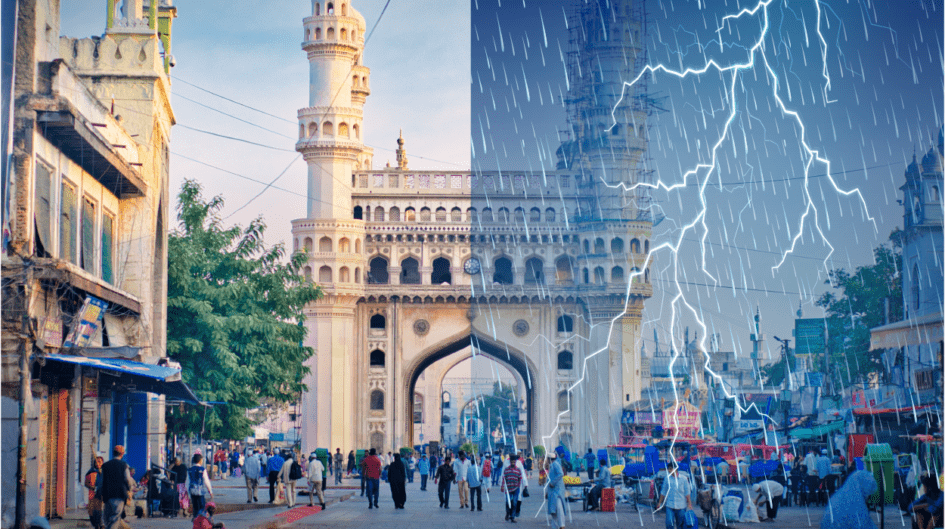 Hyderabad is a city known for great food, the warmth of its residents and liveliness throughout the city. However, being a resident of Hyderabad for twenty-one years, I could not help but notice the changes in climate in the recent months. The untimely heavy rains in the evenings and scorching heat in the afternoons are some major concerns in the city. It is important that everyone puts in efforts to restore normalcy.

The months of June and July have been rather dry this year. These are the months when we usually experience rainfall and unfortunately, this time it had been the complete opposite of what was expected. The city was very close to running out of water resources which would be very difficult had that been the case. As per the records collected by reliable sources, Hyderabad recorded its highest ever rainfall in the last hundred years in the month of September. It’s very unusual that September brought heavy monsoons. In fact, Hyderabad recorded its third wettest day in the past hundred and eleven years this year. The rains not only brought a lot of havoc and destruction, but also led to a loss of lives. There were a lot of inconveniences right from the roads being filled with water to risky dangling electrical wires and lightning strikes.

The point to ponder upon here is what caused the unusual change in the climate. Climate change is real, it’s true and it’s scary. The day is here and we cannot ignore it. We cannot turn a deaf ear and we cannot run away from it. However, we can try our best to fix it. Let’s first talk about the problem. So according to sources and climate change experts, we are experiencing a gradual shift in the local climate here in Hyderabad. Strangely, there are depressions forming in the west-central Bay of Bengal and a couple of depressions forming near Odisha and Andhra Pradesh. This year, the normal behavior of these depressions have been affected as they do not seem to be traveling northwest towards Gujarat and Rajasthan. On the other hand, the states of Kerala and Karnataka have been rather dry. According to the experts, high carbon emission into the air could be triggering the rains.

“Our lives revolve around seasons, but now due to a high concentration of carbon in the atmosphere, the rain and wind patterns are going haywire. This is triggering more depressions and more rain off the AP coast. Without any short-term or long-term policy, you will see more of these weather patterns”, said Sanjay Vashist, a top expert at Climate Action Network. “There is no doubt that we are witnessing something unique and it’s the result of climate change,“ says RV Subba Rao, an expert in studying the weather charts. Now isn’t it daunting? It surely is. Well, I’m sure we have all heard so much about the concerns that we are now at a point where we realize the importance of what is at stake. Climate change did not occur in a day. It has been a continuous series of activities and the solution to it can also not be executed in a day. It will have to be a continuous series of activities.

“Climate change and increasing global temperatures are resulting in greater variation in monsoon patterns and this is only going to increase if global temperature rises and carbon emissions are not controlled immediately. The intensity and distribution of monsoon is going to be impacted and we have been seeing increasing trends towards that,” said Siddharth Pathak, head of Political Advocacy, Climate Action Network International. Carbon emission seems to be one of the biggest causes to have triggered the heavy monsoons. One of the simple but most impactful ways to bring down carbon emission is to cut down on automobile pollution. Carpooling, using public transport, riding bicycles to short destinations are some ways we can adopt. These options will definitely put us outside of our comfort zones but it is the need of the hour. It’s only one tip but I want to limit it to that because I know that one step of ours will take us a long way.

As daunting as climate change sounds, it’s unfortunately real. However, it’s not inevitable. It’s not too late, it’s never too late. The extreme climate in the past few months really made me think about where we are heading to and that is what inspired me to write this article. If we all read and understand climate change, it’s root causes and solutions, we will eventually succeed in making things better and restore normalcy.

“If only our eyes saw souls instead of bodies, how very different our ideals of beauty would be.” ~ Anonymous   “I wish I had a body like her….” “I wish my arms were like his…..” There are so many... END_OF_DOCUMENT_TOKEN_TO_BE_REPLACED

“Where you gonna run?” the voice was harsh. I let out a painful cry as he grabbed my wrists and pinned them together in a tight grip. I could feel my heart throbbing inside my chest as my breathing became... END_OF_DOCUMENT_TOKEN_TO_BE_REPLACED

Life took a horrifying turn for Sushma after that fateful day. The day that changed her life. There she sat under the windowpane, dressed in rags, her hands bruised. Her eyes were swollen and tears ran down her cheeks. How... END_OF_DOCUMENT_TOKEN_TO_BE_REPLACED

The year is 2010:  The beginning of a new decade and a fresh start. While most of us were enjoying the age of innocence, we were most certainly unaware of the uprising revolutions and changes surrounding our nation and all... END_OF_DOCUMENT_TOKEN_TO_BE_REPLACED

Dear subhumans Now that most of you have failed your new year’s resolutions and have lost faith in your life, I think it’s time to forget what a failure you are, by filling yourself with nostalgia from the last decade.... END_OF_DOCUMENT_TOKEN_TO_BE_REPLACED