Wings Of Fire Laid To Rest 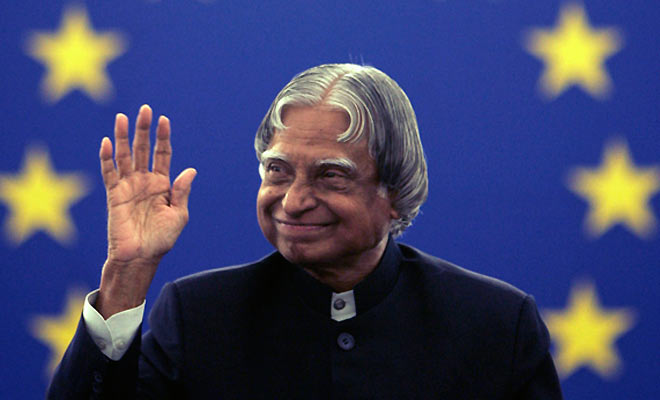 He Bids Adieu On Wings Of Fire

My message, especially to young people is to have courage to think differently, courage to invent, to travel the unexplored path, courage to discover the impossible and to conquer the problems and succeed. These are great qualities that they must work towards. This is my message to the young people.”  -APJ Abdul Kalam

India in the 1970’s was still scientifically under-developed recovering from the clutches of the British Rule.
ISRO was finding a way to develop satellites and missiles that could stand the test of time and striving relentlessly to be considered one of the few countries that could send satellites into space ,and command the respect of the International Scientific community.

APJ Abdul Kalam was responsible for the launch of Rohini and was the head scientist in developing the indigenous PSLV- Polar Satellite Launch Vehicle.
In the 1970’s, Kalam also directed two projects, namely, Project Devil and Project Valiant which sought to develop ballistic missiles from the technology of the successful SLV programme. Despite the disapproval of Union Cabinet, Prime Minister Indira Gandhi allotted secret funds for these aerospace projects through her discretionary powers under Kalam’s directorship.
Dr.Kalam played an integral role convincing the Union Cabinet to conceal the true nature of these classified aerospace projects.

When he was offered President-ship he was advised by his colleagues not to take up the position as it would only weaken him as a scientist at the top of his field but he was undeterred.For he was an educator at heart ,wishing to inculcate a deep sense of scientific curiosity amongst the newer generations of India and he did so by giving guest lectures at many educational institutions.His first order after becoming President was to give a speech at a small local school,which is a testament to how he would lead the country.
He went forward to revive Nalanda University-the one of great historical significance ,but he resigned as he wasn’t happy with the way people wanted to make it an institute similar to Ivy league universities like Oxford and Harvard rather than bringing it back to its natural  and former glory.

There is no doubt that we need highly educated ,compassionate people at the helm of the country leading it to greater academic heights and scientific stature.
As a student I still remember the numerous space clubs forming in local schools under his advise which further ignited a child’s thirst for knowledge of the stars and beyond ,increasing the keen sense of curiosity that will lead to more students considering pure science and research as a possible career path.
His modest background has stood as a beacon for all those students who wish to pursue a career in science and technology but don’t have the monetary backing to do so.

When the Mars orbiter mission was successful ,the New-York times had blithely made fun of our capability of doing this on limited funds.
It is a travesty that we are still subject to such a discriminating and partial view.
As an economy that supports the second largest population we strive to strike a balance between scientific development and providing livable conditions for a highly impoverished nation that is still dealing with poverty,discrimination amongst other social issues.Development for development’s sake will not be suitable for a country like ours for we haven’t plundered or snatched wealth from tombs and temples but rather relied on our countries rich natural resources and business acumen.

His support for the “Make In India” campaign was demonstrated through a tweet reminding us that we need to be more self-reliant because we definitely have the resources to do so,but we need to able to see the potential in ourselves before  anyone else can.

“Some thoughts and experiences on Make In India

In 1975, ISRO needed Beryllium Diaphragms for a new device. Today, you can see this Diaphragm in high quality audio speakers. But, four decades back, a few nations had the ability to make them. Hence, we approached a US based company which agreed and the paperwork was readied. Just when we were about to complete the transaction, the US Government had blocked the sale as this material was being used in their strategic missiles.
Denied of a critical product, we started learning more about it. The US diaphragms, were made from Beryllium rods produced in Japan. We further discovered something startling. Beryllium is a rare element, and only a few countries possess it. India was among top-4 producers of raw Beryllium. The Japanese company which produced the rod, imported Beryllium from us. We were dismayed to know that a product whose raw material we possessed, almost exclusively, was being denied to us. Then a committee of top research laboratories was constituted and given the challenge to make a Beryllium Diaphragm of our own. In four months, we triumphed.-Dr APJ Abdul Kalam”

His candid nature was what made the great scientist approachable by newspapers and students alike.
He once posted a question on Yahoo answers ,to which many great Indians at the top of the field replied to the best of their ability which clearly shows us how open he was to suggestions on protecting the country and setting a precedent for all Indian democrats and politicians to embrace technology for what it can bring , a uncensored, two-way communication portal between the citizens and the government raising democracy to greater heights by not only representing the citizens of a nation but taking their dreams,aspirations and opinions into account while making life-altering decisions for a population that is 1.2 billion strong.

When a fifth standard student asked him about his hair style,he gave the best answer possible,”Does it not suit me?”.

He devoted his life to the betterment of the nation investing his salary in providing opportunities for the students that cannot afford the same opportunities as those in urban areas.
His untiring efforts to spread knowledge and increase scientific curiosity can only be shown by the fact that even until his last breath he was speaking to students and professionals at IIM Shillong about the new Earth like planet that was recently found and about other habitable planets that seems to be one of the major concerns of the scientific community as we need to find other life sustaining planets close by to be able to mitigate the effects of growing population and pollution amongst others.

His adviser and closest aide,Srijan Pal Singh(IIM-A graduate) tells us that Dr.Kalam planned to give the students of IIM -Shillong an assignment.
He wanted them to suggest innovative measures to make the parliament more productive which would be put on Twitter for feedback.He tried to engage the youth of the country in the government that rules them.
Forcing us to think about things we  jadedly resign to accepting as something that we don’t have the means to change.

He was a rock-star among the students as his arrival was met with thundering applause.He was even thought to be as popular among the kids as Pandit Jawaharlal Nehru ,but what made him so amazingly approachable was his immense compassion and understanding towards everyone.

It is unfortunate that his death was so sudden, but it consoles the nation to know that he died doing something he loved -spreading knowledge.

I consider myself lucky to have been influenced by a man so great and feel sorry for all those younger to me ,who won’t know the brilliance ,temerity and the sheer modesty of the  “Missile Man” of India. Flash, Flash, Flash. Various screens show the face of the actor. A woman crying in the corner while another loves the visual of her crying. The editor looks at all of these different shots and lets out a satisfied... END_OF_DOCUMENT_TOKEN_TO_BE_REPLACED

“What is it about being blind that it makes you want to walk the dog the whole time?” “When it comes to environment, it's not us but our children and our children's children that will pay for our mistakes, which... END_OF_DOCUMENT_TOKEN_TO_BE_REPLACED

Comfort space is personal to every individual. It allows you to be yourself and cherish the moments as they are with no judgment whatsoever. As for me, movies and music do the job. Speaking about movies, I have been exposed... END_OF_DOCUMENT_TOKEN_TO_BE_REPLACED

[Trigger Warning] The following reading contains potentially distressing information about self-harm. The reader is advised to use their discretion to continue reading.   Darkness cocooned her room, her heart twisted, churned, her fingers closed around her throat, nails digging into... END_OF_DOCUMENT_TOKEN_TO_BE_REPLACED