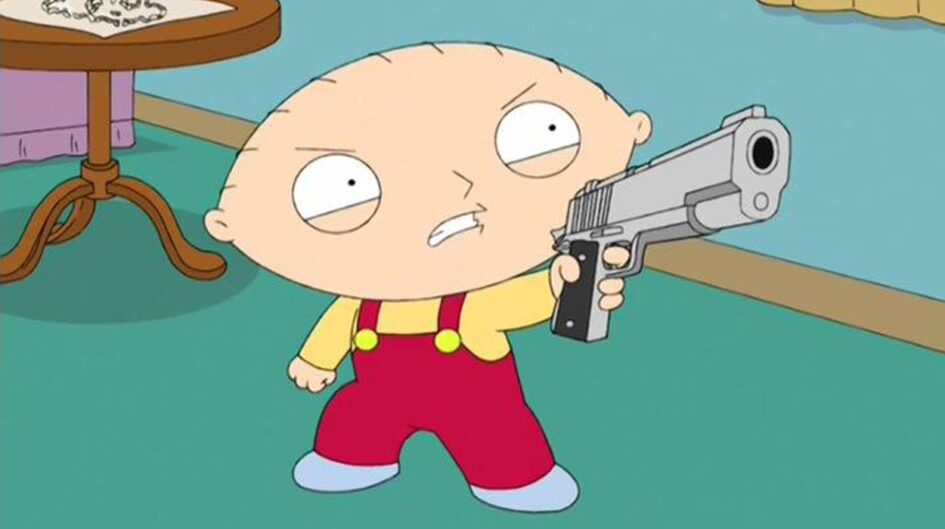 “Sick, twisted and politically incorrect” is a fair enough description for the long-running T.V. show The Family Guy. Peter Griffin, the father, is disastrously ignorant of everything he does. Lois, his stay-at-home wife oversees their three children. Meg, the eldest child, who’s anti-social and insecure thanks to the absence of parental attention. Chris, a grotesque teenager with the IQ of a pebble. Stewie, their genius baby with uncanny intentions of killing his mother and taking over the world. And lastly Brian, the talking dog, who despite being an animal is the sanest being in the house.

Although utterly dysfunctional and replete with offensive and edgy humor, the show has managed to get nominated for 12 Primetime Emmy Awards and in its peak, have a viewer base of 12 million people. Many question the morality of these shows and the reasons why adults and teens are very enticed by the numerous adult cartoons in production. There are two dimensions to answering this question.

Thanks to Netflix and other Over The Top services which enforce little to no censor rules, adult cartoons have no boundaries to the extent of subjects they can experiment with. The humor ranges from jokes on race, class divide, sex, gender, and sexual assault to questioning the current political and social landscape we’re in. But the same leniency has made these cartoons subject to criticism very frequently. Many claim that these shows present more than just satire and that they go out of their way to offend specific groups of people. They accuse the shows of being homophonic, racist, sexist, and filled with ignorant jokes on sensitive topics like cancer and the holocaust. Contrarily, the fans of these shows believe these ‘offensive’ jokes take a dig at the absurdity of the society. These shows portray a non-majoritarian perspective on these issues which in many ways can feel liberating. The edgy dark humor commonly used in most of the adult cartoons is much more palatable, solely because it is being presented through adorable depictions. This makes the jokes much more ironic, improving the quality of humor spontaneously.

Lately, there has been a noticeable shift in the storylines and the extent of humor with the new-age adult cartoons. Although they now have the freedom to explore subjects without any boundaries, they have managed to tone down the offensive humor. The new age cartoons with each new episode, explore a social stigma or a philosophical ideology.

Rick and Morty, is another T.V show speaking about death and the purpose of life through the bizarre misadventures of a genius sociopath grandfather and his worrying coward grandson.

“To live is to risk it all. Otherwise, you’re just an inert chunk of randomly assembled molecules drifting wherever the universe blows you.” – Rick.

The viewers are much more comfortable educating themselves about the social stigmas through a silly cartoon, where it does not seem preachy, but at the same time remains relatable and engaging. These shows have managed to become more than just slapstick humor and edgy punch lines and have used the medium to address moral dilemmas.

“Oh, Marge, cartoons don’t have any deep meaning. They’re just stupid drawings that give you a cheap laugh.”  – Homer, The Simpsons S3 E2

Zestful cross-rhythms of symphonious bells. Undamped reverberations of vedic hymns. Unmistakable aromas of holy incenses. Unfathomable chants of pious devotees. These are the first images that usually occupied my mind when I heard the word 'temple'! I'm not much of... END_OF_DOCUMENT_TOKEN_TO_BE_REPLACED

While great space giants like Elon Musk and Richard Branson are sweating blood to launch rockets for greater causes, this rural kid from India has managed to secretly launch himself to space with no authorization. There’s no way you know... END_OF_DOCUMENT_TOKEN_TO_BE_REPLACED

The scene before his eyes frightened Charles Lyell. He couldn’t tell if he was looking at the same man who ignored his seasickness and spent half a decade sailing the oceans, just for the sake of research. He had trouble... END_OF_DOCUMENT_TOKEN_TO_BE_REPLACED

On 24th March 2020 at 8 PM, TV screens across India flickered in unison as the Indian government announced a 21-day nationwide lockdown as a preventive measure for the COVID-19 pandemic. This announcement caused a complete meltdown of economies worldwide.... END_OF_DOCUMENT_TOKEN_TO_BE_REPLACED