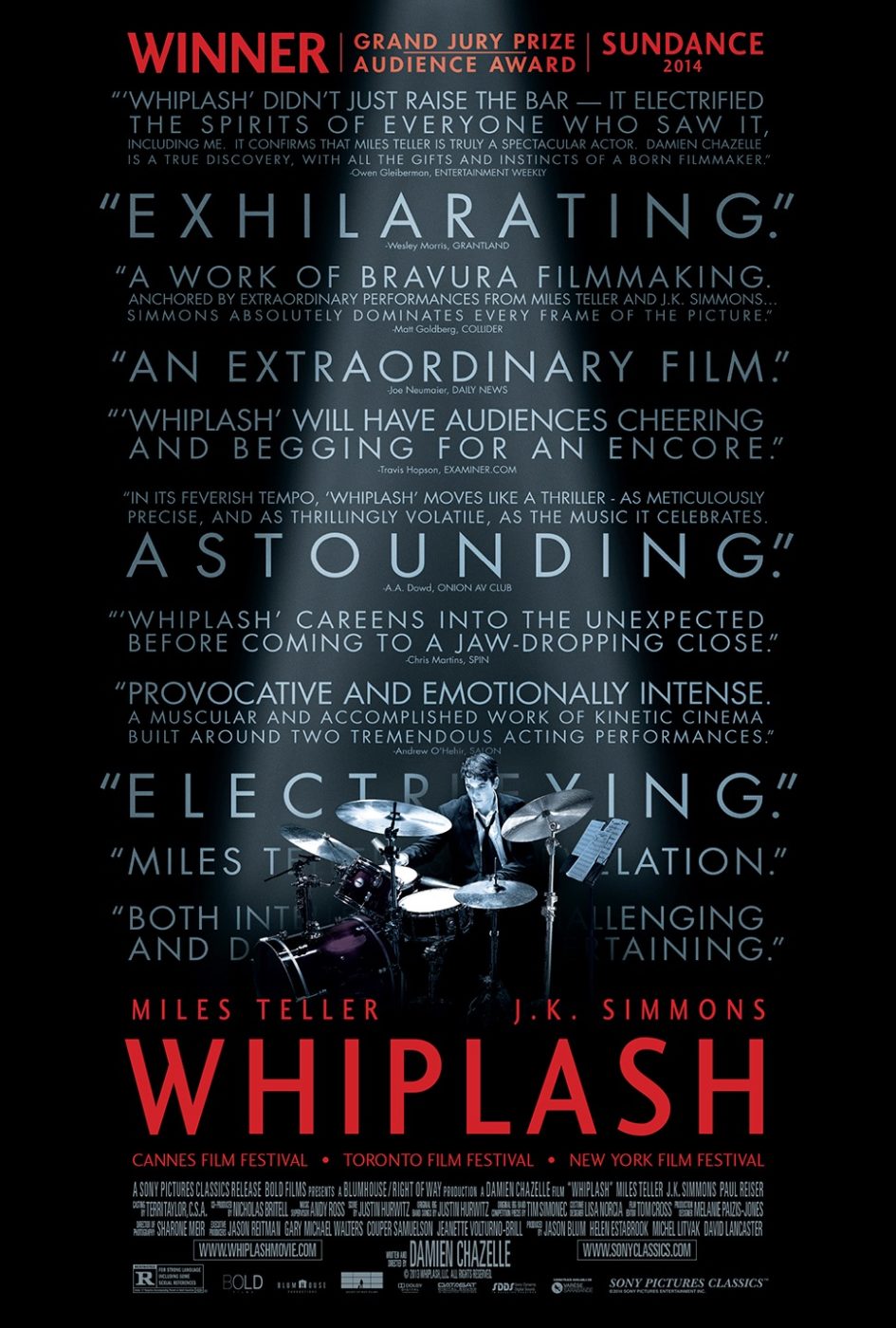 Caution : This movie isn’t for stereotypes!

Whiplash tells the story of a hard working teenager, Andrew Neiman, who is passionate about being a jazz drummer. He trains at a city band school, whose instructor, Terence Fletcher(J.K.Simmons), is as abusive as he’s knowledgeable. A tad bit away from his tempo and you can see the tyranny of Fletcher’s anger descending upon the poor band artists. Andrew Neiman dedicatedly practices the tempos which he couldn’t master and shortly becomes the core drummer of the band. On the day of competition, Andrew meets with an accident, for which Fletcher is to be partly blamed, yet he makes it back to the venue to perform. As the performance begins, Andrew tumbles and plays off beat and loses grip over the drumstick repeatedly. Fletcher holds the performance and asks Andrew to leave, to which Andrew attacks him violently.

Now that Andrew is out of the band, a lawyer representing Fletcher’s former student, approaches him to give a testimonial against Fletcher. Soon, Fletcher is suspended from the music school. The following summer, Andrew bumps into Fletcher performing at a bar and they talk over a drink. Fletcher invites Andrew to play for his new band at a competition and Andrew agrees to it. Just before performance, Fletcher goes up to Andrew and tells him that he knew that he was the one who testified against him and thumps Andrew by playing a different composition which Andrew doesn’t know. Andrew, who is now shamed in front of the whole crowd, goes back stage sobbing. But then he returns and starts playing a known composition which he learnt at the music school and gives in cues for Fletcher and the rest of the band to play along. Fletcher leads the band to compliment Andrew’s jaw dropping solo drum cover and they both smile at each other at the end of the performance.
Andrew ends up giving the best performance of his life and evolves to a different level altogether.

If it weren’t for Fletcher’s unorthodox approach of teaching, Andrew would have never found his inner potential. Andrew’s passion for the music was repeatedly tested and criticised by Fletcher which drove him to be the kind of dedicated artist that he is. But in the eyes of the society, Fletcher is an abusive teacher who is merciless towards his students and by all means punishable under law. But for Andrew, he is just what the doc ordered. Fletcher had the temperament to be the insult which Andrew needed but not necessarily the one he deserved. But that was a risk Fletcher was willing to take. How often do we see teachers losing jobs and risking their lives, in order to teach their students a very subtle point ? Fletcher may not be the best of the teachers, but he certainly brought the best out of Andrew. J.K. Simmons won the Oscar for Best Supporting Actor and the movie also won the Academy Awards for Best Sound Mixing and Best Film Editing.

Well, well, well. Something interesting has finally caught your attention in this painfully boring and monotonous life. You dash to the most convenient online marketplace to find the materialistic item that fuels your dopamine rush. These platforms help connect buyers... END_OF_DOCUMENT_TOKEN_TO_BE_REPLACED

Police sirens, an opened door, a step out of the flat that had been an abode and a prison for 6-years-9 months-23 days—freedom at last?   Julian Assange was under no such false impression as the British police dragged him... END_OF_DOCUMENT_TOKEN_TO_BE_REPLACED

Comfort space is personal to every individual. It allows you to be yourself and cherish the moments as they are with no judgment whatsoever. As for me, movies and music do the job. Speaking about movies, I have been exposed... END_OF_DOCUMENT_TOKEN_TO_BE_REPLACED

Aren't all of us artists trying to express ourselves in this world? In my opinion, art is a form of expressing an emotion. Learning how to express our subconscious emotions and communicate with them will take time but what is... END_OF_DOCUMENT_TOKEN_TO_BE_REPLACED

Hope was an absurd emotion.   It was a chilly midnight when it happened for the first time. Monique was a light sleeper. After all, it didn’t take much more than a dull, heavy thud for him to jolt awake... END_OF_DOCUMENT_TOKEN_TO_BE_REPLACED