Fashion is a trend, it changes with time

With festive season around the corner, we see traditional attire in a renewed splendour. Perhaps the most endearing quality of Indian women is the range of comely apparels that they adorn. Clothing in India, dates back to ancient times. Fashion of traditional Indian clothing with regional variations has been a choice, be it Saree or Ghagra Choli, they remain popular until today and since the early decades of post-independence India. A common form of the Indian fashion originates from the western culture as well from the ancient kingdoms spread across India. Fashion trends have changed through time but the good old Indian wear are popular even today. Where did the trend start ? Well, it originates from the 2500 BC era in the form of simple cotton dresses. Learn more about the emergence of your favorite ethnic wear!

One of the everlasting Indian fashion is of the Anarkali! The Indian version of the ball gown has become the most favored attire of  women. Anarkalis have remodeled from historic times until today. It  hasn’t gone out of fashion since the Mughal era. Anarkalis were first popularized by the legendary performer in Akbar’s court, named Anarkali. 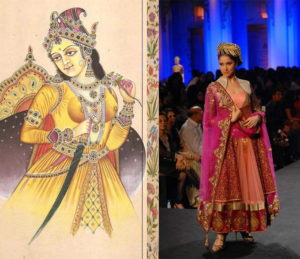 Saree is one of the world’s oldest and perhaps the only surviving unstitched garment. It was probably the earliest form of choli.  Saree evolved from a three-piece attire Antariya now known as ghagra, uttariya known as dupatta and stanapatta as choli which evolved in 1st century. Between 2nd century B.C to 1st century A.D, Antariya and uttariya merged to form a single garment known as saree. Over the millennia, it has not only become a sensuous, glamorous all-time-wear for women, but also the ‘canvas’ for weavers and printers to create artistic weaves, printed materials and fabric with gold-silver embellishments. 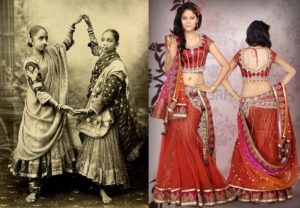 “Peek-a-boo style”, portrays the latest trend of the crop tops paired with long skirts. In 1980’s, cutoff crop tops became more common as part of the aerobic craze and as a result of the popularity of the movie ‘Flashdance’. By the late 1990’s,crop tops had become so mainstream that many schools banned garments that exposed midriff in their dress code. In the 2010’s, the crop tops experienced a revival due to the popularity of 1990’s nostalgia fashion. 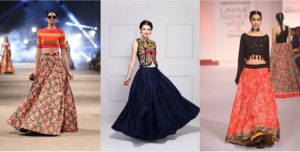 The Punjabi style which is the churidar, is the most worn ethnic dress. It is a common tendency of person to look for a comfortable pair of clothing and churidar is the one. Indian women have been wearing churidars since the ancient time and why not ? given, the comfort. Though they seem to be simple, they are trending in weddings.

The culture of fashion in India has been thoughtfully designed, it is based on seasonal, cultural, historical and even scientifically if we dwell deeper into it. It has been evolved from historic designs and fabrics to the latest fusion of western culture. Every attire has its own significance depending upon region, religion and huge plethora of festive occasions. Fashion is the air,in the street,fashion has to do with the ideas,the way we live,what is happening, it is indeed a trend and it has been changing with time.

“Propaganda” in present-day English, refers to information or media (especially of biased or misleading nature) that is used to manipulate the audience to further an agenda. If you hear the word propaganda, it immediately alerts you to look out for... END_OF_DOCUMENT_TOKEN_TO_BE_REPLACED

“Hand me the gun and don’t move a muscle”, an injured Shankar Narayan whispers to his son, while they take cover under an old Contessa. The little boy does exactly as his father says, his hands trembling, desperately trying to... END_OF_DOCUMENT_TOKEN_TO_BE_REPLACED

Two things have always fascinated me as a child- words and crosswords. Which word should I say? How do I say it? Can it, in its barely ten letters, hardly three syllables, carry the whole meaning of what I want... END_OF_DOCUMENT_TOKEN_TO_BE_REPLACED

As the night grew darker, enveloping an empty street with mystery and fear, it embraced two college students, Matteo and Ace. Drunk and floundering into the dark alley, they hadn't realised how far they had wandered until they came across... END_OF_DOCUMENT_TOKEN_TO_BE_REPLACED

Faith has always been considered as one of the most inherently pure and pious things, across any and every religion and every school of a belief system based on the concept of God. That is probably because every single one... END_OF_DOCUMENT_TOKEN_TO_BE_REPLACED