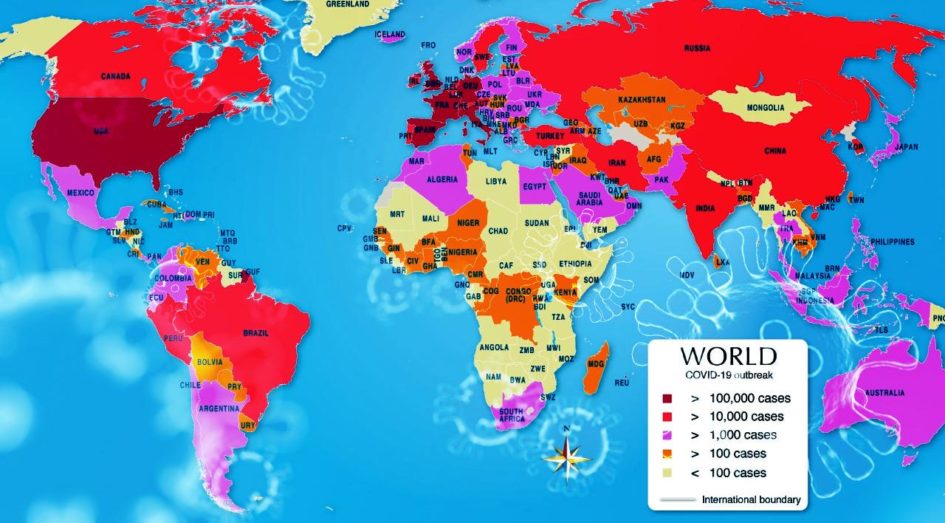 In December of 2019, the Chinese Government reported 41 cases of mysterious pneumonia in the Hubei Province, Wuhan. The investigations deduced a novel (new) coronavirus. It was named SARS CoV2. Similar to the previous coronavirus outbreaks like SARS and MERS it is said to have originated from bats. Bats transmitted the virus to Pangolin, a scaly mammal which acted as an intermediate host and passed it on to humans. It is assumed to have originated from a wet market in Wuhan, where proximity with animals makes it a high-risk environment for such transmissions. In January, the World Health Organization (WHO) set up an Incident Management Support Team (IMST) to deal with the outbreak. They named the disease COrona VIrus Disease 2019 (COVID-19).

The virus affects the respiratory tract and multiplies in the lungs. The patients show symptoms of fever, cough, shortness of breath, and in severe cases, pneumonia. Research shows that the virus was spreading rapidly through human to human transmission. On 11th January, the first COVID-19 death was reported. The first case outside China was reported in Thailand on the 13th. Wuhan declared quarantine on 23rd January and 2 days later the entire province was in lockdown. By the end of the month, around 7818 cases were reported and 82 of them were from 18 other countries.

In February, WHO hosted a research and innovation forum, and around 400 experts and funders joined in from various countries. Experts shared the knowledge of the COVID-19 outbreak and spoke to health officials, scientists, and health care workers regarding physical distancing in hospitals. International citizens who were stranded in Wuhan were evacuated by their respective countries after testing negative after quarantine. The airports began screening passengers with thermal scanners to identify potential COVID-19 carriers and quarantining them for 2 weeks to check if they showed any symptoms.

Outside of China, Italy was the first country to have a massive outbreak of the virus, reaching its peak in February and March, with upwards of 30,000 deaths. Within the next few weeks, it began to reach alarming levels in the rest of Europe and North America. Taking into account the rapid spread of the virus, WHO declared COVID-19 as a pandemic on 11th March 2020. The patients were treated with oxygen, fluids, and ventilators support as no specific treatment was identified. Countries began preparing themselves for the pandemic. By the end of the 3rd week of March, the world experienced a global lockdown. Schools, workspaces, public transport, and all the public spaces were vacated to avoid the risk of infection. People were advised to stay at home and maintain social distancing.

April saw countries preparing for the worst-case scenario, as worldwide cases exceeded 1 million, and started using empty public places as makeshift hospitals equipped with beds, oxygen cylinders, and ventilators. The US death toll exceeded that of Italy which had, until then, the highest death toll in the world. Towards the end of April, New Zealand claimed that the country had managed to relieve itself almost completely of the pandemic, by imposing strict laws and countermeasures. According to WHO, 3,090,445 confirmed cases and 217, 769 COVID related deaths were reported as of April 30.

In May, as several nations relaxed lockdowns, new outbreaks were observed in China and Singapore. Some countries extended their lockdown owing to the rising number of cases. India partly relaxed the travel ban and opened its railways to transport the stranded migrant workers home. Worldwide reported cases crossed the 4 million mark on the 14th of May.

Even amidst a global lockdown, protesters across the world took to the streets to voice their dissatisfaction. Thousands of Israelis gathered to protest against their leader, wearing masks and maintaining a two yards distance among the mob, spectacularly displaying their abiding nature and simultaneously their dissent against the government. On the other hand, citizens of the United States showed no regard for the ‘social distancing’ policies and gathered across cities, as unmasked mobs, protesting for the lockdown to be lifted. The total number of cases in India exceeded 100,000 on the 19th of May.

In the early stages, the only treatment was fluids, oxygen tanks, and ventilator support. Scientists began experimenting with different virus medicines, the biggest one being hydroxychloroquine, the Malaria medicine which was rumored to slow down the progression of the virus. India being the biggest supplier attracted several countries like the US, Canada, the UK, UAE, South Africa, etc. for export of this drug. In May, India successfully exported to 97 countries. But later, WHO temporarily stopped the usage of this medicine as the long term effects of using them cannot be predicted. Currently, it has become the main priority to find a vaccine for this virus. All around the world governments, universities, and pharmaceutical companies are determined to find a successful vaccine. The UK government-funded 20 million euros to Oxford University in hopes of finding a cure. Human trials have also begun. Moderna, an American biotech company published positive results of the phase 1 vaccine.

Around 5.4 million people have been affected so far. Economists state that the world economy has taken a huge hit and might not show signs of recovery until 2021 and also predict that 50 million people could face extreme poverty and homelessness post-pandemic. People are still advised to maintain social distancing and take precautions. As humanity fights this virus, let us remember, ‘And this, too, shall pass’.

Coronavirus: A timeline of how the deadly COVID-19 outbreak is evolving

"Animation is not the art of drawings that move but the art of movements that are drawn” ~Norman Mclaren. Some things in life don’t change, like the craze we have for animation. Right from adoring our childhood shows to never... END_OF_DOCUMENT_TOKEN_TO_BE_REPLACED

“Why do the Yankees always win? The other team can't stop looking at the pinstripes.” The famous quote by Frank William Abagnale Jr., one of the popular con-men specialized in impersonation and forgery, can definitely be taken as the basis... END_OF_DOCUMENT_TOKEN_TO_BE_REPLACED

Trigger Warning: The following content contains a description of abuse and murder which is potentially disturbing. Readers’ discretion is advised.   Did you know that Adolf Hitler was alleged to have paranoid schizophrenia? Many Psychoanalysts pronounced that he had mental... END_OF_DOCUMENT_TOKEN_TO_BE_REPLACED

Love is unconditional. It's received and given in many forms, but it's said that the truest of love is when it's without any limitations. A love for caring about others without demanding much for yourself. The love of acceptance and... END_OF_DOCUMENT_TOKEN_TO_BE_REPLACED

2nd February 2000 Dear Diary, Ugh! Waking up early every single day to attend school is so annoying. I wish we didn’t have school and exams so that I can enjoy myself at home all day long. But that can’t... END_OF_DOCUMENT_TOKEN_TO_BE_REPLACED