Time flies when we’re having fun 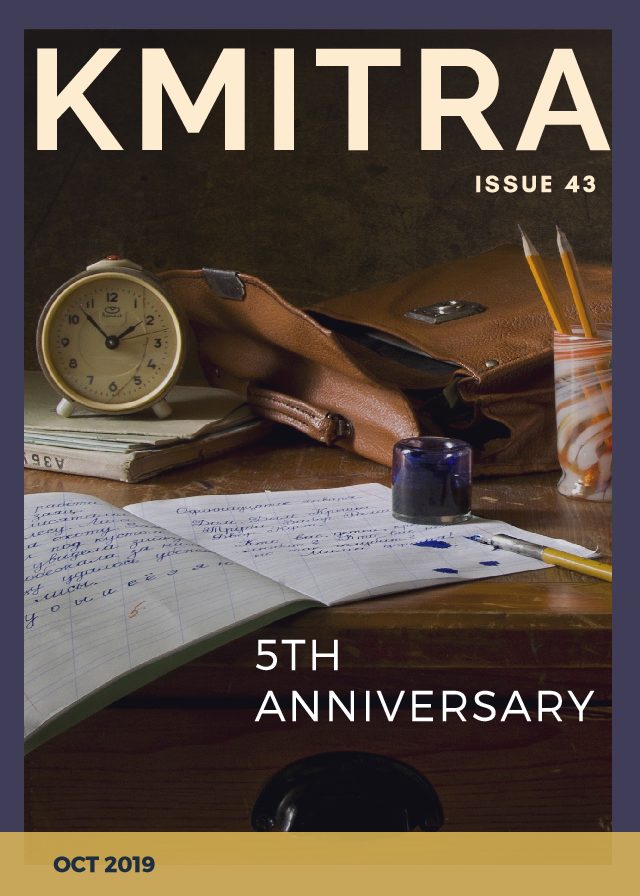 It’s my 5th birthday! The journey in these five years has been incredible. I was initially named Vipassana, later became kMITRA. I made a lot of friends on this journey and every year I get to meet exciting new faces. Even with their busy schedules, a lot of my friends have managed to stick with me and gift me beautiful art every month.

I have no issues with my friends but they have a new one every month and this is their 43rd one. It is the October edition already. Time flies when you’re having fun, and what better way to celebrate this fun than with an edition including write-ups about vacations, festivals, and a lot of other interesting and important topics. Speaking of vacations, we have Suraj’s travelogue, “Dandeli: A Journey with Mother Nature” where he mentions his experiences on a trip to Dandeli.

As time goes by and the ground gets covered by the autumn leaves, the climate around the world has a story of its own. Read all about the climate changes in Nimisha’s article, “Climate Change in Hyderabad” and its effects on our natural resources and solutions to revert the damage in Sweta’s article, “Cauvery Calling: for the river”. The effects have made a huge impact on people all around the world. Shreya has mentioned about one of the famous environmental activists, Greta Thunberg, in her article, “Obsessed with change”.

On the scientific side of things, Sadwi’s article explains a different approach towards time travel in “Why does time only move forward?”. Sravya’s interesting take on the controversial life of Nikola Tesla is mentioned in the write-up, “His Name Was Nikola Tesla”. In a world where people are still not allowed to love freely, Nainika’s article takes a bold approach by talking about the possibilities of a human-robot relationship in “LOVE IN THE TIME OF AI”.

Area 51 is currently one of the most interestingly talked about topics, both in the internet world and the world outside. Sweeya attempts to lay out the myths, conspiracies and the facts about the mystery that is “Area 51”. Mahima’s article, “Denisovans: The Ancient Us” speaks about the theories of the evolution of human beings which may lead to a whole new discussion on our origin.

Ever thought what goes on in the mind of a writer? Raghuram’s article, “Inside your head” depicts an interesting conversation between a writer and his thoughts.

My favorite time of the year for a reason, festivals. Jagruth’s article, “NAV-SHAKTI”, in the mythological genre, explains the nine avatars of the adi shakti during the Navratri or the nine holy days of Dussehra. The other auspicious festival, Diwali and its importance are mentioned in Tanmay’s article, “Divine days of light“.

Pratish, in his article, “Pumpkins of India”, throws some light on the usage of pumpkins all around the world.

Keeping the festive spirit in mind, here’s an article “Navraas and Memorabilia” written by Shubham where he talks about one of the most important cultural events in KMIT, i.e., The Dandiya Night aka Navraas.

Teamwork is the key to the success of any such events. Syed’s article “5 features that make kMITRA a great Team“, speaks about the features which make kMITRA a successful team.

To end the editorial on a sweet note, we have Abhay’s write-up, “Thoughts of a Pen” which is about the story of a pen and its lifetime. Also, here’s a feel-good short story about dreams turning into reality, “A dream come true” written by Radhika.

And finally, if you’re just too lazy to read any of the above-mentioned articles, then Meghana’s journal entries of a procrastinator, “A Lesson Not Learnt”, is the best thing for you.

Hoping that you enjoy these write-ups, with a warm drink in your hand in a cozy corner with a huge piece of my birthday cake on a plate.

Many of us might look back at the time we spent in school with nostalgia and fond memories. But most will also agree that it wasn't the happiest of places with long and monitored study hours, heavy bags full of... END_OF_DOCUMENT_TOKEN_TO_BE_REPLACED

The lockdown, for most of you, was the most boring time of my life. Six months of staying at home didn't do me any good apart from the fact that it brought me and my dad closer by giving us... END_OF_DOCUMENT_TOKEN_TO_BE_REPLACED

“Propaganda” in present-day English, refers to information or media (especially of biased or misleading nature) that is used to manipulate the audience to further an agenda. If you hear the word propaganda, it immediately alerts you to look out for... END_OF_DOCUMENT_TOKEN_TO_BE_REPLACED