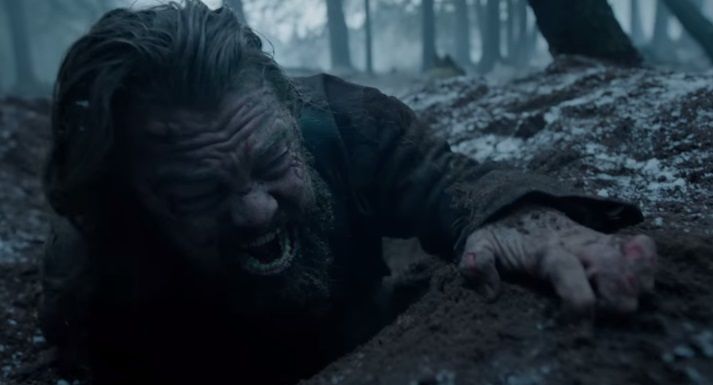 The Revenant is about the will to survive in the face of the bleakest of odds while solely focusing on avenging a loved one’s life. Shot in the wilderness in completely natural light this movie transports you to a time where your survival instincts are the only thing that will save you from death.The scenery was breath taking and I was bowled over with how he managed to capture the harsh brutality of nature without overpowering the beauty of it.The director Alejandro G. Iñárritu, has won three Oscars and his fourth one for directing this movie is well deserved.

The amount of hard work put in by Leonardo Di Caprio  further adds a dimension of reality which leaves you cringing at the horror of facing such terrifying and fatal circumstances.You could feel the pain and empathize with his character through each emotionally disturbing scene from seeing his son being murdered, while rendered helpless to the last scene while he looks right at the audience.While many feel that his performance in this movie was a tad bit mediocre in comparison with his other Oscar nominated performances, I would disagree.He deserved that award and to use the occasion to spread awareness about climate change only lends more to our respect for him as an artist.

Shooting the entire movie in natural light must have proved extremely challenging but the realism it lent to the movie must be applauded.The last fight scene makes you feel the struggle with the blood splattering on the camera every time someone was stabbed.Then the final acceptance and realisation of the character as he floats off the body of his opponent to the Red Indians makes you wonder whether you would have done the same if faced with the same circumstances.
Would you fight to survive a bear mauling?
Would you be able to survive frigid ,sub-zero temperatures to exact revenge?
Would you be able to eat raw meat to stave of death?
Would you be able to crawl into a horse’s carcass to keep warm?
Would you after facing so much, give up your chance to take revenge?

While this is a hypothetical situation, and you would like to believe the best of yourself. It takes a different kind of mental strength to just absolutely refuse to give in.

This movie reminded me of Frontiersman Daniel Boone responsible for settling Kentucky, who as legend has it, similarly fought hand-to-paw with a bear and if I remember correctly a puma and swung on vines (much like Tarzan) to get away from the Indians.I hadn’t read much about the struggle between the settlers and natives for land, but what I did read portrayed them as savages and quite frankly the enemy which is understandable because the literature was from only one perspective.This movie helped me see both sides of the war, that has culminated into the present day America and the way we see it.
There will always be a question poised at the tip of our tongues ,”What could have been if we were not invaded?”.
Would we be better off or worse?
These questions though futile lends this Indian to empathize with the Red Indians who are our namesake.

The lockdown, for most of you, was the most boring time of my life. Six months of staying at home didn't do me any good apart from the fact that it brought me and my dad closer by giving us... END_OF_DOCUMENT_TOKEN_TO_BE_REPLACED

Ayrton Senna. A man whose legacy lives on to this day. Most modern-day drivers look up to him. He has won 41 Grand Prix in 162 races, has been on the podium 80 times, and has won the world drivers championship... END_OF_DOCUMENT_TOKEN_TO_BE_REPLACED

Faith has always been considered as one of the most inherently pure and pious things, across any and every religion and every school of a belief system based on the concept of God. That is probably because every single one... END_OF_DOCUMENT_TOKEN_TO_BE_REPLACED

As the night grew darker, enveloping an empty street with mystery and fear, it embraced two college students, Matteo and Ace. Drunk and floundering into the dark alley, they hadn't realised how far they had wandered until they came across... END_OF_DOCUMENT_TOKEN_TO_BE_REPLACED