The Red Planet in living colour: THE MARTIAN. 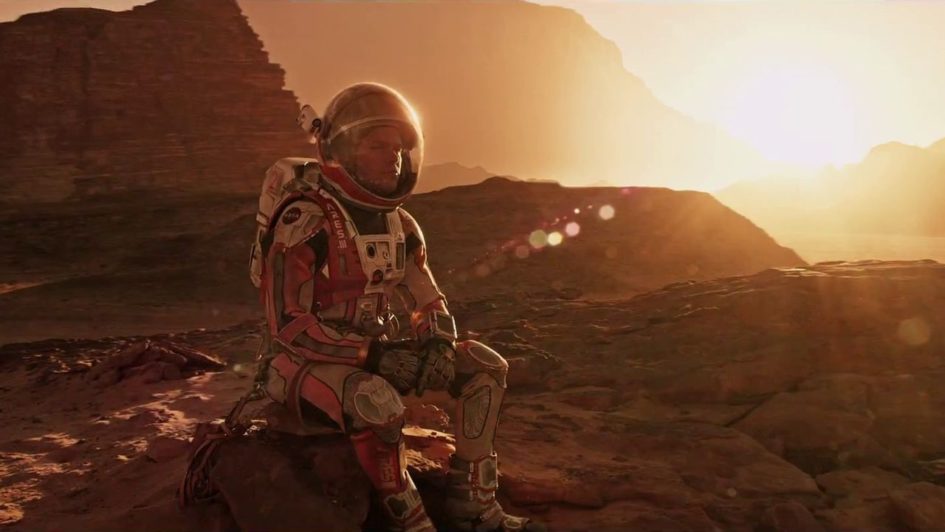 The Red Planet in living colour: THE MARTIAN.

The Martian directed by Ridley Scott, stars Matt Damon, who plays astronaut Mark Watney, a part of a crew of astronauts who are on Mars. A storm rolls in so they cut short their visit. While evacuating, some debris hits Mark Watney and kills him. So the crew leaves him behind, on Mars. Only thing, Mark didn’t die.

Now Mark is stranded on Mars, a planet where nothing is growing and nothing is living. And he has to survive for the good people on earth who have no idea that he is still alive, to rescue him.

So this movie is basically Man vs. Nature on Mars. First of all, I love the way Matt Damon played the character Mark Watney. He’s this likeable, smart guy who is in a terrible situation where he thinks “I’m going to die here”. Then at a point he thinks “No, I’m not going to die here.”. And he just gets to work and starts sciencing his way out of the situation to survive.

But it is a movie about a guy trying to survive on another planet fighting all odds. So, any director would make a depressing, drab and downer of a movie. But surprisingly, this movie is quite humorous. The director, the actors and the writers worked together to translate this humour to you and you are like “Ah! This is not really as depressing as it should be.”

The Martian’s about life, the fight to survive, people coming together to save another human who is stranded on some planet.

I love the supporting cast also, they are just desperately trying to bring this guy back. Chiwetel Ejiofor, who played the character Venkat Kapoor, is one of the best actors in the movie.

I also loved the crew, you know we have to see that he has a relationship with the crew, that you really never see him interact with. This movie pulled that off very well.

It is basically just human race and the fight to save it. It is a very interesting movie. It had everything I wanted it to have- a great director, great writer, great cinematography, great character, great actor who played that character and most importantly, SCIENCE.

Trigger Warning: The following content contains a description of abuse and murder which is potentially disturbing. Readers’ discretion is advised.   Did you know that Adolf Hitler was alleged to have paranoid schizophrenia? Many Psychoanalysts pronounced that he had mental... END_OF_DOCUMENT_TOKEN_TO_BE_REPLACED

"Why does Caesar get to stomp around like a giant while the rest of us try not to get smushed under his big feet? What's so great about Caesar, huh? Brutus is just as cute as Caesar. Brutus is just... END_OF_DOCUMENT_TOKEN_TO_BE_REPLACED

The palette sat on the table, its many children crawling to play with each other. I dip my brush into the palette, squidge it into the deepest shade of blue until the bristles get covered in blue up to their... END_OF_DOCUMENT_TOKEN_TO_BE_REPLACED

Picture a person going through a great deal of misery and sorrow because of some certain terrible circumstances they are in. What expression did you picture this person in? The majoritarian guess would probably be a sad and unhappy face.... END_OF_DOCUMENT_TOKEN_TO_BE_REPLACED

“Why do the Yankees always win? The other team can't stop looking at the pinstripes.” The famous quote by Frank William Abagnale Jr., one of the popular con-men specialized in impersonation and forgery, can definitely be taken as the basis... END_OF_DOCUMENT_TOKEN_TO_BE_REPLACED