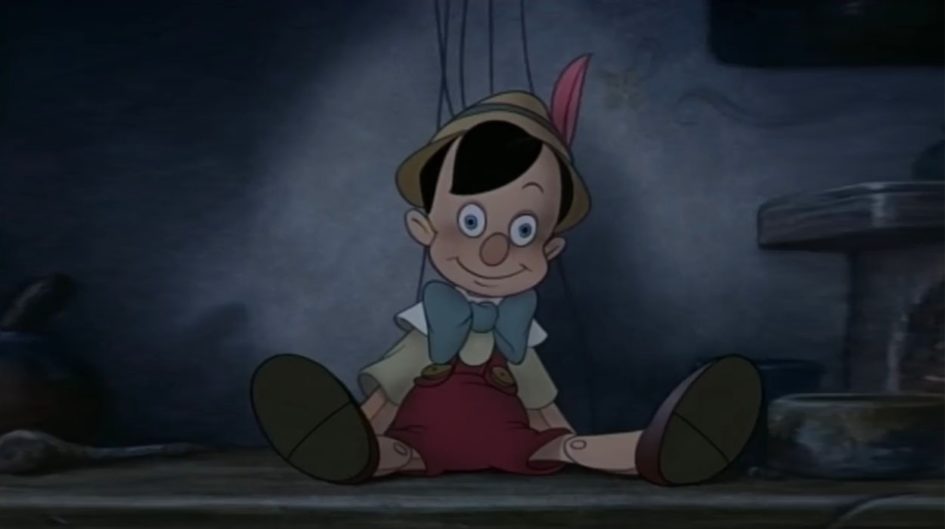 Another day, another boy in the town was missing. That was the sixth in two weeks. Half of the town had evacuated. The rest are either too afraid to leave or are now broken families who have gone crazy due to the loss of their loved ones.

It was afternoon. Dark clouds dawned over the sky. Thunders rolled from above as lightning struck the streets.

Geppetto made his way back home from the market. He trudged through the narrow streets walking past every household that had recently lost a child. As soon as he reached his workshop, he got rid of his raincoat and scurried inside.

Pinocchio sat there on the wooden chair, his back facing him as he looked outside at the empty streets flooded with water. Pinocchio has been awfully quiet the past couple of weeks.

“How are you doing, my son?” Geppetto asks worriedly.

“I’m okay I think”, Pinocchio says but his nose grows a little, giving away his lie.

It was always hard for Pinocchio to make friends. And when he finally made some, they go missing.

Geppetto remembers the conversation he had with Pinocchio after his first day of school.

“Why am I so different papa? Nobody wants to be friends with me.” Pinocchio says.

“What makes you say that?”

“They tell me that I’m not a real boy.” He frowns.

“Just because you don’t look like them doesn’t mean you’re not real. You’re special, my son.” Geppetto says as he gently smiled at the living marionette.

His eyebrows tilted downwards. That wasn’t the answer he was looking for. Pinocchio scowled as best as his wooden features could allow him to.

“Do you think they’ll be found, Papa?” Pinocchio’s sudden question snaps him back to the present.

“I hope so son”, Geppetto says as he takes his supplies inside and starts carving a chair for Pinocchio.

Ever since the random disappearing of children, Geppetto has always been anxious about his own son. Pinocchio was a blessing. How lucky he was to have had his wish come true. Now that he finally had a son, he didn’t want to lose him.

It was a little past midnight when Geppetto heard a scream from the back room where he usually kept all his works. Worrying if Pinocchio was in danger, he immediately took the oil lamp and walked towards the source of the sound.

As he got closer to the door, he nearly slipped. There was something wet on the floor. He bent down, bringing the lamp closer to the wooden floorboards and saw thick red blood pooling out from underneath the door.  Chills ran down his spine.

“Pinocchio!” His hands shook as he slowly pushed the door open.

A rotten stench hit him in the face and his stomach churned violently. He immediately clamped both his hands around his mouth, dropping the lamp.

He could see a dark silhouette of a boy. His shadowed figure moved across the moonlit wall, which the raindrops decorated like running spiders.

There he stood in the middle of the room surrounded by a pile of dead mutilated bodies on the floor. They were the bodies of the missing children.

His body froze. It felt so unreal that his eyes couldn’t believe it.

Impossible! My Pinocchio isn’t capable of doing this.

Those were the only words repeating in his head as he shook his head wildly.

His breaths started to fluctuate as his eyes went around the room and then up to Pinocchio whose brown wooden body was now stained with red blood. He turned to his father. One of his glass eyes was gouged out and replaced with a real one that didn’t fit into the socket. A nose too big for his small features was nailed to his face. A wooden arm was on the floor. And his other still intact hand held a human arm.

Geppetto swallowed. He felt like his throat had desiccated and his moist eyes widened.

“Papa, can you please help me put this arm on?” Pinocchio asked.

With his heart growing heavier by the second, Geppetto sank to the floor barely acknowledging the broken pieces of glass around him.

“What have you done my son?”

Pinocchio tilted his head and flashed a smile. A smile that now consisted of human teeth.

They stared at each other in silence until Pinocchio spoke.

2nd February 2000 Dear Diary, Ugh! Waking up early every single day to attend school is so annoying. I wish we didn’t have school and exams so that I can enjoy myself at home all day long. But that can’t... END_OF_DOCUMENT_TOKEN_TO_BE_REPLACED

What is common to a mullet-wielding, neon-donning 1980s American teenager and their Persian contemporary living in obscurity, confined in the clutches of Ayatollah Khomeini's reign? Hint: it starts with 'rock' and ends with 'music'. In 1979, at the heels of... END_OF_DOCUMENT_TOKEN_TO_BE_REPLACED

Disclaimer: The facts mentioned in this article may vary with the actual ones. "To conquer oneself is a greater victory than to conquer thousands in a battle." – Dalai Lama The second world war reached its final stage in 1945,... END_OF_DOCUMENT_TOKEN_TO_BE_REPLACED

"Animation is not the art of drawings that move but the art of movements that are drawn” ~Norman Mclaren. Some things in life don’t change, like the craze we have for animation. Right from adoring our childhood shows to never... END_OF_DOCUMENT_TOKEN_TO_BE_REPLACED

As I take a stroll in the graveyard observing my funeral, I find a few crying and the other meticulously bored by the doings. Yet it feels so light, death actually took away the pain of my congenital disease. But... END_OF_DOCUMENT_TOKEN_TO_BE_REPLACED