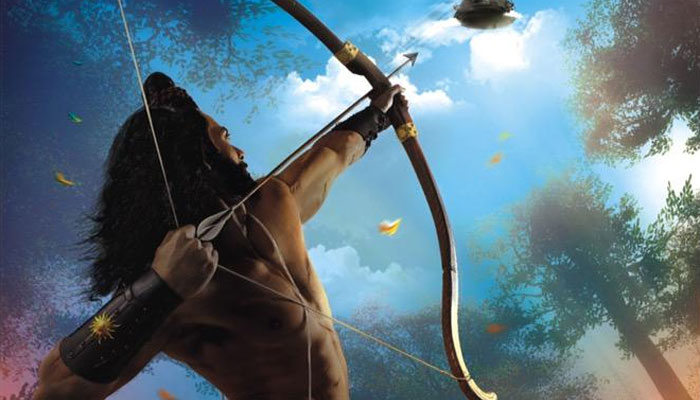 With e-books eating into publishers profit, it seems the marketing dept. at Westland Ltd. has come up with innovative strategies.

Amazon and Flipkart mass ordering the book even before it hits  the shelf ensures it’s success, but what surprised me is their insight into the customers mind.
While many readers buying the book have an innate curiosity of mythology,adding a sentimental keepsake definitely upped the stakes as people would prefer the physical version of the book rather than the e-book which costs less, just to get the weirdly cool metallic bookmark that is propped between the pages of the limited autographed edition.
Amish,the author of the remarkably popular Shiva Trilogy has again put one of the Hindu deities  in relatable terms with the present generation.
He has discussed many social topics (rather shown through example) that have plagued the human condition,and after the frankly horrifying incidents of yester-year ,Ram’s dilemma on whether to avenge his sister’s death brings it all starkly into perspective.

Although we’ve all at some point of time become familiar with the epic Ramayana,he has managed to cast a new light on the story by stating the motives behind certain climactic decisions made by King Dasharatha.

Manthara normally known as the queen’s aide and confidante gets a character makeover in the book that surprised me,while the old animosity between Ayodhyan Kings and Raavan put in terms of economic crises and business decisions, makes things more real and understandable.

One of the many recurring themes that Amish seems to obsessed with is how the caste system would and should have played a role in organizing the masses into a skilled workforce rather than played as a weapon used to create social disharmony and discontent.I find the mass boarding school/training rather impractical but we have to consider the benefits of such a system.While many authors like Isaac Asimov have touched on the same issue stating that such a system would increase a sense of harmony, co-operation and equality,it doesn’t make sense to forgo on diversity and free-speech which could be impeded if such institutions were to come under the influence of the military.Educational institutes have always tried to be independent of the government but many are unsuccessful in doing so and are instead becoming institutes that are highly rigid and callously single-minded  which isn’t conducive to free-speech and unhindered growth.

The defenses of the city of Mithila were very interesting, as was the description of warrior Princess Sita.
Lakshman’s loyalty towards Ram and vice-versa is so beautifully described in the book that it moved me to tears.

Going by the theme of the previous series,it was pretty obvious that Hanuman would be portrayed as a Naga-one who is deformed due to the adverse affects of the Somras ,but he was described near the ending of the book which means the story can only get more interesting.

It takes a lot to bring out the beauty in a tale so old ,without sounding redundant or religious.Amish has done a stellar job with each character, of which Bharath seems to shine through, given his briefer descriptions in the traditional versions.
His description of old cities and kingdoms transport you to a different era and make you marvel at the beauty of  the beginnings of civilization.

The book is an amazing read,can’t wait to see what the rest of the series has in store for us.

Many of us might look back at the time we spent in school with nostalgia and fond memories. But most will also agree that it wasn't the happiest of places with long and monitored study hours, heavy bags full of... END_OF_DOCUMENT_TOKEN_TO_BE_REPLACED

As the night grew darker, enveloping an empty street with mystery and fear, it embraced two college students, Matteo and Ace. Drunk and floundering into the dark alley, they hadn't realised how far they had wandered until they came across... END_OF_DOCUMENT_TOKEN_TO_BE_REPLACED

“Propaganda” in present-day English, refers to information or media (especially of biased or misleading nature) that is used to manipulate the audience to further an agenda. If you hear the word propaganda, it immediately alerts you to look out for... END_OF_DOCUMENT_TOKEN_TO_BE_REPLACED