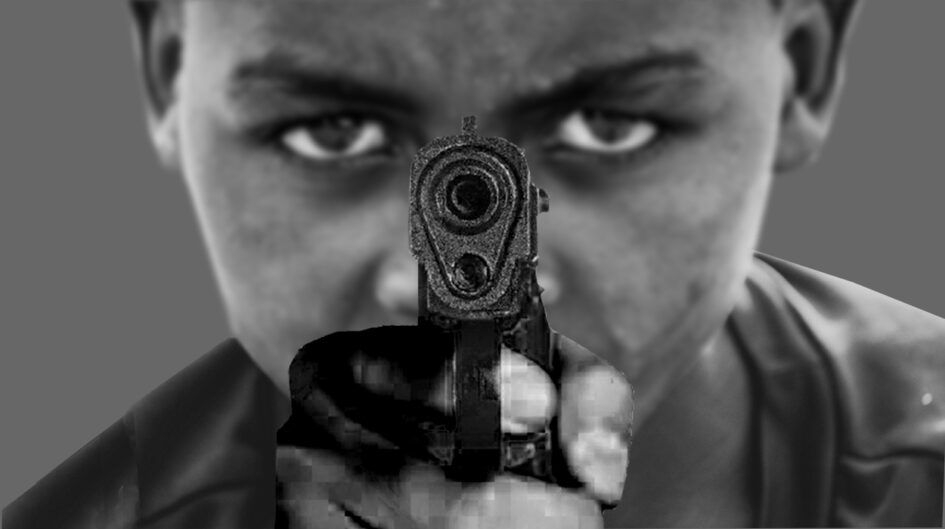 “Hand me the gun and don’t move a muscle”, an injured Shankar Narayan whispers to his son, while they take cover under an old Contessa. The little boy does exactly as his father says, his hands trembling, desperately trying to cloud his fright. Foggy figures start to appear in the
thunderstorm, their boots splattering the rainwater, coming closer and closer to the Contessa. Shankar Narayan cocks the revolver in his hands, trying to take aim, and “Bang!” A bullet spears through the rain and hits something, making a clanging sound. Shankar Narayan slides back and ducks, pulling his son along with him. He sinks his hands into the pool of water, and his expression changes. His face fills with horror. He sees sparks of fire reflecting back from the water. He smells his hands. “Petrol. They’ve hit the tank. Take this and run, Satya”.

“Zap!” jolts an electric shock through his nerves and Satya wakes up clenching a Beretta in his hand, trembling and sweating. He gets out of bed and puts the pistol on the coffee table. He lies down on the couch trying to distract himself from the nightmare, then closes his eyes only to see flashes of images of that night when his father was killed.

He goes back to sleep and in no time, the dream starts playing itself. “Don’t let him get away!” “Catch the boy!” shout men as they chase a young Satya through the streets of Golkonda. Satya, running for his life, panting and gasping, makes it to his house, a chawl in Hussain street.

“They’ve killed him, he’s gone!” shouts Satya as he enters home. The mother starts to weep but is not surprised, as if she already knew this was going to happen. Lakshmi hears men shouting and sees movement through the window and asks Satya to calm down. The men enter the house and behind them comes a meek-looking man.

”Thakur Bhau, my boy is innocent, please don’t harm him.”

Lakshmi falls onto the feet of this spindly-looking man and begs him. Satya looks at his mother, tears rolling down his cheeks when he realizes that in his pocket, is a revolver his dad gave him before he fled. Satya stares at Lakshmi, slowly inching toward the door. He swiftly pulls out the already cocked revolver and shoots the man in the chest. Without wasting any time he makes his move and runs out of the house into the rain. Shocked, the men scamper and scatter in search of the boy who shot their boss.

Thunder rumbles as Satya strides through the streets, trying to catch his breath while running for his life. Bhau’s men scout through the lanes and alleys of Golkonda.

“Please spare him!”Lakshmi screams as she hurries behind the ruthless men.

“We will never be able to catch him like this, I have a plan”, suggests a young lad by the name of Bhiku Mhatre. “There are only four exit points to Golkonda, let’s scatter and block those exits. The boy will be found if he’s making an escape”

“Ah!”, whimpers Satya as he lopes through the lanes of the fort city, blood flowing from his feet. He trips and falls at a junction. He had given it his everything, he was exhausted. Rain poured down on him, washing away the blood on his legs, as he lay there scared to death but unable to run for his life. He closes his eyes and unclenches his fist, releasing the revolver from his hands.

“No!”, screams Lakshmi as everyone scatters to hunt down her little boy, while Bhiku stays back holding her down. He strikes her head with the back of his pistol and pushes her onto the ground. “Everybody come out of your houses”, shouts Bhiku as he fires his pistol into the air,
laughing maniacally as he does it. “I want everyone to witness this.”

Satya hears the gunshots and gets up to hide. He trots into a street and sees lights from houses and people outside their homes. He hears his mom moan and whimper and sees a boy standing next to her. He runs towards her but finds that the boy is holding a gun in his hand pointing it right onto her head. He stops at once, not knowing what to do, tears welling up in his eyes, hopelessness setting right into him making him feel a plethora of horrific emotions. He sees Bhiku turning around and quickly gets into an empty bus parked on the side. He
scampers to the window to see if the boy with the gun was harming his mother.

“Bam!” The pool of water on the ground starts to turn red around Lakshmi as she lay there in the middle of the road, while people watched, completely helpless. “Bang!” whizzed another shot from the boy’s pistol as he cackled raucously. The water grew deeper and deeper in red and the rain stopped. It was dead silent. The men returned reporting they hadn’t seen the boy and that he would have made good of an escape by now.

“He’s alive! Bhau’s alive!”, one of Bhau’s men comes screaming onto the street. “Get inside! All of you get back into your houses!”, shouts Bhiku, as all the residents of the street scurry back into their homes. All the men rush back to the place their boss was shot, leaving the avenue painted red.

Satya gets off the bus, everyone gone, the silence deafening, walking slowly in the pool of gore towards his dead mother, his heart pounding in pain. He sits beside her weeping softly, holding her hand tightly and staring at her face as it goes pale.

“Thud, thud!” bangs someone on the door as Satya is woken up from his horrific dream.
“It’s time!”, yells the voice outside the door.

Satya gets up, picks his pistol up from the coffee table, and goes into his bedroom. “I’ve missed once, I won’t miss again”, he whispers to his sleeping wife, kisses her on the forehead, and walks out of the house.

– Inspired by the 1998 Ram Gopal Varma flick “Satya”, this article stands as a prequel/spinoff for the movie.

Faith has always been considered as one of the most inherently pure and pious things, across any and every religion and every school of a belief system based on the concept of God. That is probably because every single one... END_OF_DOCUMENT_TOKEN_TO_BE_REPLACED

Two things have always fascinated me as a child- words and crosswords. Which word should I say? How do I say it? Can it, in its barely ten letters, hardly three syllables, carry the whole meaning of what I want... END_OF_DOCUMENT_TOKEN_TO_BE_REPLACED

As the night grew darker, enveloping an empty street with mystery and fear, it embraced two college students, Matteo and Ace. Drunk and floundering into the dark alley, they hadn't realised how far they had wandered until they came across... END_OF_DOCUMENT_TOKEN_TO_BE_REPLACED

The lockdown, for most of you, was the most boring time of my life. Six months of staying at home didn't do me any good apart from the fact that it brought me and my dad closer by giving us... END_OF_DOCUMENT_TOKEN_TO_BE_REPLACED