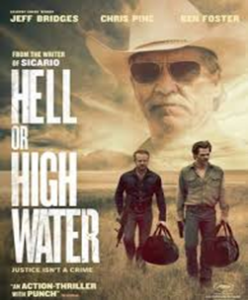 Hell or High Water is about two brothers Toby(Chris Pine) and an ex-con artist Tanner(Ben Foster) who rob the branches of a bank called Texas Midland especially in the early mornings when the services of the bank are not yet resumed so the robbery can be done smoothly without any hassle. This attracts the two Texas Rangers Marcus Hamilton( Jeff Bridges) and Alberto Parker(Gil Birmingham). What really happens next forms the crux of the story.

The movie is truly Texan in its nature. Be it the costumes, dialogues, vehicles, locations reflect the western part of Texas. The amusing factor is that the lead actors always speak in the native Texan accent. Shot in the locales of Eastern New Mexico, the whole place resembles Texas.

Screenplay by Taylor Sheridan is one of the major assets of the film. It is taut and up to the mark. The proceedings are in order and correct. David Mackenzie, who helmed this film was successful in establishing the connection between the lead actors and the audience. He elevated the scenes in a particular manner so that the characters settle themselves neatly in this western crime drama.

The actors delivered stellar performances. Jeff Bridges as the Texas Ranger did a wonderful job. Ben Foster as the angry con artist performed spectacularly as did Chris Pine, an able support to his on-screen brother. The director managed to allot equal screen time for all the actors. The cinematography is excellent; cinematographer maintained that western tinge throughout the film. The art work is apt; be it the buildings they have shown or the cars they have used give the vintage look to the film.

This film is certainly more than just a one-time watch.

One should surely watch this film, come hell or high water!

Well, well, well. Something interesting has finally caught your attention in this painfully boring and monotonous life. You dash to the most convenient online marketplace to find the materialistic item that fuels your dopamine rush. These platforms help connect buyers... END_OF_DOCUMENT_TOKEN_TO_BE_REPLACED

[Trigger Warning] The following article contains acts of cruelty and violence. Reader discretion is advised. I opened my laptop, exhausted from all the classes at college, (not) ready to log in to another class when I stumbled upon “Monster: The... END_OF_DOCUMENT_TOKEN_TO_BE_REPLACED

The corporate industry is notoriously famous for having the highest pay grade difference for employees working in the same company at different levels doing the same or similar jobs. This difference attracts several young engineers and management graduates into this... END_OF_DOCUMENT_TOKEN_TO_BE_REPLACED

“What is it about being blind that it makes you want to walk the dog the whole time?” “When it comes to environment, it's not us but our children and our children's children that will pay for our mistakes, which... END_OF_DOCUMENT_TOKEN_TO_BE_REPLACED

“How long are you planning to cry and sleep in here?” I asked her, as I raised the blinds in her dark bedroom. Seeing the chocolate wrappers and empty Ramen cups spread across the room, I couldn't help but sigh.... END_OF_DOCUMENT_TOKEN_TO_BE_REPLACED