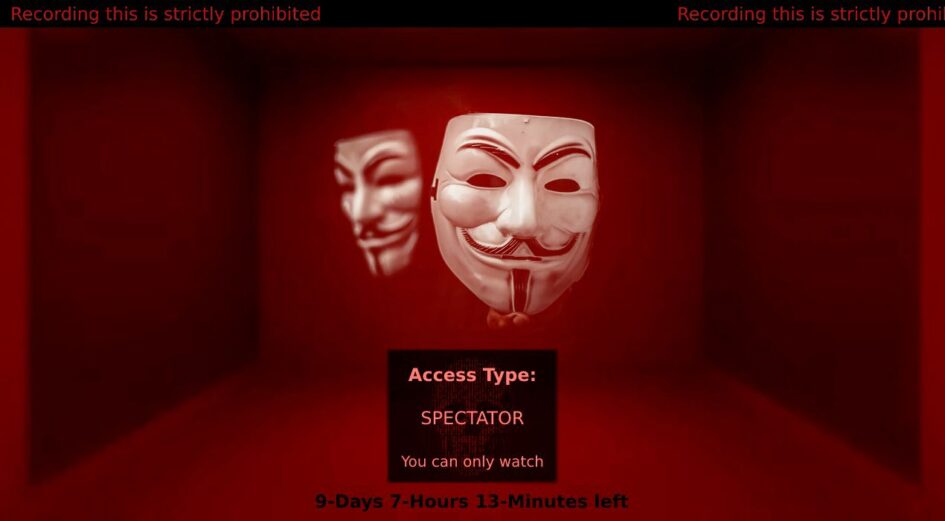 It was a hot, blazing afternoon. I was gaming with my friends. The doorbell rang out of nowhere and I couldn’t think of anyone who would visit me at that time. I opened the door with anticipation.
Weird.
I saw nobody. I checked the hallway twice and closed the door.

Am I hearing things?

In a flash, thick fumes filled my apartment and I collapsed on the floor.

I feel funny. What is happening? Am I being robbed or abducted? Above all, what is that smell?

“Set up the camera!” a muffled voice came from behind me. A gruff hand slapped me to consciousness, and I saw a dark room with three masked people carrying guns and another person tied to a bed.

What’s going on? What are they going to do to me?

“Welcome to the back end of the dark web-The Red Room. Now, are you ready to hurt and kill her?”, said one of the armed men pointing towards the bed, his voice morphed.

I HAVE TO K…KILL SOMEONE?

They put a mask on me to hide my face and displayed some disturbing equipment like sharp-edged knives, nailers and a bloodstained table saw. A live stream started and I had to follow the messages of various spectators who paid money in exchange for demands of cutting the prisoner’s finger, her hand and it only got worse.

The live torture ended with blood on my hands and trauma in my life.

How can you torment someone with no reason whatsoever? How am I going to live with mys-

I felt a jolt and woke up in my apartment.

What the hell is happening? Why was I set free? Was it a dream?

I checked my messages only to find out that I left yesterday’s game with my friends abruptly.

I called my friend and started telling him about what happened. It couldn’t get any spookier because every time I talked about it, the call was disconnected.

Oh my god. I’m being tracked.
What if I went to the police? But it would be risky now that they are monitoring me.
Oh, I don’t have any evidence against them. Damn it. How did I enter this mess?

A new message popped up on my phone.

‘Hello, Mr. Haskell. Go to the pharmacy in Central Street and buy a sleeping pill. If you don’t comply with our demands, you will be killed. Keep a look out for more instructions.’

As soon as I bought the pill, another message dropped in.

‘Go to the Double-Cross Pub down the road and you will find a guy with a green corduroy jacket in a corner booth. Knock him out by mixing his drink with the pill you bought and drag him to your car. Make it look like he’s drunk.’

I kept staring at that message, heart in my mouth.

Abduct a guy? My boring life was so much better.
No, I need to do something right now because this could be my last chance to escape.

I didn’t slip the pill into his drink. Instead, I served him the drink with a piece of paper explaining the situation. I could feel his ‘Who the hell are you?’ gaze as he stormed into the restroom. I knocked him out, dragged him to my car and got into it, and stomped on that accelerator as my life depended on it. He was conscious by now and baffled. We entered the main road. I crashed my car into another, I needed the diversion. I threw my phone into the car to make them think I was still there and we both cut and ran from the crowd.

This is it. I can probably go to the airport and take off from there.

We ran wild. The idea of breaking those chains, especially when you know the taste of freedom, lights your torches.

Then, there was a hiss of smoke. Before I knew it, I passed out.

I slowly opened my eyes and figured I was lying down somewhere.

Where am I? Did I wake up in my apartment again?

I saw a red light hanging above me.

“Wake up!”
Someone yelled at me.
“We are about to start the live stream.”

I turned to my left. There he was, sitting with the same fear I once had. Yes. It was the guy I abducted who was going to torture and probably kill me.

“You forgot about your friend’s phone. We tapped it too.”

“You are not the only ones.”

So it’s a vicious cycle. We become the suspects and get killed before anyone can find us.

It feels like just a week ago when the internet was bombarded with memes of Will Smith slapping Chris Rock at the 2022 Oscars. Ah, what a moment. The Cannes Film Festival too ended just recently, leaving us waiting for... END_OF_DOCUMENT_TOKEN_TO_BE_REPLACED

Did your 8-year-old self ever wish for that awesome Pixar movie that you watched, and you watched, then you watched again, to be real? Because I did!  I had a dream. I wished I was a car so that I... END_OF_DOCUMENT_TOKEN_TO_BE_REPLACED

As the night grew darker, enveloping an empty street with mystery and fear, it embraced two college students, Matteo and Ace. Drunk and floundering into the dark alley, they hadn't realised how far they had wandered until they came across... END_OF_DOCUMENT_TOKEN_TO_BE_REPLACED

The scene opens in a jury room, where a decision is to be taken on the death sentence of a man accused of murder. After voting, each juror explains why they feel the accused is guilty or not guilty. One... END_OF_DOCUMENT_TOKEN_TO_BE_REPLACED