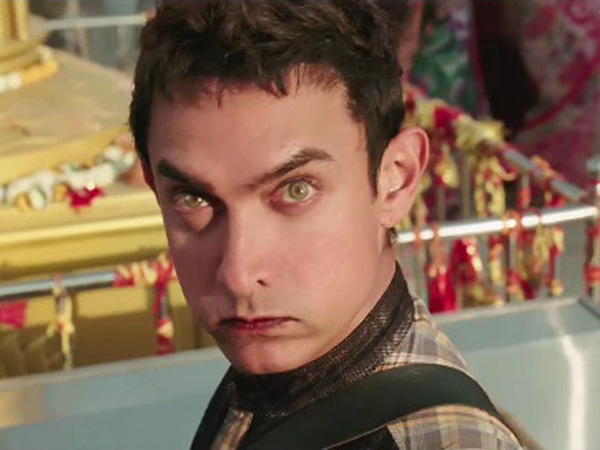 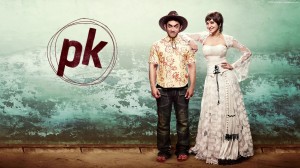 PK (not an acronym!) is an alien who is robbed of his remote controller and so he sets out on a journey to retrieve his lost possession. The way he evolves throughout the journey forms the story-line of PK.

PK’s poster came as a bolt from the blue for many people out there and even managed to irk some moral police. Well, the movie is as bold and symbolic as the poster and may now irk the religious fanatics as well! Just as a new born child, our PK is nude, curious and innocent– a “man-child”! PK moves around with a radio and I did not really understand the symbolism of that in the movie apart from the fact that it saved the movie from being certified “A” rated.

Everything about PK is unique and “literary” – right from the movie title to the songs! “PK” is actually “Peekay” and you must have, by now, figured that out. Songs like “Chaar Kadam“, “Nanga Punga dost”, “Bhagwan hai kahare tu” and “Tharki Chokro” are all interjected to fill in for the dialogues of scenes which needed to be forwarded briskly.

I don’t think Rajkumar Hirani was unaware of the fact that the message he wanted to convey in PK was already highlighted by Umesh Shukla in “Oh My God” which is a satirical comedy-drama. What discerns Rajkumar Hirani’s PK is, one, Amir Khan’s acting and two, variety of religious symbolism. Aamir Khan, with his gollum eyes and elf ears, captivates us with his innocence and charm offsetting the flaws in the movie. Aamir Khan’s par-fe-sun-ism is evident in his top notch dialogue delivery. When Parineeti Chopra tried to copy “Hyderabadi” in “Daawat-e-ishq”, it sounded harsh to my ears. Aamir Khan’s bhojpuri dialogues are beautifully delivered, the nuances of the language so well preserved. Aamir contributes a 3 to my PK’s overall rating of 4/5!

Anushka Sharma friendzones Aamir  for Sushant Singh Rajput and hence she is not worth my appreciation. Jokes apart, her acting is quite natural, nothing different from what we saw in her previous movies. I feel she should start opting for atypical roles rather than opting for unusual lip styles. She seems to have outgrown her girl-next-door image. Sushant is the like the title and credits of a movie- meaning literally and technically.

The problem with PK is that you don’t know if you loved the movie or you disliked the movie but certainly not hated the movie. The jokes are raw, naïve and absolutely hilarious!! Most of the public awakening plot is a re-run of Oh My God! where news reporters are involved, fake godmen are involved, mass awakening is publicized, social experiments are done yada yada yada. Rest is just Oh My God! The way we arrive at a conclusion that PK was right is also very bizarre. You start getting the feeling of ‘so much khichidi for nothing’! There are certain scenes where situations are inserted just for the sake of a single dialogue – nothing short of a bomb-blast! There is a lot of stress on religion-related dictums that, along with the others, forms a basis of the humor track! While you enjoy the humor, you start getting bored of the monotony.

Remember the twins of Dhoom 3? I don’t think the slightly off-head twin died! He came back as PK on our lullified-gola!

The corporate industry is notoriously famous for having the highest pay grade difference for employees working in the same company at different levels doing the same or similar jobs. This difference attracts several young engineers and management graduates into this... END_OF_DOCUMENT_TOKEN_TO_BE_REPLACED

“How long are you planning to cry and sleep in here?” I asked her, as I raised the blinds in her dark bedroom. Seeing the chocolate wrappers and empty Ramen cups spread across the room, I couldn't help but sigh.... END_OF_DOCUMENT_TOKEN_TO_BE_REPLACED

Police sirens, an opened door, a step out of the flat that had been an abode and a prison for 6-years-9 months-23 days—freedom at last?   Julian Assange was under no such false impression as the British police dragged him... END_OF_DOCUMENT_TOKEN_TO_BE_REPLACED

[Trigger Warning] The following reading contains events of death. **This is entirely a work of fiction and no distress was intended for any family/person affected by a natural disaster. “Please Ma!” Arya pleaded. “I made it to my final semester.... END_OF_DOCUMENT_TOKEN_TO_BE_REPLACED

From a very young age, we are socialized to behave according to our sex. Boys are taught to be “masculine” and girls are taught to be “feminine”. But are there any biological differences between a man and a woman which... END_OF_DOCUMENT_TOKEN_TO_BE_REPLACED