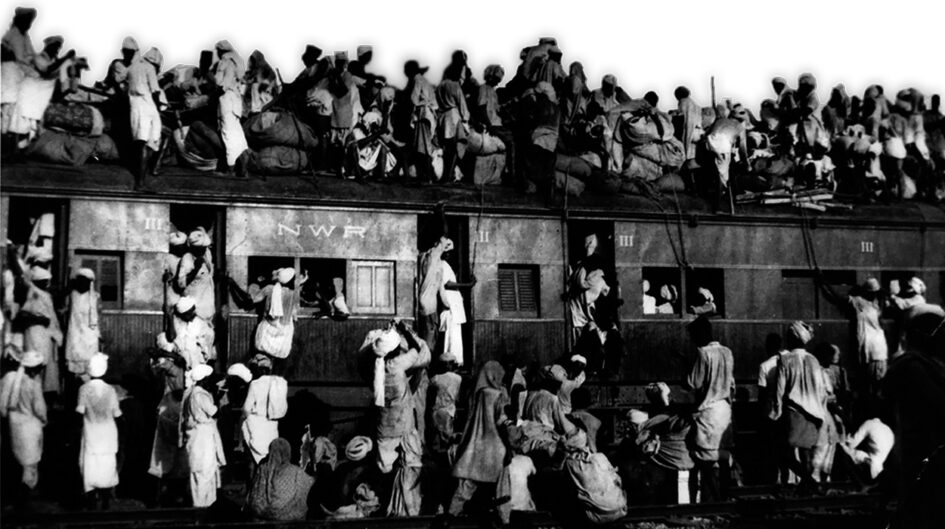 TRIGGER WARNING: This article contains instances of extreme violence associated with The Partition of India and Pakistan, reader discretion is advised.

We returned home from the Gurudwara. I headed towards my room and plopped onto the bed,  shot my head up when I heard my Daadi scream my name “Preet!”. I rushed to their room and saw a frail figure screaming: “NO! NO!! YOU CAN TAKE ME INSTEAD. BANNO DAR MAT YOUR VEERJI WILL SAVE YOU, I WILL SAVE YOU!”. “Dadu!” I gasped as I looked at his weak stature, on his knees pleading to an imaginary figure, his eyes red from all the crying.

Almost as if it were a reflex; I bent down to his level, I wiped the tears off his face as I called him “Dadu” he looked at me, quite baffled. He got up, hugged me, and whispered “Thank God, you are safe Banno, I thought I… never mind”. Then I stood still as I watched him sleep. Dadi put her hand over my shoulder and said, “Let’s have some chai in the verandah.” I nodded.

We sat out on the swing in the verandah, sipping hot chai while silence took over. Dadi slowly placed her hand on mine and caressed it as I stared at the floor. “You were frightened, weren’t you?”. “A little” I replied. “Is his Alzheimers getting worse?” I asked, even when I knew the answer.

“Yes, it is. Dadu is unable to distinguish the present from the past”.

“Is Banno someone from his past?” I asked. Dadi became silent. Not getting an answer from her, I was about to get up when; “She was your Dadu‘s younger sister.” Dadi said.

I widened my eyes, “But Dadu doesn’t have any siblings!”, I said. “He did,” she replied. “What happened to her?” I asked. “She died during the partition,” she replied. I stood still trying to wrap my head around everything Dadi told. People don’t speak much about the partition in Punjabi households. It brings back painful memories.

“Dadi can you please tell me what had happened?”

“You must have read about it in your history class, but the horrors of the partition are events which have to be relived. About 10 million people were slaughtered and more than 20 million were displaced. When the partition was announced people weren’t sure whether they’d be living in India or Pakistan. Blood, famine, cholera outbreaks-these are the words that resonate with the partition.”

“We married young and I was with child when we fled. We were living in Rawalpindi, I wasn’t ready to leave, neither was your Dadu. But we had no choice as we wouldn’t have been alive if we hadn’t left. People were butchered mercilessly, communal riots were nothing unusual, villages were set ablaze, children were stranded crying for their mothers and wives for their husbands.

One night, we decided to leave for India. Only the four of us were left- Dadu, Banno, our unborn child, and me. The rest of the family was going to leave the next day. But couldn’t .” Dadi sighed.

“What do you mean ‘couldn’t’ ?” I asked. “They died. At least as far as I know. That night when we left, dacoits looted and killed everyone who didn’t belong. We had travelled far enough, enough to escape the killings. We walked for two days tirelessly with nowhere to stop. The sights still haven’t left my mind: vultures lined up to feast on the carcasses, children pulling at the hands of their buried mothers, cut body parts…” Dadi looked at my frowning face “I am sorry dear, I’ll stop.” 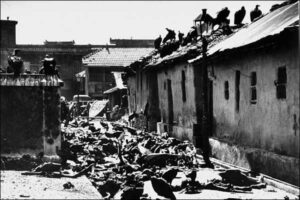 “Finally, we reached the railway station and were shocked to see the huge crowds of people desperately waiting to get on the train. The train was expected to arrive at night. When the train arrived people thronged into the train in huge crowds, all at once. We were left behind, considering my situation Dadu decided that it was better to stay behind and wait for the next train which arrives at midnight. He had asked Banno to get on the train, she didn’t want to. He thought it was better and that she would be safe.” 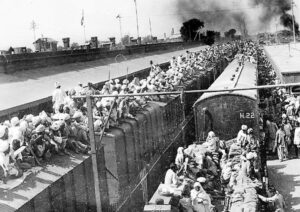 “The next day, he was devastated when he found out that everyone on the train was butchered.

I let out a gasp.

“His whole world collapsed, he let her go. However, he was trying to do the right thing but the unfortunate turn of events made him numb. And then after an hour or so he said, “We’ll be travelling on foot.” “I didn’t question his decision, as trains were more dangerous. After five days we reached the refugee camp in Amritsar. From there on, your Dadu‘s acquaintances helped us out. And we built our lives on the ashes of the past. Your Dadu and I never regretted leaving any of the jewellery or money behind. We only brought what we needed. But nothing can replace the grief we felt when we lost our loved ones…”

“Your Dadu hardly recognizes me anymore yet he remembers Banno. I never felt the slightest bit of remorse at this.” Dadi said after a long pause.

“Because in our 42 years of marriage, never did he once tell: ‘I lost her because of you'”.

“It is the truth bacche.” She said wiping my tears. “Thank you Dadi,” I said as I hugged her, hoping that my hug can numb the pain she felt, reliving the past.

Train to Pakistan- By Khushwant Singh

What makes a modern smartphone smart is its ability to connect to the internet and its functions like video playback, music, cameras, and gaming. The Candybar touchscreen form factor of smartphones has been in existence since 2006 or so, the... END_OF_DOCUMENT_TOKEN_TO_BE_REPLACED

It was New Year’s Eve of 2019 and another seemingly ordinary year for me was coming to an end with a breathtaking view. The sun was presiding over the majestic hills of Nuwara Eliya, giving the stratus clouds a candy-like... END_OF_DOCUMENT_TOKEN_TO_BE_REPLACED

There's no denying that the pandemic has taken a toll on our physical and mental health, as well as general productivity. This is especially true in the case of teenagers and young adults. According to a survey organized by UNICEF... END_OF_DOCUMENT_TOKEN_TO_BE_REPLACED

Our fates intertwined through wedlock, Married life with a soldier, no cakewalk. Adorning the hats of both a mother and a father, Remember, we have now and always got each other.   Tales of your valour, the kids’ beloved story,... END_OF_DOCUMENT_TOKEN_TO_BE_REPLACED

From the beginning of everything, all I wished for, Was to be anything other than a phenomenon. All I wanted was to be alive and be missed, But I only have one path now, I march on.   Constant and... END_OF_DOCUMENT_TOKEN_TO_BE_REPLACED