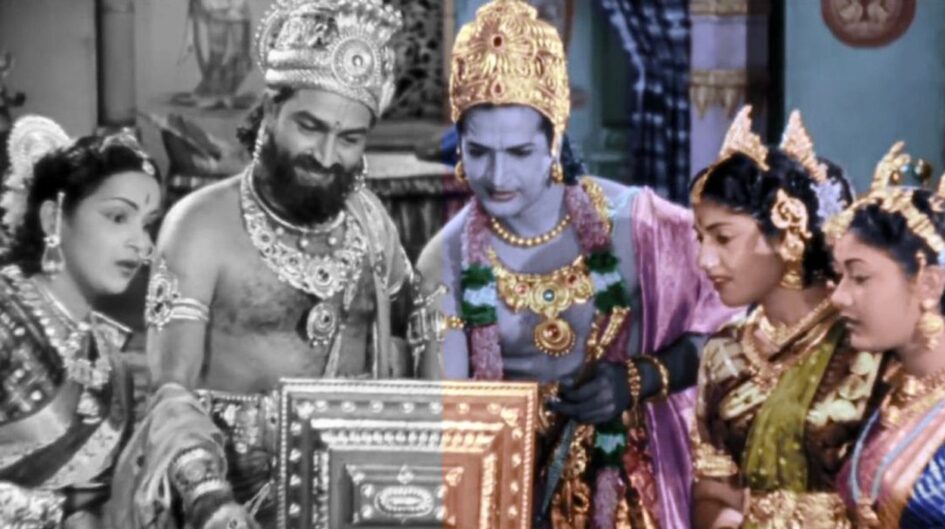 The lockdown, for most of you, was the most boring time of my life. Six months of staying at home didn’t do me any good apart from the fact that it brought me and my dad closer by giving us enough time to watch at least one movie a day.

However, we only watched black and white movies for two weeks because he wanted to show me how those movies were so much better than the ones made now. He made me watch Devadasu, Gundammakatha, Mughal-E-Azam, Naya Daur, Pardes, and many great movies but one movie that I very vividly remember watching was Mayabazar.

The first time I watched Mayabazar was as a kid and even though there wasn’t much that I had understood, I remember being awestruck. As an eighteen-year-old along with being flabbergasted, I now understood how different it was from all the other movies made during that time, Mayabazar felt like it was from the future. It was two hours and fifty-eight minutes of romance, poetry, and pure magic.

Mayabazar is based on a dreamy love story from the Mahabharata. It was set in a world of magic where anything is possible, after all, it showed us that video calling was a thing at least four decades before it was made possible. I now realised why the director K.V.Reddy and the cinematographer Marcus Bartley were highly acclaimed for making this possible even when there was a lack of electronic equipment and software. This movie is also really interesting because I could connect with the characters that were so well written. It is a mixture of exceptional storytelling, stunning film-making, and melodious songs that I was humming for a week after watching the movie.

Watching Mayabazar got me intrigued. How is a black-and-white movie made? Is it any different from how today’s movies are shot? Do they use a different camera?

The more articles I read about this, the more I realized that it was more work than any of us can imagine. Unlike a digital camera, a black and white camera only perceives the bright and dark spots in an image. It captures the dark spots as black and the bright spots as white, and all the other colors are captured in a shade of grey based on their brightness. These images are shot using reels or photography films, which are then made into actual prints by being captured in perfect lighting by yet another camera.

Though Mayabazar was indeed a magnificent film, it was still shot in black and white much ahead of its time. As the era of color films was indomitably prevailing so was the era of black and white films dwindling. Many movie lovers feared that a lot of great films would be forgotten by the younger generation due to the “color barrier”. But in 2004, the blockbuster- ‘Mughal-e-Azam’ was re-released in color marking a milestone in the history of Indian cinema.

Then in 2007, Gold Stone Technologies Limited bought the reel rights to Mayabazar and decided to transform this black and white movie into a colored one. It was going to be the first Telugu movie to ever be colorized. Mughal-E-Azam and Naya Daur had already been colorized by then and everyone was excited to see whether Mayabazar would look as good as they did. And sure, it did!

Well, my question was, “How difficult is coloring a full-length movie”? What does it mean to color a movie?

Colourization is the process through which color is added to a black and white or sepia photograph. It began as a hand-drawn technique but has been developed into a digital technique with technological advancement. Mayabazar was five thousand eight hundred eighty meters of the black and white reel that needed to be colorized, which was more work than it sounds. In today’s time, professional photographers spend about twenty minutes editing one picture to perfection, this should paint a clear picture of how much time and research would’ve gone into colorizing a movie made in 1957. Information about every small detail in the shot was needed to make it look lifelike. Information about the material, texture, and color of all the props, sets, and costumes used originally was needed. And when it came to the actors, their complexion, pupil color, hair, and the type of makeup used for each scene were needed.

But this information wasn’t easily available. Not a lot of thought went into all these specifics when a movie was shot in black and white because even if the sky in the background was red, it would be perceived as either black or white. This however made the job of the technicians colorizing the movie a lot more difficult than it already was. The process of colorizing is done by adding color to the twenty-four frames in one scene individually and repeating the same process carefully for every scene of the movie. Lack of the information that they needed meant that they had to use the hit and trial method to check which color went where, increasing work for themselves. It took about sixteen million colors to finish the colorizing of Mayabazar and every color frame was extremely close to reality.

Apart from all this, work also went into perfecting the sound of the film. The sound of Mayabazar was recorded in a live orchestra and was monaural. The dialogue and BGM had to be boosted with new recordings and mixing that made the sound modern yet glued to its original roots. The sound was converted into DTS by a team of a hundred and sixty-five professionals for 8 months.

After three years of hard work, Mayabazar was no longer the 35mm black and white film with monaural audio. On 30th January 2010, the colorized version was released in theatres, and it packed full houses.

Both the black & white and the colored versions of Mayabazar look equally beautiful and real on-screen and an absolute treat to the eyes. It was a movie that was way ahead of all the other movies made during its time. Both, in terms of film-making and technology. It was a major landmark in Telugu cinema, and I don’t think it is wrong to call it the greatest film ever. As much as I hate to agree with my dad, Mayabazar made sure that I realized that the old movies were everything but inferior to the movies made today.

~ Inspired by the movie “Mayabazar”

The scene opens in a jury room, where a decision is to be taken on the death sentence of a man accused of murder. After voting, each juror explains why they feel the accused is guilty or not guilty. One... END_OF_DOCUMENT_TOKEN_TO_BE_REPLACED

Many of us might look back at the time we spent in school with nostalgia and fond memories. But most will also agree that it wasn't the happiest of places with long and monitored study hours, heavy bags full of... END_OF_DOCUMENT_TOKEN_TO_BE_REPLACED

The lockdown, for most of you, was the most boring time of my life. Six months of staying at home didn't do me any good apart from the fact that it brought me and my dad closer by giving us... END_OF_DOCUMENT_TOKEN_TO_BE_REPLACED

Faith has always been considered as one of the most inherently pure and pious things, across any and every religion and every school of a belief system based on the concept of God. That is probably because every single one... END_OF_DOCUMENT_TOKEN_TO_BE_REPLACED