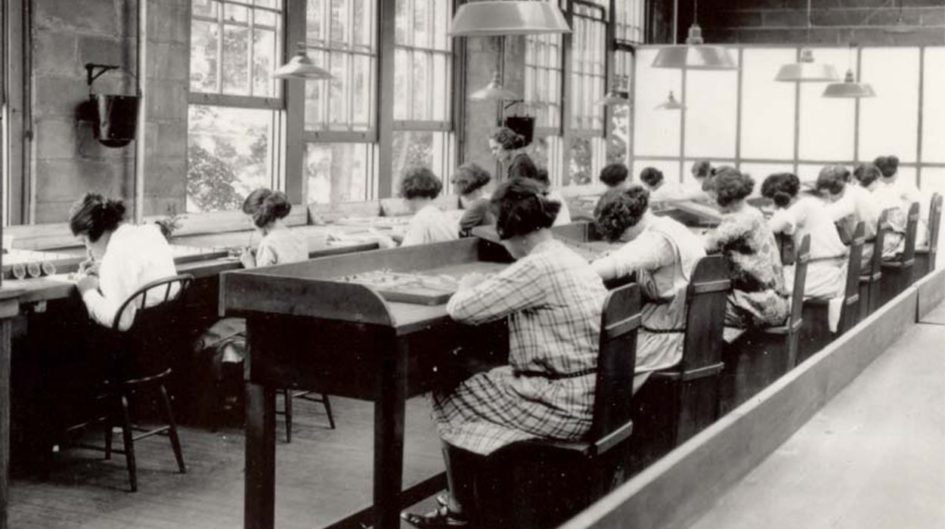 Grace Fryer was 18 years old when she first heard these words – eager, ambitious and ready to take on the world. She was employed as a dial painter with Radium Luminous Materials Corporation.

Six years later, her legs began to ache, her teeth decayed and she started to limp. It dawned on her that the words she followed so religiously- lip, dip, and paint- were the cause of her degradation.

In 1917, America officially entered World War I. With men drafted to the war, the country saw a lot of women taking up jobs to support their families. One of these jobs was dial painting with radium.

Radium was discovered in 1898 and was glorified like the elixir of life. Soon, radium spas, radium tonic, and even radium makeup found their way into the market.

The United States Radium Corporation (originally RLMC) employed young girls to paint dials of watches with luminous paint that contained Radium. The girls painted numbers on dials, which were sometimes as thin as 1mm in width. In order to paint the numbers fine, the girls were asked to lick the tips of the brushes. While some workers claimed to have liked the taste of radium and some couldn’t stand it, Grace Fryer later said that she felt the paint to be tasteless.

For a while, all was well. The girls had decent-paying, highly coveted jobs. They were oblivious to all the effects of radium.

During the day, they spent all the time painting with this ‘liquid sunshine’. At night, their hair, dresses, faces all glowed in the dark. They were the cynosure of all eyes.

The radium that settled on their body inside the factories, accompanied them outside.

After some time, some girls began to get backaches and leg aches. The doctors wondered if they were suffering from early-onset rheumatism. This did not deter the girls. They kept limping between the factory aisles, painting the dials to perfection. Bad turned to worse for Grace Fryer. She was unable to move without support and was compelled to wear a back brace and quit her job.

Her colleague, Mollie Maggia first visited Dr. Knef regarding toothache. As he was examining her, the tooth fell off. Next month, the same happened to another tooth. Ulcers appeared inside her mouth, at the place her teeth once used to be. Soon, her mouth became a site for abscesses. Pus would flow out of her mouth and began to give off a sour odour. When she visited Dr. Knef again for a painful jaw, he discovered he could pick pieces of her jaw out of her mouth. Merely by the touch of his hand. By then, her mouth was nothing but a cavity and her jaw was reduced to a stump.

Unable to pinpoint the cause of this problem, doctors attributed their symptoms to various reasons. During this time, the girls began to gain substantial publicity. Perhaps for the first time, the company felt a desperate need to protect themselves. Under pressure from factory owners to taint the girls’ reputation and save their face, Mollie Maggia (among others) was declared dead due to syphilis.

For over two years, the USRC refused to take any responsibility and even denied the existence of radium poisoning. However, in 1925, the girls’ claims were validated when a senior doctor named Harrison Martland devised a test that confined the presence of radium in their bodies, and that it was the root of their problems.

Armed with this knowledge, five of the girls- Grace Fryer, Katherine Schaub, Quinta McDonald, Albina Larice and Edna Hussman- decided to file a lawsuit against the company.

In May 1927, a young lawyer named Raymond Berry decided to fight their case.

After a long fight, Berry was approached by the judge to settle the case out of court. Though he initially dismissed this suggestion, the condition of the girls caused him to consider otherwise. He realized that by the time a verdict would be given, it would be too late to save the girls.

Katherine Schaub was suffering so much, she said: “I do not wish to live another month”. This spurred him and the girls to take a lump sum of $10,000, and the USRC began to do damage control.

Elsewhere in Ottawa, Catherine Donohue had just been fired after nine years of service when she began to limp. In the aftermath of the case of the New Jersey girls, the public started to become apprehensive of the radium dial factory. The company felt Donohue’s limp would scare the other workers.

When she filed a lawsuit, the country was in the clutches of the Great Depression. Donohue was so weak, she was unable to attend the court. She testified at her bedside, against her doctor’s orders.

In doing so, she had achieved justice for hundreds of dial painters who had died in circumstances of pain, humiliation, and injustice.

The case of the radium painters is probably the first of its kind- where a company was forced to assume responsibility for occupational health hazards associated with them.

Although the girls gave up their life in this crusade, the radium inside them is still alive. Radium has a half-life of 1600 years. It will continue to torment them, even after death.

Reserve the quietest reading nook in your house people because the KMIT book club is in town. We've got classics like Hitchhiker's Guide To The Galaxy for the science fiction afficionados out there. To Kill A Mockingbird for the social... END_OF_DOCUMENT_TOKEN_TO_BE_REPLACED

The ‘festival of lights’ spiritually signifying light over darkness, knowledge over ignorance, good over evil, and hope over despair. Diwali is one of the favourite festivals celebrated in the country. It is a full- 5 day package of cleaning, renovating... END_OF_DOCUMENT_TOKEN_TO_BE_REPLACED

Keshav Memorial Institute of technology what we fondly call KMIT, in all its glory is loved by all of us. No matter how unsure you are of it in the beginning, it will show you reasons why you were wrong.... END_OF_DOCUMENT_TOKEN_TO_BE_REPLACED

The Bronte sisters were the first of all female writers paving their own path... Virginia Woolf has aptly captured in her essay " A room of one's own" that the mindset of men and women are completely different and that we... END_OF_DOCUMENT_TOKEN_TO_BE_REPLACED