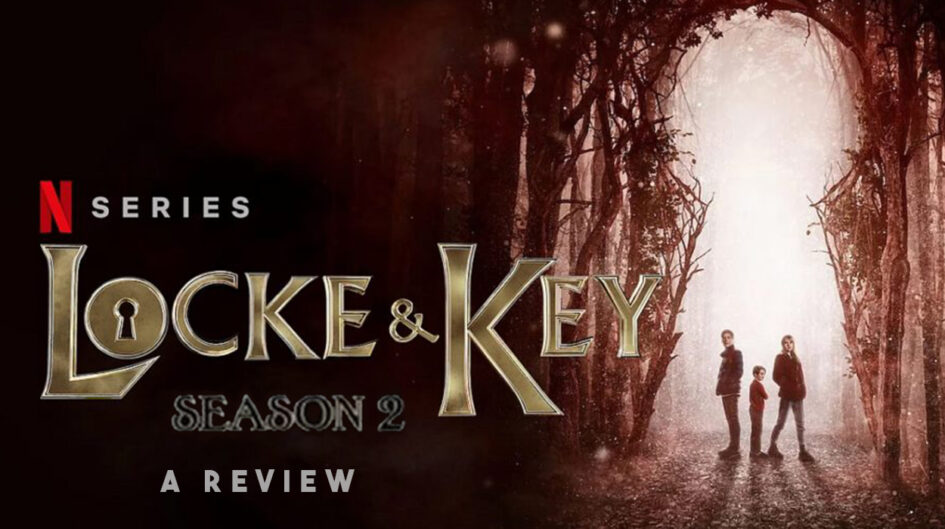 Disclaimer: This is a review of the Second season of Locke & Key, which premiered on Netflix on October 22, 2021. Although there are no major reveals of season 2, this article may contain a few spoilers from Season 1,

Locke & Key is a trending supernatural teen drama streaming on Netflix developed by Carlton Cuse, Aron Eli, and Meredith Averill. It is a live-action adaptation of the comic book series by Joe Hill and Gabriel Rodriguez.

It grabbed the attention of a large audience in its first season. Since the plot of this series is designed with the right amount of suspense and drama, one cannot resist binge-watching the whole show.

The story follows the Locke family after the murder of Rendell Locke. Nina, wife of Rendell Locke, with her three children, Tyler, Kinsey, and Bode, decides to move back to their ancestral home, the Keyhouse. It is a huge mansion full of hidden magical keys all over the place. Each Key holds strange supernatural powers. The Locke siblings discover different keys and explore their magical powers.

But, where there is magic, evil follows. The Locke siblings soon become aware of Dodge, the Demon, who is also searching and collecting the keys for a malicious purpose. And now they must defeat her.

Dodge (Laysla De Oliveira) carried the show’s horror in the first season with her beautiful yet intimidating appearance. Her every encounter with the Locke siblings takes the audience by surprise and horror.

The first season seems to have covered most of the main parts in the comic. However, its ending left the audience with many unanswered questions. After more than one and a half years, the wait is finally over with the release of season 2. Even though there weren’t many new additions to the original plot, the second season tied up some loose ends of season 1.

The story of the second season resumes three months after the end of season 1. The Locke siblings finally start living a regular teenage life, as they believe they are out of danger, without knowing that Dodge is still alive and well in the form of Gabe. This season covered more teen drama than in the first season. The start of the season was more playful and fictional than dark and horror, which did not last long.

In this show, adults cannot recall memories related to magic. So, Tyler and Kinsey try to find a way to remember magic even after they turn 18. While everyone is busy dealing with their problems, Gabe (demon incarnate) is making steady progress in his ominous plans with his new partner Eden.

This season revealed the origin and the history of Keys and their magic. It did not have as many scary and dark parts in this season compared to the first season. It seemed the whole season had been rushed. Thus, Locke and Key Imageskipping many scenes of the series that would have made the show more interesting. They gave direct answers to the questions raised in the first season instead of figuring them out throughout the show.

They could have put effort into introducing more keys and exploring their deep, dark secrets. Also, [SPOILER ALERT] the portal to the demon world, the Omega Gate, has been left untouched except for the last two episodes.

The plot for the second season is a bit similar to the first, which is the Demons chasing the Lockes, and they trying to defeat the former. Gabe, the main antagonist of the season, failed to plant the horror, and that scary impression, which Dodge delivered excellently in the first season. The show seemed a little bland as his character is more conniving and selfish than scary and intimidating. It’s hard to determine whether the fault lies with the actor or with the direction. But on the contrary, his partner Eden did an incredible job in sowing fear in the audience.

Even though a few aspects of the show were disappointing, the cinematography succeeded in making the audience keep their eyes on the screen. The series is a bit predictable, but still, it has managed to draw the viewers’ attention by ending every episode on a cliffhanger.

Netflix confirmed the renewal for its third season already. And hopefully, this time, we can see new possibilities of storytelling. Moreover, an even better narrative arc instead of the same old plot.

Did your 8-year-old self ever wish for that awesome Pixar movie that you watched, and you watched, then you watched again, to be real? Because I did!  I had a dream. I wished I was a car so that I... END_OF_DOCUMENT_TOKEN_TO_BE_REPLACED

Faith has always been considered as one of the most inherently pure and pious things, across any and every religion and every school of a belief system based on the concept of God. That is probably because every single one... END_OF_DOCUMENT_TOKEN_TO_BE_REPLACED

Two things have always fascinated me as a child- words and crosswords. Which word should I say? How do I say it? Can it, in its barely ten letters, hardly three syllables, carry the whole meaning of what I want... END_OF_DOCUMENT_TOKEN_TO_BE_REPLACED

“Hand me the gun and don’t move a muscle”, an injured Shankar Narayan whispers to his son, while they take cover under an old Contessa. The little boy does exactly as his father says, his hands trembling, desperately trying to... END_OF_DOCUMENT_TOKEN_TO_BE_REPLACED