Any undergrad pursuing Engineering has to know some powerful programming languages languages like C# and Java, faster languages like C, or at least about the fact that they exist. But one more powerful language has joined the list of late. Though the regular syllabus of either JNTU or OU doesn’t include this language, it has become one of the most user friendly, in-demand language of present time. Its “Python”. Here are some facts and benefits of Python.

“Python has been an important part of Google since the beginning, and remains so as the system grows and evolves” – Peter Norvig, Search Quality Director at Google, Inc.

“Python is fast enough for our site and allows us to produce maintainable features in record times, with a minimum of developers.” –  Cuong Do, Software Architect, YouTube.com 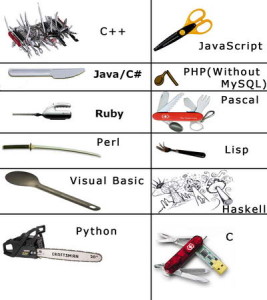 All in all, Python serves the beginners a great deal of knowledge in terms of understanding the functioning and purpose of a programming language. It is free and an open source software with a large community-based development model. So let us “Python” right away !

[Trigger Warning] The following reading contains potentially distressing information about murders, violence, and brutality in relation to Nazi practices. Reader discretion is advised.   Have you heard of me? Of course, you haven’t. I am neither a Jew who survived... END_OF_DOCUMENT_TOKEN_TO_BE_REPLACED

"Why does Caesar get to stomp around like a giant while the rest of us try not to get smushed under his big feet? What's so great about Caesar, huh? Brutus is just as cute as Caesar. Brutus is just... END_OF_DOCUMENT_TOKEN_TO_BE_REPLACED

Trigger Warning: The following article contains a portrayal of characters suffering from severe mental illness. Readers' discretion is advised.   Jane was driving her away from the glimmer of light towards the darkness, creeping deeper and deeper, until she was... END_OF_DOCUMENT_TOKEN_TO_BE_REPLACED

Afternoon, 27th September 2080 The season of fall had begun. The leaves had turned orange and were bidding goodbye to the trees which held them close to their hearts, to become one with the gentle breeze. Their journey now had... END_OF_DOCUMENT_TOKEN_TO_BE_REPLACED

"Animation is not the art of drawings that move but the art of movements that are drawn” ~Norman Mclaren. Some things in life don’t change, like the craze we have for animation. Right from adoring our childhood shows to never... END_OF_DOCUMENT_TOKEN_TO_BE_REPLACED