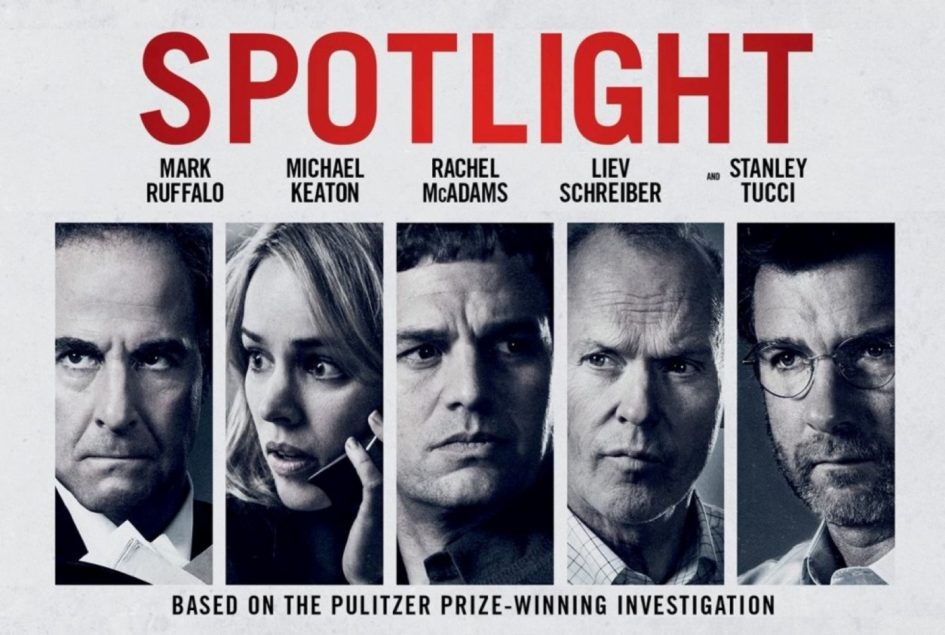 Based on real events, this movie chronicles the impressive efforts of the real Spotlight team led by Marty Baron, the then newly hired editor of Boston Globe, that adages the saying, “Sometimes it takes an outsider, someone with fresh eyes to see the truth.“
The movie is refreshing in that, even in its slight dramatisation of real events, it never deviates from the spirit of authenticity and refuses to fall trap to the notion of adorning itself with unnecessary fiction of romance or exaggerated emotion. It stays focused on the story and is hard-hitting in its subtlety.
In the way that it plays out, the movie simulates the mechanism of how cracks develop: a single weak link, when exposed, advances inwards to further expose contiguous weak links — revealing a clear crack leading to its origin.
On his first day, the newly hired editor, Marty Baron, redirects the efforts of the team of “Spotlight”, an investigative team of four reporters, to investigate the Geoghan case which strikes him as “essential” to the paper’s readers. The Geoghan case seems straightforward: a degenerate priest alleged to have molested over 80 children. But as the team peruses the seemingly ludicrous claims of the eccentric lawyer representing the victims, a Mitchell Garabedian, on Cardinal Law’s knowledge and subsequent cover-up of the crimes of his fellow cleric, a gut-wrenching reality sinks in. The movie follows the work of “Spotlight” which leads them to unfold the disconcerting reality of sexual abuse of young parishioners by priests and deliberate attempts made by Cardinal Law to suppress what was clearly an endemic problem of pedophilia among clergymen. The team’s pursuit to unravel the truth leads them to discover that the problem was bigger than a “few bad apples”; the problem was systemic. Under the astute leadership of Marty Baron, the team resists writing a premature story and works to piece the scattered cases of molestation charges against other priests — a staggering 90 or so in Boston itself — teaching a wise lesson on responsible journalism and its positive impact.

In one of the many hard-hitting moments, the movie challenges the usage of sanitized language. After all, the word “rape” in its four-lettered existence cannot shoulder the burden of an experience which destructs with the tear of an earthquake and leaves aftershocks far beyond. In another such moment, when the team calls Phil — a member of a victims organisation and survivor himself — to speak, he narrates how the abuse is not just physical but spiritual as it robs the child of their faith. The movie cautiously but powerfully distinguishes between religious faith and religious institutions, skilfully depicting a failure in the latter causing an inevitable and painful crack in the former. While the movie is praised for not “lionizing the reporters”, it bothered me that a conscientious and battered lawyer such as Garabedian, who bears the brunt of reality on behalf of a society that seems unready for it, was mostly ignored.

All said and done, to me, this movie hits harder home. The exploitation of children and women by self-proclaimed religious demigods is not an alien concept in a country with the likes of Asaram Bapu. To me, this movie seeks to reclaim hope and a need for responsible, and thus impactful, journalism — in a time when both seem foreign.
“Spotlight” won Best Picture & Best Original Screenplay at the Academy Awards and deservedly so.
Share this on:

[Trigger Warning] The following reading contains potentially distressing information about self-harm. The reader is advised to use their discretion to continue reading.   Darkness cocooned her room, her heart twisted, churned, her fingers closed around her throat, nails digging into... END_OF_DOCUMENT_TOKEN_TO_BE_REPLACED

Flash, Flash, Flash. Various screens show the face of the actor. A woman crying in the corner while another loves the visual of her crying. The editor looks at all of these different shots and lets out a satisfied... END_OF_DOCUMENT_TOKEN_TO_BE_REPLACED

Well, well, well. Something interesting has finally caught your attention in this painfully boring and monotonous life. You dash to the most convenient online marketplace to find the materialistic item that fuels your dopamine rush. These platforms help connect buyers... END_OF_DOCUMENT_TOKEN_TO_BE_REPLACED

[Trigger Warning] The following reading contains events of death. **This is entirely a work of fiction and no distress was intended for any family/person affected by a natural disaster. “Please Ma!” Arya pleaded. “I made it to my final semester.... END_OF_DOCUMENT_TOKEN_TO_BE_REPLACED

“How long are you planning to cry and sleep in here?” I asked her, as I raised the blinds in her dark bedroom. Seeing the chocolate wrappers and empty Ramen cups spread across the room, I couldn't help but sigh.... END_OF_DOCUMENT_TOKEN_TO_BE_REPLACED