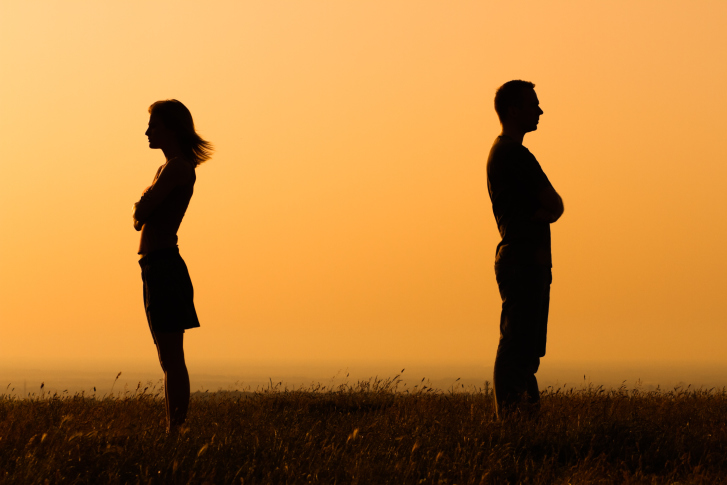 “If you loved me, why did you run?” asked Charlie in a wheezy voice.

Martha stayed silent for a few minutes before speaking up.

“If you loved me, why did you stray?”

It was Charlie’s turn to remain silent. “A question for a question is not an answer, Martha.”

“Fine! I ran because I was scared, Charlie. Scared of what you were doing. Of what you had become.”

“I would have protected you Martha. You did not trust me enough.”

“Oh but I did, Charlie, I trusted you with all my heart.”

“Damn it Martha! Why did you run then?”

“What else could I have done? You were my truest love and my darkest fear. When you got into that drug business, I spent all my time wondering if you would come home each day. I told you to stop it all. But you didn’t listen. You never did. And I was scared our son would grow up to be the same. And that is why I ran. Now, can you tell me why you strayed? Was our marriage not enough?”

“What other answer can you give me apart from silence? Never you mind. I hope you will excuse me now Charlie. I have plans.”

“Don’t go Martha. We’ve met after so long. There are so many things I want to tell you.”

“Charlie, I left 20 years ago. And you never came asking after me. Why now? Why do you want to open those doors? I’ve made peace with all of it. Let it go.”

“I haven’t made peace with any of it.” Charlie said.

“Is that why you remarried Charlie? Because one marriage didn’t make any sense, but a second one would?”

“Martha, you don’t know how sorry I am.”

“What do you want with me Charlie?” Martha interrupted.

“I want you back. I want to fulfil all the promises I made to you. I want to give you that happy ending I promised.”

“Our happy ending died, a very long time ago. There’s nothing either of us can do about it. Not now, not ever. I have to go. Bye Charlie.”

“You are still that stubborn woman I met 30 years ago.”

“Unlike one of us, I didn’t change. Goodnight. Goodbye.”

“Wait, I got you something, for your birthday. I haven’t forgot you see?” and Charlie handed her a small box like package wrapped in colourful paper. “Please take it. Think of it as a goodbye present if you want. Do whatever you want with it. But please take it.”

Martha took the package and swiftly turned around and walked away, got into her car and started to drive. She didn’t know where she was headed. Her mind was too occupied with events that happened all those years ago.

It was at a party. Charlie and Martha were happier, married and together. Martha had always known about Charlie’s job. He was a criminal. She knew what she was getting into when they got married. Everything seemed to be fine, people were having fun at the party  until Charlie’s boss, Victor, called Charlie into his study and they were there for a while. Martha was starting to worry. She knew that there was a lot of tension within the gang since a month. There was a brief change of leadership which no one fully approved of.

Suddenly, gun shots were heard. Martha went running towards the study only to find Victor’s body on the floor and a gun in Charlie’s hand. Charlie had broken a promise that day. He had promised Martha that he would never kill. And yet, that night, he did. Martha was horrified.

The months that followed were filled with arguments, screaming, crying and smashing things. Martha tried telling Charlie that whatever he was doing was very wrong and it went against his very principles. He wouldn’t listen. He was too consumed by power to listen to her and continued to venture into darker areas of the criminal kingdom.

All this was affecting little Teddy who was almost always crying these days. He hated that his parents were always fighting. He was only three but he knew something bad was happening. Martha hated to see him cry. After every fight, Charlie would leave and she would give Teddy a cookie and give him all his toys to play with and she would go into the bedroom, fall face first onto the bed and cry into her pillow to muffle the sounds.

Days passed. Months did too. Charlie didn’t change. He only got worse. Martha was also slowly giving up hope. She was scared for her son as she kept hearing about more murders committed by her husband. She also found out about his girlfriend. He went to see her every alternate night. Martha decided to take matters into her own hands. This house she lived in was no longer a home. So one day, she packed a bag with clothes, her own and Teddy’s, all of Teddy’s toys and Charlie’s money. Lots of it. All her jewellery went into the bag too, except her ring. She left it on the dresser for Charlie to find it. She then sneaked out of the house and took a bus to the train station. She didn’t see where the train was headed. She just boarded it and switched two more before finally reached a town in the middle of nowhere and decided to make a life there.

She became a florist and sustained the job and her shop. Teddy grew older and left for college and to law school after that. He was now a lawyer, practicing law at some private firm in the big city. Martha was very proud of him. He would keep visiting her frequently until he got married and had kids. Her grandchildren were good kids but she’d wished them to be more sociable and not spend all time on those ridiculous palm sized electronic phones.

She wants to see them as often as possible but Teddy’s busy schedule did not permit it and she did not want to visit him. She didn’t want her son to think she was lonely.

Martha snapped back to the present and saw that she was slowly running out of gas and needed a refill. Luckily, she found a petrol pump, filled in the gas, bought herself a few packets of cigarettes, got in the car, looked at the gift Charlie gave her, looked away and drove again.

Her thoughts took her back to the day Martha and Charlie got married. It was a small, quiet affair. She wore her mother’s wedding gown, the only thing that belonged to her mother she had left. He wore a tailored suit. They both said their vows and he swore to protect her and never leave her side. She promised to stay by side no matter what.

Things were simple back then. A small home, filled with love and joy. Then, Teddy came into their lives, with his tiny hands and feet, giggles and chuckles. Martha loved every moment of it. She thought her life was perfect and nothing could ever shatter this. And then, things started to fall apart piece by piece.

Snapping back from her thoughts, Martha pulled over near a lake and decided she needed a smoke. The dark of the night was slowly breaking apart. Martha looked for her lighter but found Charlie’s gift instead. Hesitant at first, she opened it. Inside the box was a photo taken at their wedding and her wedding ring.

She quickly put it aside and continued looking for her lighter. Finally, she found it. She lit a cigarette, got out of her car, the photo and the ring in her hand and started to walk. She reached the lake and sat down there.

Somewhere on the other side of the city, Charlie, is at a bar, drinking himself to oblivion, saying the name of his ex-girlfriend over and over again. She was killed a few months ago and Charlie was very lonely. He needed someone else. Someone to fill the void she left. So he looked up Martha and tried to persuade her to take him back but in vain. He was scared of being alone. Now, he will have to find someone else to spend the rest of his life with.

At the pond, Martha is still sitting. She had smoked an entire pack of cigarettes. She watched the sun slowly rise. She held up the photo, smiled a little and lit it up with her lighter. A single tear streamed down her face as she watched it burn. She could have taken him back. But she didn’t want to.

Great birthday gift Charlie, she thought. Martha looked at the ring in the palm of her hand and kept looking at it. She tossed it into the lake and took a deep breath before walking away and whispered to herself, “Happy Birthday Martha.”

“Why do the Yankees always win? The other team can't stop looking at the pinstripes.” The famous quote by Frank William Abagnale Jr., one of the popular con-men specialized in impersonation and forgery, can definitely be taken as the basis... END_OF_DOCUMENT_TOKEN_TO_BE_REPLACED

"How do you feel about this achievement? Your book is now one of the fastest-selling books!" asked one of the reporters. "I'm happy for this book's success more than any of my other books. Because this book is not a... END_OF_DOCUMENT_TOKEN_TO_BE_REPLACED

In a world of change, the only thing constant is the effort to make a difference. While we all desire to be our finest selves, the path to being better is a rocky road. There are some days where we... END_OF_DOCUMENT_TOKEN_TO_BE_REPLACED

Trigger Warning: The following content contains a description of abuse and murder which is potentially disturbing. Readers’ discretion is advised.   Did you know that Adolf Hitler was alleged to have paranoid schizophrenia? Many Psychoanalysts pronounced that he had mental... END_OF_DOCUMENT_TOKEN_TO_BE_REPLACED

Disclaimer: The facts mentioned in this article may vary with the actual ones. "To conquer oneself is a greater victory than to conquer thousands in a battle." – Dalai Lama The second world war reached its final stage in 1945,... END_OF_DOCUMENT_TOKEN_TO_BE_REPLACED