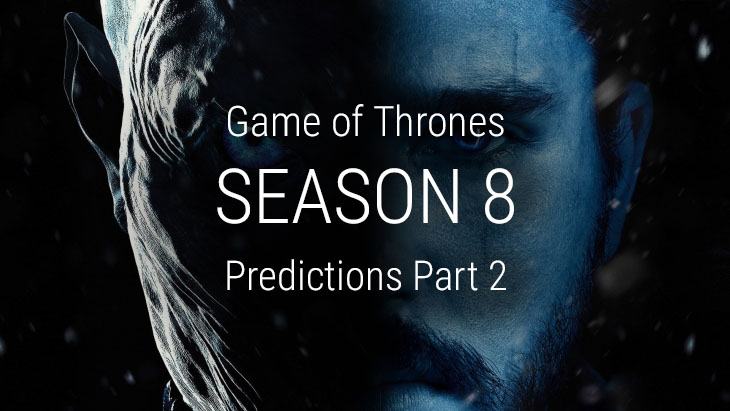 Prep for the great war:

After the first wave at Winterfell, people including Sansa, Bran, Arya, Brienne and the other women in Winterfell move to Eyrie for safety. Dany is pregnant and weak, Jon insists her to go to Eyrie. Drogon will join Dany and Rhaegal will remain with Jon. All the lords and their soldiers along with unsullied and Lannister forces prepare for the great battle with tranches, traps and all the battle-necessary arrangements. Guards observe the distance from their guard towers.

Much like the last episode of season 7, the White Walkers arrive first with fog followed by the Night King, as a homage to his dramatic entrance flying on Viserion. As soon as the guards notice the fog, they blow three horns and the much-anticipated battle begins. We might see some war strategies like creating a boundary of flames to limit the enemies, something as in the Battle of Bastards. With the never-ending attack of wights, the battleground succumbs to white mist. Jon gets his POV shot in this fight. It’s now we see him summon his dragon – Rhaegal, a parallel to Daenerys’ first mount on Drogon. Jon wastes no time in mounting Rhaegal and starts burning the undead to ashes. The dragons, like every new season, will be increased in size, except the undead dragon which would have got more rotten by then. Dragon vs Dragon, Jon vs Night King. This one-on-one duality would certainly be a feast for the eyes! The fight scenes among dragons are beyond one’s imagination! It is safe to assume that Rhaegal won’t die against Viserion as it is larger and more powerful. Although to bring more tension into the frame, we will see Rhaegal injured and in trouble. Just before things get worse, Daenerys flies in with her dragon and starts attacking the zombie dragon. Wait, how did the queen of dragons come here? Well, just after the war begins, Drogon senses that Rhaegal is in a fight. Daenerys sees this and goes on his back to check what’s happening at Winterfell. This is where a white walker in a nearby castle sees the dragon fly by. The White Walker immediately sets his army march towards Eyrie as Daenerys continues her way towards the battlefield. Drogon tears down the zombie dragon piece by piece and as she performs the showdown attack on Viserion, she takes a spear to her heart, thrown by the Night King. The zombie dragon falls down.

Since the beginning of the show, Daenerys has always been a rising character, from a slave-wife to mother of dragons and breaker of chains. A thematic payoff for her would be to set the stakes higher as she passes away. Dany getting killed has been foreshadowed many times in the last season when they talk about her possible child. But the living army is already in their fight, the war is ON. Can she really have a child at this point in time? Why is this baby needed for the plot? Just because when things go south, there is still hope with a lineage of Targaryens. So maybe she would’ve given birth to a child at Eyrie.

Anyways, Dany dies. Jon goes rogue like he always has. We may see both Jon and Night King on the ground, away from the battle. Jon charges at the head of the snake, the Night King. He uses the magic of White Walkers and gets Jon knocked out. Jon gets captured by the Night King. 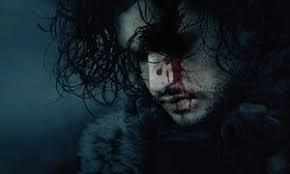 Game of Thrones is indeed a show about political drama. They can’t close the zombie case without having a tension among other characters. We will see this through Cersei and Euron. Euron is sailing back from Essos with thousands of Golden Company soldiers. Theon with his new crew attack ‘Silence’ – the ship of Euron – in silence. This stealth attack will cause Theon to confront Euron in a hand to hand battle where Theon would end up killing Euron and himself (which sets Yara free?). This fails Cersei to pay the debt to the Iron Bank, leading Tycho Nestoris (a representative of the Iron Bank) to hire an assassin from the faceless men. He says only one word – “Cersei”. Jaqen H’Ghar replies with a smirk, “A girl knows her name”. The news of losing Euron flips Cersei’s switch to aggression. She decides to invade Eyrie with the remaining men at King’s Landing. On the flip side, Arya prepares to leave Eyrie to King’s Landing.

The Night King doesn’t see Jon as any other human, but as if he could be a huge ally for the dead army. The Night King wants Jon to be a White Walker. How can a human turn into a walker? With dragon glass. So we will see Jon captured, but alive somewhere in a land of thick fog. Night King takes a dragon glass and pierces it into Jon’s heart. But what will happen is beyond his imagination. Jon opens his new blue eyes. He was already dead once, so he doesn’t die, but grows stronger. He doesn’t turn into a white walker but turns more like Benjen Stark, a mix of a human and white walker. Night King immediately steps backward. Jon starts attacking the Night King, but he seems too powerful to be defeated. 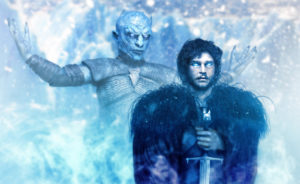 In a montage, Jon handles a fight with white walkers, Eyrie gets attacked by an army of wights, Arya enters King’s Landing. While Jon is losing, the mighty Drogon appears in the sky. While white walkers attack Eyrie, Jaime and the Lannister Army come from the background to defend the castle. Qyburn brings Cersei a glass of wine. With the fog clearing out, the dragon bursts its flames onto the ground, bursting the White Walkers into fragments. Most of the wights at Eyrie fall down. Qyburn explains Cersei that the men she sent were misled by Jaime to defend Eyrie. Cersei shocks, Arya removes her Qyburn mask as Cersei falls down spitting blood. “This is for Daenerys Targaryen.”, says Jon looking at the Night King, “Dracarys!”, the final blow to shut everything down, including himself. 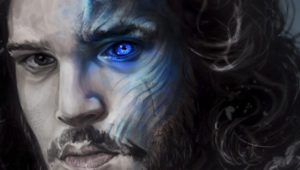 According to George RR Martin, the ending would be bittersweet. Is this the bittersweet ending? I have left out a bunch of characters like Tyrion, Bran, Melisandre and also a possible epilogue, I will leave that up to you, as this is all I could come up with. Convincing or Rubbish? Rate the story in the comments.

[Trigger Warning] The following reading contains potentially distressing information about violence, brutality and sadistic practices. The reader is advised to use their discretion to continue reading. “For the last time, you don’t have to do this. They will finish the... END_OF_DOCUMENT_TOKEN_TO_BE_REPLACED

Comfort space is personal to every individual. It allows you to be yourself and cherish the moments as they are with no judgment whatsoever. As for me, movies and music do the job. Speaking about movies, I have been exposed... END_OF_DOCUMENT_TOKEN_TO_BE_REPLACED

Aren't all of us artists trying to express ourselves in this world? In my opinion, art is a form of expressing an emotion. Learning how to express our subconscious emotions and communicate with them will take time but what is... END_OF_DOCUMENT_TOKEN_TO_BE_REPLACED

“THE SWAT TEAM BURST IN. THERE WAS CURTIS GREEN COVERED IN COCAINE AND FLANKED BY TWO CHIHUAHUAS” ~The Untold Story of Silk Road by WIRED In early 2011, law enforcement agencies were caught with their pants down when drugs began... END_OF_DOCUMENT_TOKEN_TO_BE_REPLACED

[Trigger Warning] The following reading contains events of death. **This is entirely a work of fiction and no distress was intended for any family/person affected by a natural disaster. “Please Ma!” Arya pleaded. “I made it to my final semester.... END_OF_DOCUMENT_TOKEN_TO_BE_REPLACED