A Dazzlingly Lit Up KMIT 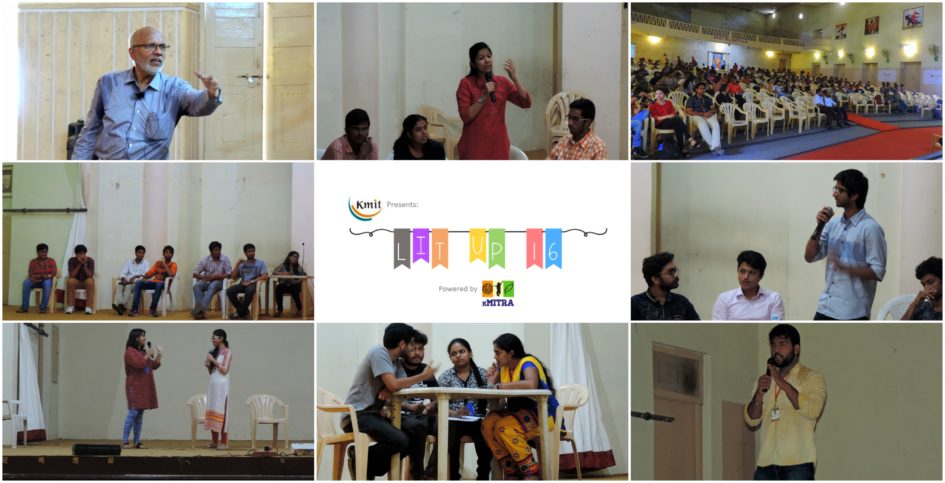 A Dazzlingly Lit Up KMIT

On the 1st of October, 2016, KMIT celebrated its first-ever literary fest, Lit Up 2016. This is one proud moment for kMITRA as it was the team that has worked towards making it a success, with the obvious help of the management.

Seven events were arranged and carried out according to a perfectly well thought out plan. The events were Quiz, JAM, Image Interpretation, Product Launch, Debate, Dialogue Delivery and Stand up Comedy.

After evaluating what seemed like a never ending bundle of papers, six worthy teams were selected. The final round was to be held on the 1st of October, at 2:00PM in the auditorium.  The competition was presided over by the quiz master, Professor Narendranath Menon, from the Osmania University.

The competition was a hearty affair, the audience as enthusiastic as the participants. After five rounds of quizzing, the winners were declared and were awarded cash prizes. 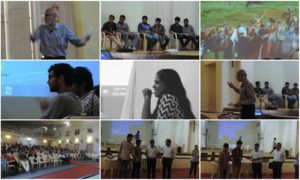 Another event held in parallel with the quiz was JAM (Just A Minute). The participants were shown a list of categories from which they had to choose one. Each category had a set of pictures labelled with numbers. The participants were provided the option of picking the number themselves, and whatever image came up with that number, the participants were supposed to speak about it for one minute. The categories were animals, food, holidays and festivals of the world, landmarks, people, sports, technology and random. Each category had up to 15 images. This was one of the events that started on time and finished in time. 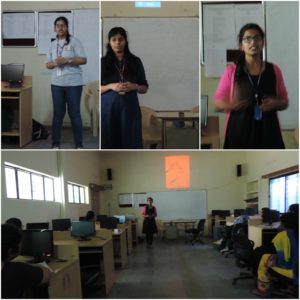 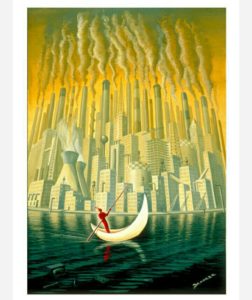 Another very interesting competition, product launch is a team event in which each team has to create a fictional product, champion it with the help of a presentation. Each team had three members and were given five to seven minutes to put forth their product. It was an entertaining time for both the participants and the judges as there was creativity overflowing at every corner. The judges had a tough time deciding the winners as each team had a very unique product to present but in the end, they somehow managed to give us three winners.

Who doesn’t love a good argument? The debate competition was a huge hit with the audience. Firstly, we had to hold a qualifier as there were twenty four registrations for debate, which was very enthusiastic. Each team was eager to make it to the final and this fact was clearly evident in the arguments they put forth. Finally, four teams were selected and were given three topics for the final. The selected teams had to prepare for all the three. The topics were

To be honest, the debate was a very heated affair. Arguments thrown back and forth across the teams, calling one another out on the factual discrepancies, oh, it was a joy to behold! 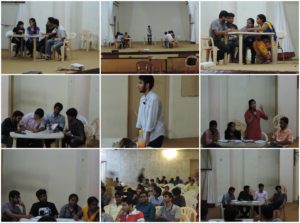 This was a team event and each team was given a theme and a minute to prepare for it before presenting their dialogue. At the end of the dialogue, the judge will open the chit with the theme on it and then decide whether or not the dialogue was relevant.

Everybody can laugh. But not everybody can make people laugh. The stand up comedy competition was theme based, and the theme was one of the best ones ever- Indian Soap Operas. The audience had good laughs and then, Lit Up came to an end. The only thing remaining was the prize distribution. So, here are the winners!

As I take a stroll in the graveyard observing my funeral, I find a few crying and the other meticulously bored by the doings. Yet it feels so light, death actually took away the pain of my congenital disease. But... END_OF_DOCUMENT_TOKEN_TO_BE_REPLACED

Trigger Warning: The following content contains a description of abuse and murder which is potentially disturbing. Readers’ discretion is advised.   Did you know that Adolf Hitler was alleged to have paranoid schizophrenia? Many Psychoanalysts pronounced that he had mental... END_OF_DOCUMENT_TOKEN_TO_BE_REPLACED

To most, the color purple is just like another color and holds no special significance, other than to be one's favorite color. It is a simple color resulting in a beautiful blend of red and blue colors. But in reality,... END_OF_DOCUMENT_TOKEN_TO_BE_REPLACED

"How do you feel about this achievement? Your book is now one of the fastest-selling books!" asked one of the reporters. "I'm happy for this book's success more than any of my other books. Because this book is not a... END_OF_DOCUMENT_TOKEN_TO_BE_REPLACED

"Animation is not the art of drawings that move but the art of movements that are drawn” ~Norman Mclaren. Some things in life don’t change, like the craze we have for animation. Right from adoring our childhood shows to never... END_OF_DOCUMENT_TOKEN_TO_BE_REPLACED