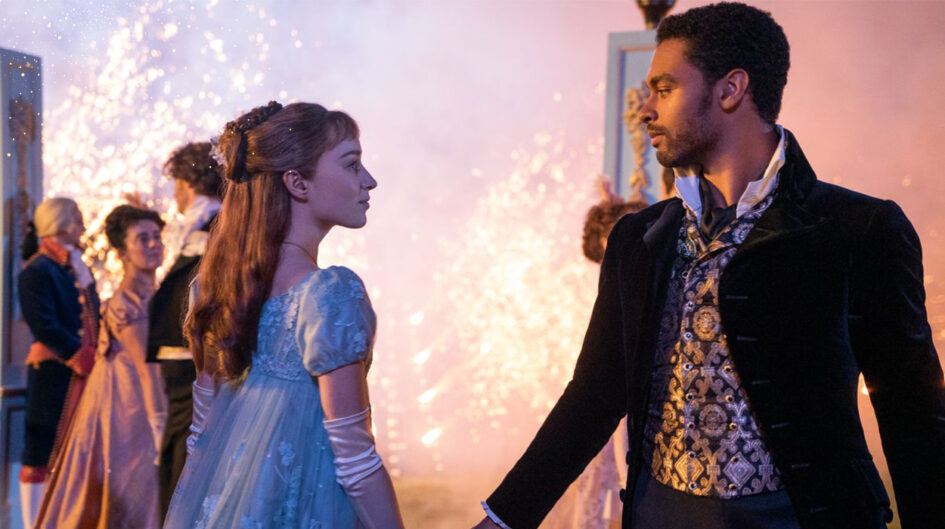 “Dear reader, if there is a scandal, I shall uncover it.”

Welcome to Regency London, where debutantes attend balls every second day, a mysterious gossip column wreaks havoc across London, and Ambitious Mamas shove their children down the aisle with alacrity. Bridgerton promises all of that, and then some more.

Adapted from Julia Quinn’s historical romance novel ‘The Duke and I,‘ Netflix’s Bridgerton is a period drama about one Daphne Bridgerton’s quest to get married. The show is created by Chris Van Dusen and produced by Shonda Rhimes (both names synonymous with Grey’s Anatomy, Scandal, Private Practice, etc.) and premiered on December 25, 2020, on Netflix.

It is 1813, and houses across London are readying themselves for the upcoming social season. Akin to a rocket, Daphne (Phoebe Dynevor), the eldest Bridgerton daughter is prepared, instructed, and launched into the marriage market. She crashes into wickedly handsome Simon Basset, Duke of Hastings (Regé-Jean Page), and the two take an immediate dislike to each other. To Daphne’s chagrin, her brother Anthony, Viscount Bridgerton (Jonathan Bailey), deems her impressive bevy of admirers unworthy and takes it upon himself to find her a suitable husband. Handsome Simon (for we must not forget that he is) who is determined not to marry (‘men,’ we sigh) wishes to escape vulturous mothers eyeing him as their future son-in-law. The two strike a pact and pose like a couple to augment Daphne’s desirability and reinforce Simon’s unavailability. How convenient.

Will their plan succeed and help Daphne find true love? Who is the enigmatic Lady Whisteldown, unlocking the ton’s secrets? Do Daphne and Simon get caught up in their whirlwind of a plan, only to find themselves drawn to each other?

We all know the answer to that question, but the eight episodic series is worth the watch.

From the beginning, Bridgerton promises to be nothing more than an escapist paradise, helmed by a medieval love trope. The narrator Lady Whistledown (voiced by the incomparable Julie Andrews) provides chuckles in abundance. The cast is ably led by Dynevor, Page, Adjoa Andoh, and Ruth Gemmell, along with memorable and endearing performances from the remaining actors. Like any show with an ensemble cast, Bridgerton leaves you wanting more screen time for other characters.

The then Queen of England, Charlotte (portrayed by Guyanese-British actress Golda Rosheuvel) is of African descent, as are other lead characters. There have been various claims about Queen Charlotte’s possible African ancestry, but they are not corroborated. The show treats black people as first-class citizens in 1800 England and by way of explanation, we receive a ten-second dialogue. It is challenging to come to terms with whitewashing the British Empire considering the systemic racism prevalent even two centuries later, but the show chooses to move on.

The screenplay heavily borrows from the Bridgerton books. The dialogue occasionally sounds out of place and forced. Its saving grace is the charm of the actors that say it, which keeps your mind off the inaccuracy that sticks out like a sore thumb. Van Dusen took some cinematic liberties, most of which paid off. The dresses are more modern than society would allow but they dazzle and paint a pretty picture. Costume designer Ellen Mirojnick (How to Get Away With Murder, Still Star-Crossed) drenched most of the young women in pastels and the outfits look ravishing. The background score is bold and refreshing. Music supervisor Alexandra Pastavas (Gossip Girl, Grey’s Anatomy) risked string quartets playing some of the 21st century’s biggest pop music. It is strange to imagine, but an orchestral cover of Billie Eilish’s ‘bad guy‘ has a charm unto its own. The show was majorly filmed in London, Bath, and York. Every frame- house, street, ball, or park is enchanting and swoon-worthy.

The series appears self-aware and often verges on irony. It inevitably reminds you of Downton Abbey, except this version is racier, zanier, and has more sideburns. A TV show can address a social issue responsibly without compromising the plot or putting one to sleep, as displayed numerous times in Rhimes’ works. Despite the advantage of a runtime of about eight hours in total, Bridgerton chooses to take the easy route. For the most part, it throws light on several problems, but shrugs away responsibility, only to gloss over them.

Consider this- Daphne’s life is as sheltered as it gets and she has half-baked knowledge of contraception. Simon leads her to believe he is physically incapable of having children. This leads to an unfortunate sequence in which Daphne manipulates Simon in an attempt to have a child. Consent is never withdrawn in any form, but both parties took advantage of each other. Communication is paramount to any healthy relationship and its absence renders this scene disquieting to watch.

The most evident differences from the book are the characters’ identities. Our hero Daphne is in love with the idea of love- that’s as far as her personality lets her go. The show runs dangerously close to stereotyping its characters (wise matriarch, overprotective brother, rakish hero) but stops itself before turning caricaturish.

Like any sappy romance, Bridgerton is predictable and offers little in the way of suspense, barring the identity of Lady Whistledown. It needs a mild dose of ‘show, don’t tell’. The show is a not-so-subtle reminder that when all is said and done, looks are the only thing that matters. In other news, Page has accepted the title of Internet’s New Boyfriend with great aplomb.

If you want to drown yourself in mind-numbing hours of ballroom conversations, illegal duels, and cheesy romance, look no further. Bridgerton is delicious enough to make you click next episode.

Many of us might look back at the time we spent in school with nostalgia and fond memories. But most will also agree that it wasn't the happiest of places with long and monitored study hours, heavy bags full of... END_OF_DOCUMENT_TOKEN_TO_BE_REPLACED

The lockdown, for most of you, was the most boring time of my life. Six months of staying at home didn't do me any good apart from the fact that it brought me and my dad closer by giving us... END_OF_DOCUMENT_TOKEN_TO_BE_REPLACED

Faith has always been considered as one of the most inherently pure and pious things, across any and every religion and every school of a belief system based on the concept of God. That is probably because every single one... END_OF_DOCUMENT_TOKEN_TO_BE_REPLACED

Did your 8-year-old self ever wish for that awesome Pixar movie that you watched, and you watched, then you watched again, to be real? Because I did!  I had a dream. I wished I was a car so that I... END_OF_DOCUMENT_TOKEN_TO_BE_REPLACED