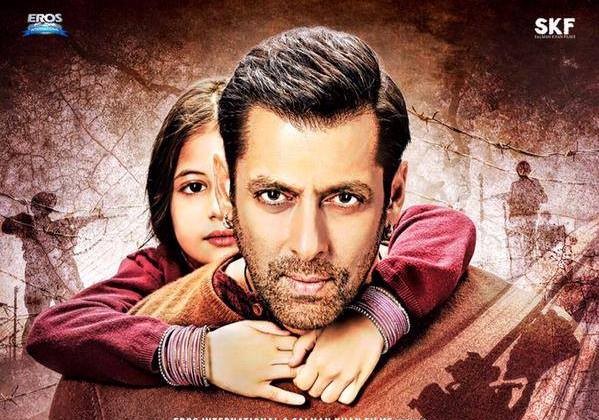 Bajrangi Bhaijan is what comes out when the script of “Dabang” or “Wanted” go to Haridwar and takes a dip in the holy river of Ganges.

What comes to your mind first when you think of a Salman Khan movie? Action? Some shirtless visuals accentuating Salman Khan’s brazen body? Preposterous dance moves subtly choreographed for a dance-challenged person? Philosophical dialogues delivered by a quirky policeman? Well, if you are expecting something along these lines, you are wrong. Though the title of the movie is misleading, the movie is more “Bajrangi” than “Bhaijaan”.

Bajrangi Bhaijan introduces to us, Bajrangi, a God-fearing man who lives by the law and is an ardent worshipper of Lord Hanuman. Bajrangi risks his own life, religion and principles on a journey to reunite a 7- year- old Pakistani citizen “Shahida” who gets separated from her mother while on a journey to a famous “Dargah” in India. Though the essence of the story revolves around the hackneyed Indo-Pak border tension, the orbiting story around this central nucleus is very different and one of a kind. It vacillates somewhere between PK and LOC Kargil and wins millions of hearts along its path. The story neither shows the facades of tempest nor seems mawkish to the audience. It is an adequately weaved storyline of action, love, religion and the whole motive of the story- a hovering white flag of peace between India and Pakistan.

Kudos to Kabir Khan for having cast a powerful duo of Salman Khan as “Bajrangi” and Harshali Malhotra as “Shahida” alias “Munni”. This 7- year- old tiny little kid speaks through her eyes, her apple pink cheeks and an endearing smile which enswathed her face throughout the movie.  Her screen presence is indomitable, her acting skills are terribly remarkable and her innocence is just breath-taking. Salman Khan- a versatile actor who can deliver a hit in any genre shakes under the prodigious performances of Harshali and Nawazuddin Siddiqui. Nawazuddin Siddiqui who plays the role of an “apparent” journalist, is an embodiment of theatrical skill and art. In short he literally lives the character.  Kareena Kapoor hardly has any role here but makes her presence felt and bolsters the power packed performance of the other three starlets quite adequately.

The surreal mountainous backdrop of Pakistani “Kashmir” radiates the message of peace and harmony as desired by the director of the movie. Kabir Khan sure has an art of capturing the essence of a story in pictures- an innate skill every cinematographer desires for.

A storyline so fresh enlivened by the flawless acting of the 7 year old Harshali Malhotra and the “hud hud Dabang” hero is a treat to the eyes literally, visually whatsoever. Commendable storyline scripted by the “The Master Storyteller” Vijayendra Prasad who can now boast of writing the story for record breaking movies like “Bahubali and Bajrangi Bhaijan.

“Hand me the gun and don’t move a muscle”, an injured Shankar Narayan whispers to his son, while they take cover under an old Contessa. The little boy does exactly as his father says, his hands trembling, desperately trying to... END_OF_DOCUMENT_TOKEN_TO_BE_REPLACED

Did your 8-year-old self ever wish for that awesome Pixar movie that you watched, and you watched, then you watched again, to be real? Because I did!  I had a dream. I wished I was a car so that I... END_OF_DOCUMENT_TOKEN_TO_BE_REPLACED

The lockdown, for most of you, was the most boring time of my life. Six months of staying at home didn't do me any good apart from the fact that it brought me and my dad closer by giving us... END_OF_DOCUMENT_TOKEN_TO_BE_REPLACED

As the night grew darker, enveloping an empty street with mystery and fear, it embraced two college students, Matteo and Ace. Drunk and floundering into the dark alley, they hadn't realised how far they had wandered until they came across... END_OF_DOCUMENT_TOKEN_TO_BE_REPLACED

“Propaganda” in present-day English, refers to information or media (especially of biased or misleading nature) that is used to manipulate the audience to further an agenda. If you hear the word propaganda, it immediately alerts you to look out for... END_OF_DOCUMENT_TOKEN_TO_BE_REPLACED