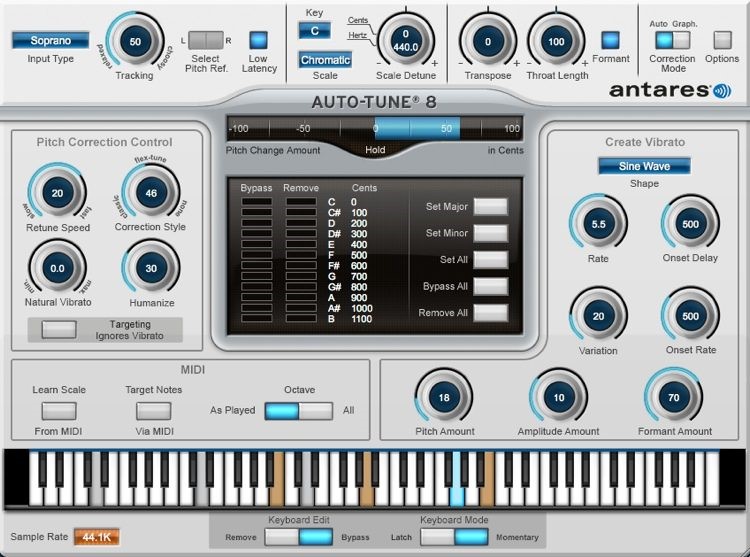 We’ve all seen Mr. Khan singing perfectly in tune and many of us are fans of the recent single of his. We’ve heard a lot of critics tell us that it’s autotuned. Ever wondered what exactly this is?

Autotune is a modulator which alters the notes and frequency of the human voice to the nearest perfect note sung. The autotune was first invented by the Antares Technologies in  1997. This was a midi invented to correct and alter small pitch corrections to the human voice and instruments which had small frequency errors in them. Now the question is, can everyone who wants to sing use this?

We all know what Adam’s apple is. It is a small projection in the human neck. A singer or precisely a person who can sing in tune is a person who has high control over his Adam’s apple. Take a minute, place a finger on your Adam’s apple and start speaking louder and louder. You’ll realize that it starts going up your throat. The same happens when you reduce your volume. This up and down movement is the placement of your voice notes to the required pitch. Where does autotune come into the picture? When vocals are generally recorded in a studio, the mic captures the exact frequency of your voice and records it. But even though the studio is soundproof, there are very small sounds which interrupt and clash with your voice levels and the mic records them. Due to this, there are small variances in the final output. To correct this, autotune is used.

Autotune can broadly be classified into two categories. Pitch correction and Extreme tuning.

This is something which was initially invented to alter minor corrections in the pitch. Every single voice you hear in the movies which does not sound robotic is pitch corrected. Even professional singers use it to get the perfect pitch. Pitch correction in a way is good as it helps beautify the human voice and gives a pleasant feeling to listen to it. Pitch correction is automatically done by the software we use and does not require any human programming.

This is something which can make any person on the earth sing. If you’ve ever heard a song that sounds very robotic and modulated, then, yes, it’s extremely tuned. In this, however out of tune the human voice sounds, the notes are manually adjusted according to the tune required. This is a  bad feature as there’s no real effort in singing that’s actually put. With this, if you ever recorded a clip of you speaking a few sentences in a beat, they can be manually tuned and turned into a song.

There have been several instances where there were protests to ban the use of autotune. Pitch correction is acceptable but extreme tuning and electronically manipulating voices ruin the career and effort of a real singer. Artists like Ed Sheeran and Shawn Mendes have been giving live concerts with the tag ‘On The Spot’ where there is no electric modulation in the voices and everything is performed by pure talent. True, autotune was created as a aid for singers to add a perfect touch to their voice but with additional tools such an extreme tuning there has been a  loss of real talent.

Ayrton Senna. A man whose legacy lives on to this day. Most modern-day drivers look up to him. He has won 41 Grand Prix in 162 races, has been on the podium 80 times, and has won the world drivers championship... END_OF_DOCUMENT_TOKEN_TO_BE_REPLACED

As the night grew darker, enveloping an empty street with mystery and fear, it embraced two college students, Matteo and Ace. Drunk and floundering into the dark alley, they hadn't realised how far they had wandered until they came across... END_OF_DOCUMENT_TOKEN_TO_BE_REPLACED

The lockdown, for most of you, was the most boring time of my life. Six months of staying at home didn't do me any good apart from the fact that it brought me and my dad closer by giving us... END_OF_DOCUMENT_TOKEN_TO_BE_REPLACED

“Hand me the gun and don’t move a muscle”, an injured Shankar Narayan whispers to his son, while they take cover under an old Contessa. The little boy does exactly as his father says, his hands trembling, desperately trying to... END_OF_DOCUMENT_TOKEN_TO_BE_REPLACED