What happens when anger, alcohol, and drugs take over a person?

The debut work of  Sandeep Vanga, the director of the film, made a jaw-dropping first impression as he swooped in with Arjun Reddy into the Telugu Film Industry. The lead character (Arjun) has been played by Vijay Devarkonda, who needs an enormous appreciation for his dedication and the courage to pull off a role with negative shades at the early stage of his career. The lead female role (Preethi) was played by Shalini Pandey, who performed  surprisingly well in her first film showing vulnerability and innocence as much as the character needed. 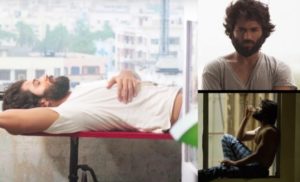 The movie depicts the story line of a heartbroken medico. Arjun, though being a topper of the university and being one of the exceptional house surgeons, can’t foresee  the consequences  tailing his anger. He falls in love with his junior (Preethi) and as the time flies, they  grow a deep relationship. This relationship is deliberately broken by Preethi’s father who gets her married to a guy from her caste. This incident makes Arjun heartbroken, weaker, and more vulnerable to alcohol, drugs, and vices.What follows the story is how he tries to overcome his pain of losing a loved one and how he manages to become a normal person again. 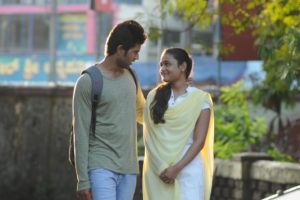 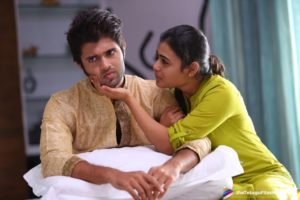 The other significant character in the movie is Shiva, Arjun’s friend, played by Rahul Ramakrishnan.  One definitely needs to put their hands together for his performance. All the characters in the movie speak in a casual Telangana slang which gives a homely feeling to most of the audience.

Also, there is a lot of mature content in the film which makes the elderly think twice before watching. But for the youth, this is a wonderfully framed  story  with free spirited nature.  What defines Arjun Reddy as a character is his attitude and confidence.  What defines ‘Arjun Reddy’ as a film is the purest unconditional love from an angry young man. Radhan, the music director has given the best music to fuse with the situations of the film. The songs are good but the background music is top-notch which makes our blood rush.

This movie is without a doubt Vijay’s career-maker and leaves a mark of  the youth oriented genre in the Telugu Film industry. If you’re still biting nails about which movie to watch this weekend, this is the one.

P.S. :- My condolences to the people who’re named Amith.

The corporate industry is notoriously famous for having the highest pay grade difference for employees working in the same company at different levels doing the same or similar jobs. This difference attracts several young engineers and management graduates into this... END_OF_DOCUMENT_TOKEN_TO_BE_REPLACED

Aren't all of us artists trying to express ourselves in this world? In my opinion, art is a form of expressing an emotion. Learning how to express our subconscious emotions and communicate with them will take time but what is... END_OF_DOCUMENT_TOKEN_TO_BE_REPLACED

The human touch. Such a simple thing, yet one that holds immense power. Almost like a miracle. Wonder why? Read on.  We've been gifted with the five senses, namely: vision, speech, smell, hearing, and the most beautiful of all, touch.... END_OF_DOCUMENT_TOKEN_TO_BE_REPLACED

[Trigger Warning] The following reading contains potentially distressing information about violence, brutality and sadistic practices. The reader is advised to use their discretion to continue reading. “For the last time, you don’t have to do this. They will finish the... END_OF_DOCUMENT_TOKEN_TO_BE_REPLACED

“THE SWAT TEAM BURST IN. THERE WAS CURTIS GREEN COVERED IN COCAINE AND FLANKED BY TWO CHIHUAHUAS” ~The Untold Story of Silk Road by WIRED In early 2011, law enforcement agencies were caught with their pants down when drugs began... END_OF_DOCUMENT_TOKEN_TO_BE_REPLACED