Are You Afraid of the Dark?

Are You Afraid of the Dark?

“When black cats prowl and pumpkins gleam, May the luck be yours on Halloween.”

Straddling the line between fall and winter, Halloween is a time of celebration and superstition. Being the second most commercial holiday after Christmas, it is a huge part of America’s culture. Observed on 31st of October in a number of countries, it is the eve of Western Christian feast of All Hallows’ Day.

Unlike the Indian festivals like Diwali, Dusshera, Holi and the rest, we must accept the fact that we know very little about this spooky celebration- Halloween. You may have seen people dressing up in weird/scary costumes and children going from door to door asking for treats like candies with the phrase “trick or treat” and really wondered why!

So, it’s Time to peep into the darker side o’the world! 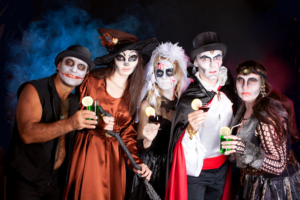 The tradition of dressing in costume for Halloween has both European and Celtic roots. Hundreds of years ago, on Halloween, it was believed that ghostly spirits came back to the earthly world and  people thought they would encounter them if they left their homes. To avoid being recognized by the spirits, they’d disguise themselves with masks after the dark so that the ghosts would mistake them for fellow spirits. This practice eventually turned out to be a fun activity today.

If it were not for pumpkins we should be undoon.”

Of course, you might  have really seen a lot of pumpkins carved into the shape of an evil smiling face with a yellow gleam from the inside of the pumpkin. Ever wondered where this tradition came from?

Earlier, there was a tradition to build huge bonfires in the fields and it was believed that fairy shadows lurked in the shadows  to distract them from settling in the houses or farms, people used to carve rudimentary faces into large turnips and place candles inside them. Eventually, the usage of turnips vanished away and  pumpkins -Jack O’lanterns took their place.

“Trick Or Treat, Be so Sweet, Give me something Good to Eat” 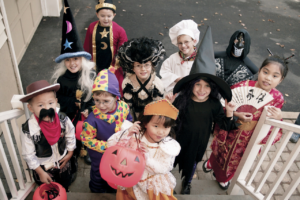 Trick-or-treating is a Halloween custom for children in many countries. Children in costumes travel from house to house asking for treats such as candy with the phrase “Trick or treat”. The “trick” is a threat to perform mischief on the home owners or their property if no treat is given to them. Earlier, during the festivities, poor citizens would beg for food and families would give them pastries called “soul cakes” in return for their promise to pray for the family’s dead relatives. This practice, which was then referred to as “going-a-souling” was eventually taken up by children and is now referred to as “trick-or-treating”.

Though it’s a day of celebration and  relish, do remember that there are a  lot of myths and superstitions that are followed. Whether you believe them or not, I must caution you dear; Beware of the ghouls that may follow you through the dark!  (Just Kidding) 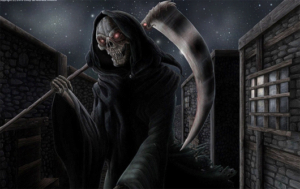 “Let the Vampires get their blood.

the streets, with the kids

So, here’s the warning, use lots of care.

This is the night that Ghouls scare.

If you see one, be ready to run

but otherwise kids, go out and have fun”

[Trigger Warning] The following article contains acts of cruelty and violence. Reader discretion is advised. I opened my laptop, exhausted from all the classes at college, (not) ready to log in to another class when I stumbled upon “Monster: The... END_OF_DOCUMENT_TOKEN_TO_BE_REPLACED

“How long are you planning to cry and sleep in here?” I asked her, as I raised the blinds in her dark bedroom. Seeing the chocolate wrappers and empty Ramen cups spread across the room, I couldn't help but sigh.... END_OF_DOCUMENT_TOKEN_TO_BE_REPLACED

The corporate industry is notoriously famous for having the highest pay grade difference for employees working in the same company at different levels doing the same or similar jobs. This difference attracts several young engineers and management graduates into this... END_OF_DOCUMENT_TOKEN_TO_BE_REPLACED

“THE SWAT TEAM BURST IN. THERE WAS CURTIS GREEN COVERED IN COCAINE AND FLANKED BY TWO CHIHUAHUAS” ~The Untold Story of Silk Road by WIRED In early 2011, law enforcement agencies were caught with their pants down when drugs began... END_OF_DOCUMENT_TOKEN_TO_BE_REPLACED

From a very young age, we are socialized to behave according to our sex. Boys are taught to be “masculine” and girls are taught to be “feminine”. But are there any biological differences between a man and a woman which... END_OF_DOCUMENT_TOKEN_TO_BE_REPLACED