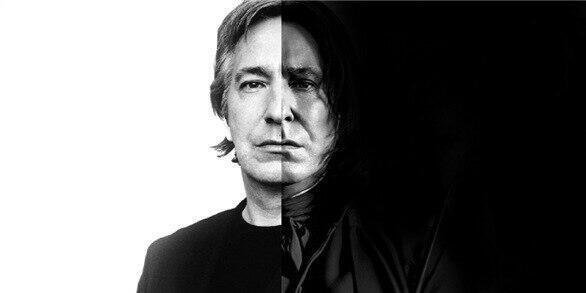 A tribute to Alan Rickman - The Half-Blood Prince

I remember the very first time I saw the Sorcerer’s stone.
I don’t remember when I saw it, or who I saw it with, but the one thing I do remember is the sheer joy I felt upon looking at this beautiful, fantastical world of wizards and witches, friendship,bravery and Magic. I was ecstatic when I found out that the movie was adapted from a book and I remember seeking it out and getting lost in it’s pages.

To me, it was a brilliant escape from my life, a temporary respite from all the lousy things happening around me. Let’s face it: Teenage years are a crappy time for most of us. Everything in and around us is changing and to me, Harry Potter was like coming home after a long day. I would definitely credit this series for helping me grow up and gently teach me lessons on bravery, sacrifice and true friendship. To this day, the mention or reference to this beloved series brings a smile to my face.

Severus Snape was one of the most polarizing characters in the series and a very good example of character development. In the span of seven books, he went from a greasy, vaguely evil side character to a complex man with a grey past and layers of secrets which definitely sent fans into a tizzy trying to decipher the reason behind his behaviour and to finally decide if he really was a good guy all along.

J.K. Rowling herself has admitted that she had written the character of Snape keeping Mr. Rickman in mind. He was a renowned Actor and Director most notably known to play antagonistic characters with complexities. He earned recognition for his role as Hans Gruber in “Die Hard”. He had a profound love for theatre which he always called “Home” and has notably rejected movie roles in favour of the stage. He has won many awards including a Tony, BAFTA, Emmy, Golden Globe and a Screen Actors Guild Award.

It feels comforting to know that if I open the books again, or watch the movies again, I would find that part of myself. Like J.K. Rowling said: “Whether you come back by page or by the big screen, Hogwarts will always be there to welcome you home.”

R.I.P Mr. Rickman. I may not have seen much of your work but you brought Severus Snape and his story to life for me and for that I am thankful. Always.

Each person does see the world in a different way. There is not a single, unifying, objective truth. We're all limited by our perspective. - Siri Hustvedt Perspective. It is a beautiful thing in a way that, all of us... END_OF_DOCUMENT_TOKEN_TO_BE_REPLACED

[Trigger Warning] The following article contains acts of cruelty and violence. Reader discretion is advised. I opened my laptop, exhausted from all the classes at college, (not) ready to log in to another class when I stumbled upon “Monster: The... END_OF_DOCUMENT_TOKEN_TO_BE_REPLACED

[Trigger Warning] The following reading contains events of death. **This is entirely a work of fiction and no distress was intended for any family/person affected by a natural disaster. “Please Ma!” Arya pleaded. “I made it to my final semester.... END_OF_DOCUMENT_TOKEN_TO_BE_REPLACED

“THE SWAT TEAM BURST IN. THERE WAS CURTIS GREEN COVERED IN COCAINE AND FLANKED BY TWO CHIHUAHUAS” ~The Untold Story of Silk Road by WIRED In early 2011, law enforcement agencies were caught with their pants down when drugs began... END_OF_DOCUMENT_TOKEN_TO_BE_REPLACED

[Trigger Warning] The following reading contains potentially distressing information about self-harm. The reader is advised to use their discretion to continue reading.   Darkness cocooned her room, her heart twisted, churned, her fingers closed around her throat, nails digging into... END_OF_DOCUMENT_TOKEN_TO_BE_REPLACED