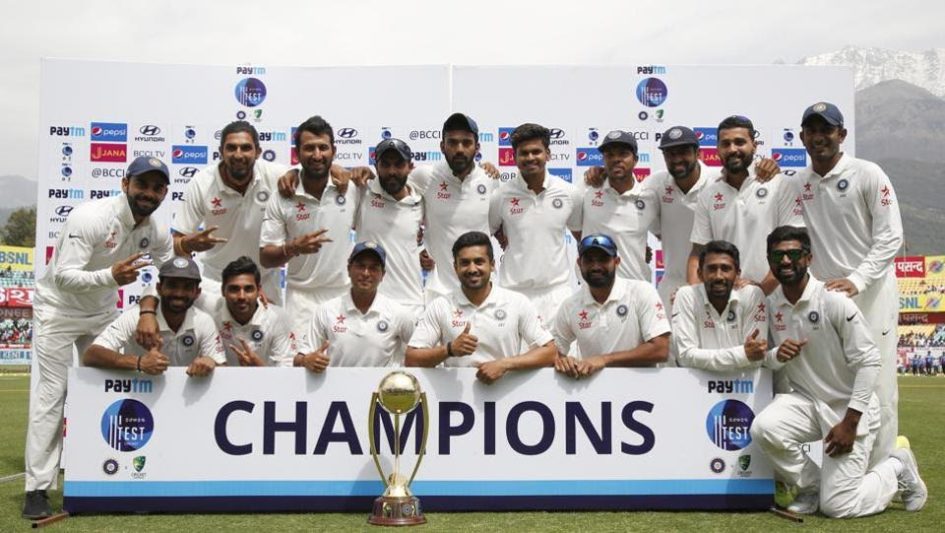 “When you let anger get the best of you, it brings out the worst in you”.

This may not make complete sense right away, but will eventually do as I proceed. March was the month which made every cricket enthusiast a couch potato and provided a lot of fodder for gossip. The eagerly awaited India vs Australia test series was nothing short of a Bollywood film with departments like action and drama having an equal share. The  Indian team was on an all-time high thanks to Kohli’s burgeoning stint as a captain. The mighty Australians who were the underdogs surprised everyone by winning the first match and leaving the Indian spectators in shock. What followed the first match was a journey in itself. A journey which had sport, heroism and most importantly hostility.

It all started with the Australian captain, Steve Smith, trying to seek help from the dressing room for a decision which infuriated the Indian captain. This attempt at chicanery by the opposition obviously did not go well with the Indian team making them go bananas. What followed this incident was a series of events which not only dampened the spirit of the game but also led to a miserable fall out between the players of both the teams. Be it Ishant Sharma’s constipated facial expressions to mock the Aussie batsmen, or the abusive banter between Ravindra Jadeja and Matthew Wade, the decorum of both the teams had  gone for a six. What was really surprising to watch, was that Australia was so severely  intimidated by Kohli’s aggression that the Australian media denigrated the Indian captain by calling him the Donald Trump of cricket, thereby referring to him as a maverick captain. But this endeavour of theirs did no harm, as Kohli surprisingly chose to stay nonchalant and proved how beautiful it is to stay calm when someone expects you to be enraged. Not that it would have changed the outcome, but the fact that he let the result of the series respond.

No doubt, there were several positives drawn from the series. To start with, K.L Rahul’s excellent run as an opener proved to be the best replacement for the seasoned opener Shikhar Dhawan; Ravindra Jadeja’s terrific all-round performance with significant match winning contributions; the dream debut of Kuldeep Yadav, who came up with a whole new repertoire which led to Australia’s debacle in the last match; Ajinkya Rahane’s brilliant job as a stand-in captain in the final match. But for me, the one event which deserved the maximum plaudits was Cheteshwar Pujara’s majestic innings in the 3rd test. Batting for nearly six hours in the hot sun, facing 525 deliveries from the Australian bowlers who were as hungry for a wicket as wolves who had smelled blood, it was certainly one of the most arduous innings ever played. The temperament and perseverance of Pujara was put to a test of time and his fortitude remained impervious, something which now serves as a benchmark.

The biggest achievement by the Indian team was its superb performance in spite of almost no contribution from Kohli with the bat. It was one of the most forgetful series for Kohli as a batsman because his performance was abysmal, but then it came as a blessing in disguise because the Indian team proved that cricket, after all, is a team sport.

“How long are you planning to cry and sleep in here?” I asked her, as I raised the blinds in her dark bedroom. Seeing the chocolate wrappers and empty Ramen cups spread across the room, I couldn't help but sigh.... END_OF_DOCUMENT_TOKEN_TO_BE_REPLACED

Each person does see the world in a different way. There is not a single, unifying, objective truth. We're all limited by our perspective. - Siri Hustvedt Perspective. It is a beautiful thing in a way that, all of us... END_OF_DOCUMENT_TOKEN_TO_BE_REPLACED

[Trigger Warning] The following reading contains potentially distressing information about self-harm. The reader is advised to use their discretion to continue reading.   Darkness cocooned her room, her heart twisted, churned, her fingers closed around her throat, nails digging into... END_OF_DOCUMENT_TOKEN_TO_BE_REPLACED

[Trigger Warning] The following reading contains potentially distressing information about violence, brutality and sadistic practices. The reader is advised to use their discretion to continue reading. “For the last time, you don’t have to do this. They will finish the... END_OF_DOCUMENT_TOKEN_TO_BE_REPLACED