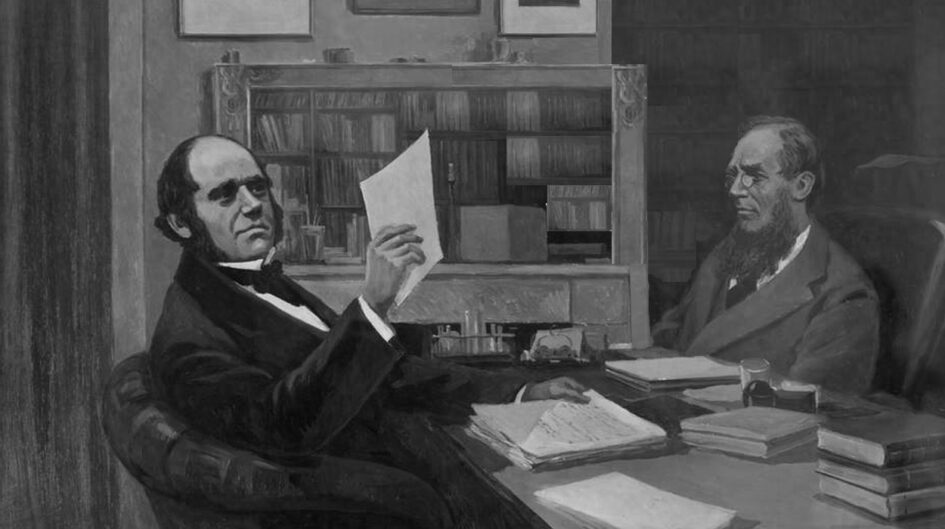 The scene before his eyes frightened Charles Lyell.

He couldn’t tell if he was looking at the same man who ignored his seasickness and spent half a decade sailing the oceans, just for the sake of research. He had trouble believing that a man who had travelled the world, witnessed natural disasters, and battled multiple heart ailments could look this defeated.

In front of him, Charles Darwin was struggling to keep his composure as he was reading the newspaper. The man recently entered his 50s and had been grieving the loss of another child, and yet had somehow managed to write a 500-page book that combined all of his life’s work on the evolution of species. Lyell had mentioned to Darwin that his findings would challenge all the existing beliefs of the scientific world and that he should be ready for some backlash.

Neither anticipated that the book – On the Origin of Species – would offend the clergy and natural theologists to such a degree. Reviews of Darwin’s works were either filled with insults or openly called his findings and conclusions invalid. Caricatures were made with Darwin’s face on the body of a monkey, a reference to the evolution of human beings from apes, taking jabs at Darwin’s intellect.

How does one respond to that?

“It is okay, my dear friend,” Lyell said, trying to comfort Darwin. “All their lives, they have been reading the Bible, and it claimed that every organism was created in the image of God. And out of nowhere, you conclude that there is no divine intervention, no perfect design, and you do it with proof. Things like these… are hard to accept.” Who am I kidding? Lyell thought to himself. He was Darwin’s friend for over two decades now. Even he was having trouble accepting the findings because of his Christian background. Yet, he couldn’t deny the sheer volume of proof in front of his eyes. Evolution IS real.

Darwin shook his head. “Thank you, my dear friend. I know how hard this is for you, and yet, you still stand with me. I am glad to have your company on this journey. With regards to the papers, I suppose that this is how it is going to be for a while. Nevertheless, we must keep pushing forward.” He instinctively corrected his posture and sat a little straighter. “Let us continue reading through. We might find something in their reviews that we can call them out on.”

Lyell smiled. He knew that Darwin was still feeling sad – he could see it in his eyes. But they would keep trying to convince the world.

They decided to take a break. Darwin smiled and expressed his gratitude to the house lady as she poured him a cup of warm English tea. In front of him, Lyell was looking out the window. He set his gaze towards the Church across their street. Bless the man for being open to changing his beliefs, even at his age. There was no way he could publish the book without Lyell’s help. And yet, he still felt sad for involving the man in this mania. He should be relaxing in the countryside. Yet, he insisted on helping Darwin see this through. I should probably try to convince him to leave. He might listen to what I have to say this ti-

“What is it that motivates you, old friend?” Lyell asked. Huh? Where did that come from? Darwin straightened himself and opened his mouth to answer, only to realize that he didn’t have one. Lyell smiled at the confusion on his face and continued, “Why do you keep opposing the Church? You were deeply religious as a child and you still consider yourself as theistic. We both know that you don’t do it for fame or money. You hate the former and have enough of the latter. Despite all the insults, you still keep going. So, what is it that pushes you to continue this work?”

Darwin’s confusion only grew. “I think… I think I need some time to answer that.”

Lyell smiled again and looked at his watch. The break ended.

Lyell sank bank into the comfortable rhythm of his work. He wanted an answer to his question, but he would wait. A few minutes later, the doorbell rang, indicating the arrival of the evening newspaper. As Lyell was about to get it, Darwin cleared his throat.

“There is no fixed truth, Lyell. What we believe in, keeps changing from time to time. But the new orthodoxy is claiming that we must read the Bible literally and that questioning the literal interpretation is a sin. Tell me, Lyell, how can we proceed further if we cannot question our existing beliefs or accept the proof in our findings? We have evidence. We have a way forward. To deny it is to deny progress. And for us to give up is… it’s unacceptable. This isn’t about the Church or money or fame. Honestly, this is about sleeping peacefully.” He let out a grin as he said that.

Lyell nodded in understanding and returned a warm smile. Yes, he’s still the same man. He thought to himself. Despite his qualms, he too would keep pushing. “Let us continue.”

“What is it about being blind that it makes you want to walk the dog the whole time?” “When it comes to environment, it's not us but our children and our children's children that will pay for our mistakes, which... END_OF_DOCUMENT_TOKEN_TO_BE_REPLACED

Flash, Flash, Flash. Various screens show the face of the actor. A woman crying in the corner while another loves the visual of her crying. The editor looks at all of these different shots and lets out a satisfied... END_OF_DOCUMENT_TOKEN_TO_BE_REPLACED

“How long are you planning to cry and sleep in here?” I asked her, as I raised the blinds in her dark bedroom. Seeing the chocolate wrappers and empty Ramen cups spread across the room, I couldn't help but sigh.... END_OF_DOCUMENT_TOKEN_TO_BE_REPLACED

Police sirens, an opened door, a step out of the flat that had been an abode and a prison for 6-years-9 months-23 days—freedom at last?   Julian Assange was under no such false impression as the British police dragged him... END_OF_DOCUMENT_TOKEN_TO_BE_REPLACED