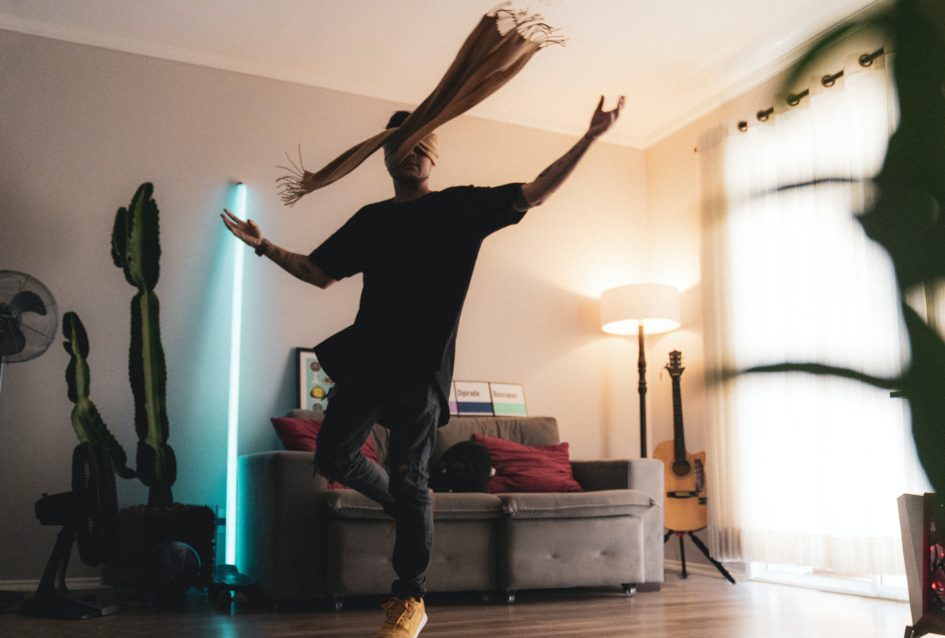 When the year began with rampant bush fires in Australia, an almost-triggered-the-world-war-3 magnitude conflict between the USA and Iran, and the tragic deaths of Kobe and Gigi Bryant, people thought, just maybe, we’ve had our share of trials and tribulations for the year. Turns out, 2020’s theme was “element of surprise”. A total-collapse-of-the-global-economy and cancellation-of-the-Olympics later, here we are. 2020 hasn’t the faintest intention of dropping in its productivity levels. And meanwhile, humanity is finally developing the sanitary habits it should have had to begin with.

When people said they hoped this year would take their breath away, they probably didn’t mean it literally. As a direct result, we are now inevitably and indefinitely stuck in our homes. And let’s be honest, we have skipped parties in favor of staying home before, but we appreciated having a choice. Although the idea of an indefinite holiday was appealing, that initial excitement soon faded out and left people with an overwhelming sense of ennui.

As the lockdown extended further with no clear end in sight, it somehow became the quarantine norm to upskill and learn new things and needless to say, broadcast the whole process on social media. Cue the jokes on how everyone is going to emerge out of lockdown as a blogger or chef. What began as a wholesome way to remain socially connected, turned into an exhibit of productivity levels. But how rational is this criterion of productivity?

Being ambushed by such posts may not have the desired effect on someone looking for psychological relief or comfort online, now that the internet is the only public space where everyone can walk and not maintain 6 feet distance. “Productivity” is a business term, and in my humble opinion, should never be used in a situation like this. “Fulfillment”, or “accomplishment” rather, make the cut. If I watch all the movies that I had pigeonholed and someone else reads a book, how are they comparable for productivity levels?

Multiple posts circulated on social media, saying, “If you don’t come out of this quarantine with either a new skill, your side hustle started, or more knowledge gained, then you don’t lack time. You lack discipline”. And maybe, I do. We all go through periods of uninspiredness and fatigue. If productivity can be a goal per se, my goal can be the antithesis of productivity. A state of having no steadfast targets or expectations.

A popular story that emerged is that Newton discovered gravity and Shakespeare wrote King Lear while in quarantine. Now, with the spread of COVID19, this light-hearted story in Washington Post is representative of many articles circulating: “During a pandemic, Newton had to work from home, too. He used the time wisely.” Another would be this article by National Post: “Shakespeare wrote King Lear in quarantine. What are you doing with your time?” Social media’s version of this message is even more passionate: Get that ideal body, finish that course, or leastwise align your life and discover your purpose. If not, you’ve failed the at-home pandemic test.

I wanted to write an article on productivity during the quarantine. It took me 2 weeks to do it. I really wanted to produce something worthwhile during this time, and feel like I was contributing. But it took me a minute- or a month in quarantine time- to realize that we often presume our value is determined by how much workload we have. Not how productive we are, but how busy. Because being busy would imply you were competent and therefore had your hands full. Being productive, however, would mean you were also organized and didn’t have to appear caught up.

But more often than not, the gratification involves appearing important, not just being efficient. And that drives our generation to treat everything as work: baking intricate recipes followed by endless photoshoots, fast-forwarding through Netflix thinking you’re consuming it more efficiently and concocting elaborate lists of books you wanted to read. But before you realize, these slowly start to weigh you down, they go from being stress busters to pending homework.

If Shakespeare can write King Lear and Newton can invent Calculus, we can at least start a YouTube channel, right? No. The plague didn’t ignite the minds of Newton or Shakespeare into creating something that was anything but within their natural ability and scope. For someone who couldn’t afford to indulge in their hobbies before, this lockdown has been a blessing in disguise. From finishing a book they had begun to write to finally starting a blog, there are people who have had no problem taking the reigns. And being one of those people is great, but make no mistake; that is in no way, the ideal blueprint for life in quarantine.

Not holding yourself up to the standards set online, but rather catering to what is in your best interest is the best you can do for yourself, which sometimes can be as simple as binge-watching Netflix. That’s you being productive and taking time to regain your mental vitality. As our days keep deviating farther from our known normal, it would be insane to still follow the old rules. With an ongoing pandemic, why should it matter if I don’t produce something great? Who cares that I’m probably not on track to emerging out of quarantine with a certification in astrophysics? It’s okay to let go. 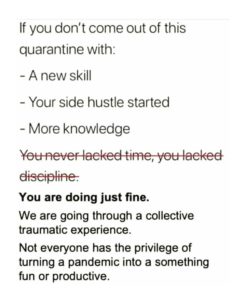 Hope was an absurd emotion.   It was a chilly midnight when it happened for the first time. Monique was a light sleeper. After all, it didn’t take much more than a dull, heavy thud for him to jolt awake... END_OF_DOCUMENT_TOKEN_TO_BE_REPLACED

The corporate industry is notoriously famous for having the highest pay grade difference for employees working in the same company at different levels doing the same or similar jobs. This difference attracts several young engineers and management graduates into this... END_OF_DOCUMENT_TOKEN_TO_BE_REPLACED

Comfort space is personal to every individual. It allows you to be yourself and cherish the moments as they are with no judgment whatsoever. As for me, movies and music do the job. Speaking about movies, I have been exposed... END_OF_DOCUMENT_TOKEN_TO_BE_REPLACED

[Trigger Warning] The following article contains acts of cruelty and violence. Reader discretion is advised. I opened my laptop, exhausted from all the classes at college, (not) ready to log in to another class when I stumbled upon “Monster: The... END_OF_DOCUMENT_TOKEN_TO_BE_REPLACED

From a very young age, we are socialized to behave according to our sex. Boys are taught to be “masculine” and girls are taught to be “feminine”. But are there any biological differences between a man and a woman which... END_OF_DOCUMENT_TOKEN_TO_BE_REPLACED