What the world would do without Google

What the world would do without Google

A one word solution to almost any possible question, if you think Google is merely what you see on your home screen, then think again. It's more than just a company that provides a few services to make lives easier; it in fact is the very basic digital infrastructure the world thrives on. The name ‘Google’ is actually derived from the mathematical term ‘googol’ which is basically 1 with a hundred zeroes following it. Google’s principles don't just lie in simplifying things, but in enabling people to discover and explore on their own. That's why it single-handedly dominates  the fields of search, online communication, publishing, transactions, and content sharing.

In a world that progresses at an exponential rate, people want answers, and they want them fast. At Google, they not only find solutions to real-time problems, but find the problems themselves; they are constantly on the lookout for things they can change and improve for the better. Nothing skips its eye, for it manages to facilitate some of the most bizarre functions like being able to see the map of Mars (just search for Google mars), to the most sensitive issues: If you Google 'I want to commit suicide', above all search results, Google provides you the suicide helpline number of your country. One can almost say that we are rather pampered by Google, which always has the answers to our homework, can tell you how much spice to put in Biryani, and can share more gossip than even your best friend. But that's to expect from a company whose main objective is to make a change, not profit. Moreover, no part of a Google office is allowed to be more than 150 feet away from some kind of food. Talk about work goals. 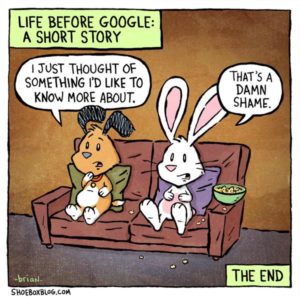 This, however, may lead us into thinking that due to the access to such a resource, our natural instinct to seek  for knowledge and new things may have numbed, but only to have the entire world open in front of you at a touch. And that, my friend, is empowering. That's why it's one of the most valuable companies to ever exist. And I mean this literally and figuratively, because its net worth currently stands at 498 billion dollars.  But what will truly amaze you are the sheer numbers Google works with. Over a billion people in the world use Gmail. Google Maps is the go-to solution for anyone travelling to a new place. YouTube is the world's largest platform for sharing media content. To top it all off, since 2010, Google has been acquiring an average of one company EVERY WEEK.

So at this very moment, if we didn't have Google, we wouldn't just lose our search engines. People would lose jobs, contact with their loved ones, the ability to acquire information, the ability to publish, and a lot more, resulting in nothing less than a handicap. There's no debate about how priceless it is. So to the question- "What would happen to the world without Google?", my answer is simple- "I don't know, Google it!"

“If only our eyes saw souls instead of bodies, how very different our ideals of beauty would be.” ~ Anonymous   “I wish I had a body like her….” “I wish my arms were like his…..” There are so many... END_OF_DOCUMENT_TOKEN_TO_BE_REPLACED

As the year 2011 rolled in the world population hit 7 billion. Leonardo DiCaprio finally won a well deserved Oscar and for the first time in history, a man married a software. Here is a list of 19 events that... END_OF_DOCUMENT_TOKEN_TO_BE_REPLACED

*Research and studies have shown us that time fly faster when we are learning something new. .As we take a step back and think, we notice that as we grow older the time around us starts moving faster than ever.... END_OF_DOCUMENT_TOKEN_TO_BE_REPLACED

On January 11th 2020, KMIT celebrated its first event of the new decade: Patang Utsav. This event is a long-standing tradition of KMIT where we celebrate Sankranthi, the festival of harvest. The celebrations commenced at 9.00 AM and continued till... END_OF_DOCUMENT_TOKEN_TO_BE_REPLACED

Life took a horrifying turn for Sushma after that fateful day. The day that changed her life. There she sat under the windowpane, dressed in rags, her hands bruised. Her eyes were swollen and tears ran down her cheeks. How... END_OF_DOCUMENT_TOKEN_TO_BE_REPLACED