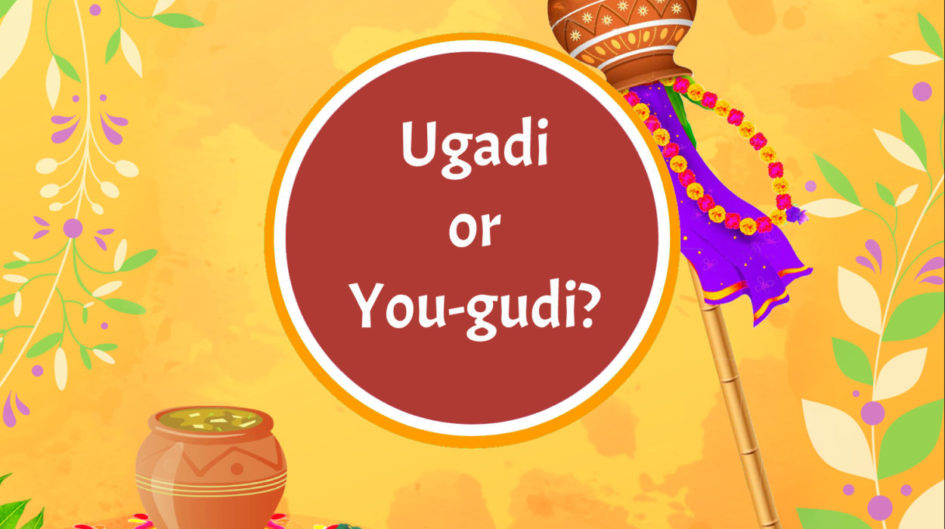 As the cool breeze of winter is slowly changing into the warm summer loo, the grape and orange stalls are steadily replaced by the King of fruits. Markets lingering with the smells of Himayathi, Rasiyaal, Baiganapalli, Dashahari, Kesar and the sweetest Hapus Alphonso mangoes. This change reverberates the start (aadi) of a new era (yuga), celebrated with much fervor as, the festival of Ugadi.

Meanwhile, on the other side of the rivers of Godavari and Krishna, lie the land of Marathas, hoisting the Gudi flags. Ugadi is celebrated as the beginning of the new year in the region of Maharashtra.

Ugadi or Gudi Padwa is a significant affair for the people living beyond peaks of the Vindhya Mountain range. It is a day of realization and change.

Let’s take a look at what went on at the beginning of this new year.

Either festival starts with the drawing of the beautiful Kolams (Karnataka), Muggus (TS/AP) or Rangoli (Maharashtra)  in front of the houses. While Kolams and Muggus are connections made on the grid of dots, the Rangolis are generally drawn in freestyle. Traditionally, the powder used for making these designs is made of coarsely ground rice. Thereby, once the kolams were drawn, it’s considered a feast for the tiny creatures like ants or sparrows, signifying the saying ‘Vasudhaiva Kutumbakam’, “the world is thy family, found a home in the ants’ lunch!”.

The mango leaf garlands hung across the doors, are also an integral part of the festival. ‘Why?’ you ask?. Well, mosquitoes, that’s why! The transformation from cold winters of January to short rains of April and then to wild summers of May, make the mosquitoes go on a blood sucking spree. That’s where the mango leaves come into the picture. The fresh leaves, when woven into garlands end up ‘acting’ as an insect repellent, all thanks to its sap. The belief is that they prevent the hounds of insect hell from entering the house. 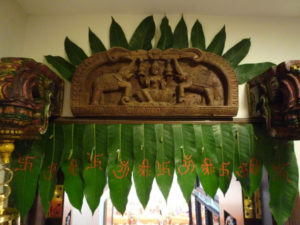 Often served in mud-pots, the Ugadi Pachadi is a blend of all tastes and by extension- emotions. The six flavors of the dish, preparing you for what’s in store for the year ahead. Prepared by mixing the sour tamarind pulp, sweet jaggery, tangy cut raw mango, bitter neem buds, hot chili powder, and salt, they stir up the feelings of disgust, happiness, surprise, sadness, anger, and fear respectively. Truly, only a cook can explain the horrors of adding even one extra pinch of salt!

The festival of Ugadi then proceeds further by offering salutations to all the Gods and elders of the house. Parents ensure that their kids go outside, and stay happy and active throughout the day. Dishes like pulihora (tamarind rice), gaaralu (wada), avada (dahi wada), rasam, seviyan kheer, bobbatlu (Bengal gram sweet bread), halwa puri are a common sight. 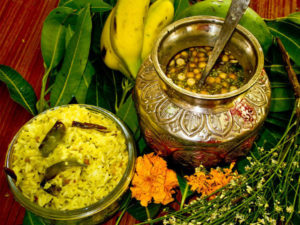 The Gudi flag stands erect on its stiff wooden staff emphasizing the strength in oneself. The neem leaves, revered as the god plant for their medical miracles, also find their place on the staff.

Attached to it, is the garland of white sugar candies and flowers, indicating the sweet happiness and auspiciousness of life respectively. The silk saree/cloth wrapped around it signifies the splendour while the reverse brass or silver pot on its top indicates success. The turmeric-kumkum duo embodies fortune while the coconut placed at the bottom signifies accomplishment.  The betel nut commences the resolution while the base upon which Gudi stands echoes the stability in life. 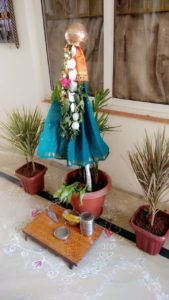 With every part and particle of this staff exploring life, we often drown deep into the thought of how far we have come and how far we have to go. Life is but a blend of beauty and sorrow. The leaves of the tree wither only to give way for new ones. The waters of the oceans succumb to the sun’s heat only to flow down again as much-awaited rains.

The tangy taste of mangoes quickly replaces sweet jaggery water of pachadi. The expressions of a child’s face twitching from disgust towards the bitter neem leaves, then turning to a sweet smile at the sight of sugar candies.

The Ugadi and Gudi Padwa,  signify the many facets of your life. They force you to understand the ups and downs of this mortal world, making it more of a You-gudi. G.D Madgulkar aptly puts it in words as, ‘Paradheen aahe jagati, putra manavacha; dosh na kunacha’. Which translates to, “lost is the son of the man in front of the world, and it’s no one’s mistake”.

What’s any festival without Food? You can hate food, you can hate eating but you cannot hate sweets! So, this Diwali there are a few specially picked sweets which are a treat to your taste buds, literally! Name         : Kaju Chaco... END_OF_DOCUMENT_TOKEN_TO_BE_REPLACED

Welcome to kMITRA, a monthly online magazine about all things KMIT and beyond. Far from being a regular college among many, KMIT has carved a niche for itself. As its students, we wanted to contribute to it while creating a... END_OF_DOCUMENT_TOKEN_TO_BE_REPLACED

Now that the Diwali season is finally here and so are the celebrations and parties of the season, it’s time for you to be in your ethnic best and make a few heads turn. Here are a few tips that... END_OF_DOCUMENT_TOKEN_TO_BE_REPLACED

William Wyler’s 1953 classic “The Roman holiday”comes as a pleasant delight for people who have a fetish for rom-com movies. Roman holiday exudes an adorable romance between a princess (Audrey Hepburn) and a press correspondent Joe Bradley (Gregory Peck) in... END_OF_DOCUMENT_TOKEN_TO_BE_REPLACED

It is very heartening to note that we are creating a magazine for the KMIT students. I hope that this initiative will continue forever. At the outset , I would like to wish all the students a Happy Deepavali. In... END_OF_DOCUMENT_TOKEN_TO_BE_REPLACED