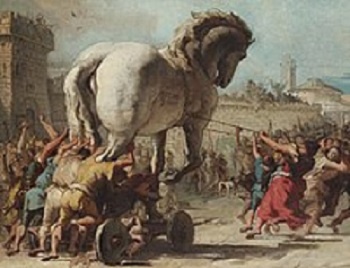 She couldn’t believe her eyes. She tried to look away, but it was like watching a train wreck. Terrifying and horrific, yet so mesmerizing. She’d known this was going to happen, but that didn’t make this any less heartbreaking. Soldiers charged at one another and blood spilt everywhere. There was utter carnage in the place she’d once called her home. Troy was going to Hell.

The Greeks had laid siege to the city for the last ten years. It had all started when her brother, Paris, abducted Helen, a woman considered to be the most beautiful in the world. Helen’s husband retaliated by waging war against Troy. The siege was caused by the fact that the Greeks were not able to storm the gates of Troy, and the Trojans did not have the strength to push the enemy back to the sea. And so it went on for ten years. The Greeks were getting desperate, wanting to go back home to their loved ones. The hero, Odysseus, came up with a plan that only Cassandra could predict.

“Honestly, Cassandra. How many times must I ask you to keep check of your wild imagination? How do you ‘see’ my white dress becoming red?” her mother complained. “Your father will soon return with the news all of Troy has been waiting for. Until then, stay in your room and speak to no one about your dreams.”

Cassandra felt great despair, something that had been the norm for her ever since she’d spurned Apollo, the god of prophecy. He had given her a curse which made her life miserable. His curse was that although she would make accurate predictions, no one would ever believe her. She had barely made up her mind to confide in her brother when they were summoned by her father, King Priam, to the outer balcony where he was addressing all of Troy.

“I bring great tidings, dear citizens! Those wretched invaders have left! We need not fear for our lives any longer. Come, let us rejoice and revel in our fortune.” The gathered crowd went crazy with the cheers. All the misery of the last ten years melted away. The uncertainty of the future and the inevitable destruction caused by the war were fears they had all harbored for too long. Such was their joy that the king had to wait before he could continue. “I bring even better news. Not only have the cowards fled after witnessing our might, but they have also left us something as a token of submission. It is a huge structure which will overlook all of Troy as a mark of our strength. This great horse will remind us that no matter how large the adversity, the Trojans will always triumph. The horse will soon be brought in and there will be a feast for every Trojan at the unveiling of the horse. Please proceed to the courtyard, where it will be displayed.”

Cassandra beseeched the king, “Father, please. Think about why the Greeks would flee without any warning. Why would they leave us a gift if they did not plan on retribution? Please father, listen to reason.” King Priam looked towards the heavens and sighed, “Dear daughter, this is not the time to doubt our good fortune. Our people are tired of the war. We need not steal their joy from them. Now, proceed to the courtyard with the rest of our citizens and keep your fears at bay.”

And so, the great wooden horse was brought into the main courtyard of Troy. People’s joy knew no bounds as they realized that they had won. For the first time in ten years, after the wedding of Paris and Helen, they were feasting. Ale flowed freely and the dancers moved smoothly. This remained the case until late night, when everyone either went to sleep or passed out drunk. Cassandra waited for everyone to leave the courtyard. She’d never done anything like this, but there was too much at stake here. She went close to the horse and inspected it. It was majestic. She could see why the Trojans had taken such a liking to it. Her heart raced at the thought of what she was about to do. She picked up one of the torches that were hung from the walls, and walked towards the horse with trepidation.

“CASSANDRA! Get away from the horse! If you do this, I will throw you to the dogs, I swear.” the king bellowed out. She sprinted towards the horse, hoping to do some damage before she would inevitably be caught. And it did happen. Before she had managed to reach the statue, soldiers had caught up to her and locked her up in her chambers. Her sleep was very restless that night, plagued by visions of what was about to happen. She woke up to the sounds of battle and pillage.

“God no, this can’t be happening. Not so soon.” she cried out while trying to break open the doors. She nearly fell out when the door was opened by her mother. “Darling, we’ll be safe. I promise, all of us will make it out of here. I’m sorry I didn’t listen to you earlier. We need to leave and regroup. Now.”

And thus, they ran. The Queen and the princess ran for their lives while the battle went on all around them. Their city was being destroyed by the invaders. ‘All because of Paris and Helen’, she thought bitterly. Her hate knew no bounds in that moment. If only Paris had never abducted Helen, Helen’s husband wouldn’t have led an army to their doors.

Cassandra and her mother went through one of the castle’s many underground passageways, and reached an opening through the walls. The sounds coming from the castle seemed far away now. Cassandra heard a rustle in the silence and acted on instinct. She went for the head of the enemy soldier who had tried to creep up on them. A smile crept up on her lips at the sight of his broken body. She heard a whimper behind her. Mother. Her mother lay on the ground, bleeding from a knife in her abdomen. Her eyes went blank and her white dress became red.

This summer, master a skill that will isolate you regardless of a pandemic! Step 1: Look up ‘recipes for beginners’. Scratch that. Search ‘easy recipes for dummies’. If you are using an optimal search engine, open the link you find... END_OF_DOCUMENT_TOKEN_TO_BE_REPLACED

While it’s true that the circumstances surrounding this quarantine can be scary at times, I am grateful for all the time I have had to do some much-needed soul searching. The lockdown started with me constantly wanting to go out... END_OF_DOCUMENT_TOKEN_TO_BE_REPLACED

“Global shares take a hit - Big shift in stock markets, where shares in companies are bought and sold, can affect the value of pensions or individual savings accounts (ISAs).” -- BBC News   “Consumer confidence collapses in May, the... END_OF_DOCUMENT_TOKEN_TO_BE_REPLACED

Amidst all the chaos in the world, with each passing day, there is a new conspiracy theory waiting to be heard. The internet is flooding with theories about the birth of the virus. These theories have a way of engrossing... END_OF_DOCUMENT_TOKEN_TO_BE_REPLACED

The pandemic season is upon us. At the time of writing this, we're all isolated from each other to protect ourselves and others more vulnerable than us. A by-product of this rather long isolation is just heaps of spare time.... END_OF_DOCUMENT_TOKEN_TO_BE_REPLACED