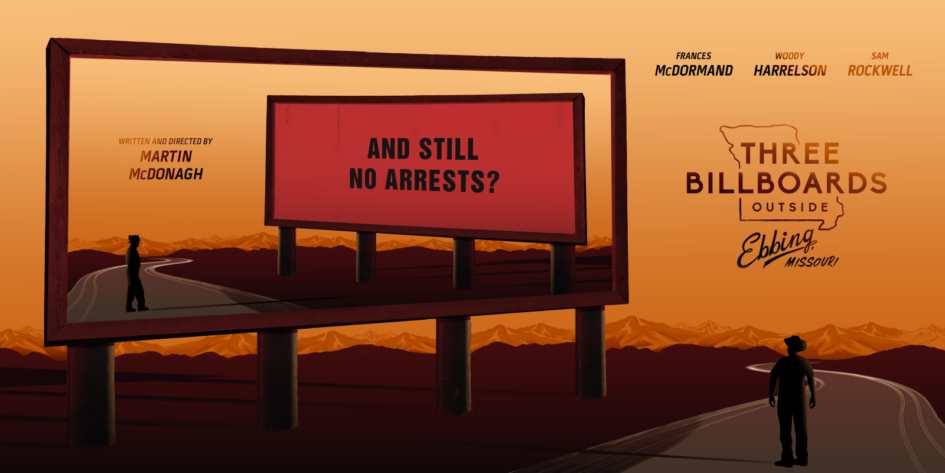 Who wouldn’t enjoy watching a cinder-black revenge comedy? The British-Irish filmmaker and playwright Martin McDonagh certainly experienced a breakthrough with his recent release. Capturing everyone’s hearts and minds, it has earned itself four Golden globes and has grossed $111 million worldwide. After making its way to the Oscars nomination, the film is creating havoc in the mindsets of people regarding its winning probability. This movie knows exactly how to keep a person engrossed and make a puppet of one’s emotions. Throughout the movie, you get to feel the high intensity comedy and, in few aspects, you get to question your own reactions to it.

The first and opening scene starts with Frances McDormand starred as Mildred Hayes riding into the town, Ebbing, and watching three huge billboards on the outskirts, which do justice to the title of the film. She is portrayed as a grieving mother who has recently lost her daughter to the inhuman act of rape. She walks into the local advertising company with an aura of confidence and determination asking to rent the disoriented hoardings on the towns outskirts. After a small verbal dispute, the firm’s owner bends to her whims. On the same day, people find a bold message written on the billboards accusing the local sheriff Bill Willoughby, hoping to gain some sort of reaction from town officers and people― be it in her favor or otherwise.

This film shows a banter between two strong willed people who seemed to have taken an oath to go against each other. Mildred single-mindedly wants to fight for justice or retribution regarding her daughter’s case and can go to any extent and fight against all the town people who stumble in her path. She has passed the stage of caring about others’ reaction or distaste towards her. On the other hand, there is the sheriff, a family man with iron-will and an allergy to stupidity. He has utmost respect for his work and believes in the ideology of retribution when only gained in the right path. Though he is ready to reopen the case, he is against Mildred’s ruthless mentality. When both of them finally get together to attain a common goal, the plot takes an interesting turn. You get to learn few qualities from these two characters like Mildred’s determination which never lets her stoop low for sympathy.

The plot also revolves and concentrates on few of its people like Mildred’s ex-husband and officer Dixon. The story is described in such an intricate way that all the characters seem befitting and cover all the shades of human minds. You get to find the abusive personality in Mildred’s ex-husband, the racist and the homophobe is displayed in officer Dixon and the naive girlfriend role is done by the 19-year-old girlfriend of the ex-husband.

Like any other movie plots, there are a few negative points in the movie which leave you wondering and pondering for hours. This movie has also gained its popularity and praise as its plot is mainly revolving around a widely discussed social issue. All in all, this film is an Oscar-worthy film. It can bombard you with a whirlpool of emotions, leaving you wanting for more and more. But McDonagh leaves no one off the hook, least of all his audience.

“RYAN! RYAN!” “Yeahh..” came a faint response from upstairs. “If you aren’t down here in the next five minutes, you might as well change into your pyjamas and tuck yourself into bed." yelled Evelyn from the living room, throwing books... END_OF_DOCUMENT_TOKEN_TO_BE_REPLACED

"Maiyya! Radha called me black, again!" The dark-toned Krishna cried while running back to his queen mother Yashoda. "Lalla", Yoshada smiled as she took some turmeric powder in her hand and applied it across Krishna's arm. "See, now you are... END_OF_DOCUMENT_TOKEN_TO_BE_REPLACED

Look at that elegant albatross, Spanning its wings wide and bright, Embellishing the creation's might, Squeaking aloud as it soars across.   Look at those lustrous fireflies, Invariably fluttering outdoors, To endeavour worldly chores, Like stars in a mortal guise.... END_OF_DOCUMENT_TOKEN_TO_BE_REPLACED

David wakes up to find everything unusual. The glittering sun rays that spread various hues of shine are not silver or gold, the grass is not green, the sky is not blue. Everything in sight is anomalistic to him. In... END_OF_DOCUMENT_TOKEN_TO_BE_REPLACED

Dawn was winding when Aahil was trying hard to get some sleep. He used his hands to cover his ears and sometimes even buried his head under a pillow. He couldn't listen to the onslaught of verbal abuse going high... END_OF_DOCUMENT_TOKEN_TO_BE_REPLACED