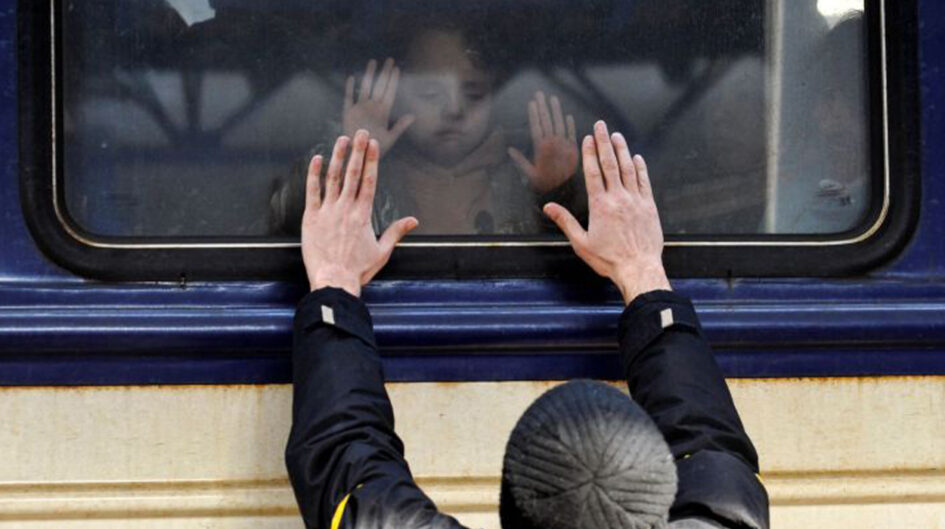 Waking up to the air raid sirens and echoing sounds of bombs. Having to make split-second decisions on what to do next and what essentials to carry. Running for the closest subway station for bomb shelter. As a faint realization that you might not see your home again sets in, you have already moved into the bunker.

Everything changed for the people of Kyiv when the Russian invasion began.

After the initial rounds of bombing, the stark truth set in. The war had begun. With complete disarray of thoughts and the absence of clarity or a plan of action, the people grew uncertain.

Uncertain whether you would remain safe if you stayed within the boundaries of your nation.

Uncertain whether you would remain safe if you fled the nation.

With more information pouring in, it became clear that staying within the city walls is impossible. It became clear that crossing the boundary into neighboring countries is the only viable survival option. Knowing their limited baggage, people struggle to choose what to carry.

Uncertain if they should carry as many essentials as they can.

Uncertain if they can carry objects that are sentimental to them.

Ukraine’s vastly inferior army size requires all hands they can get. The nation’s safety relies upon its civilians joining and taking arms to defend the nation. With the martial law in place that prohibits men aged 18-60 from fleeing the country while allowing women and children to leave, families realize the possibility that they might have to split.

Women uncertain if they should risk their lives for the nation and stay and fight or flee the nation to protect their loved ones.

Mothers remain uncertain if they can safely travel alone with their children.

Fathers remain uncertain if their family is going to remain safe.

With families swarming into the train stations, the scale of panic and despair became more evident. Families come together as one, to the train station, but separate at the time of boarding. As men try to get a glimpse of their loved ones through the tinted windows, some are lucky enough to run for one last embrace from their soon-distant family members. Fear sets in that this might be their last time seeing their family.

Men uncertain if they will make it out alive.

Families uncertain if they will ever reunite with the men again.

As families board down at the border of Ukraine, they stand in long queues. All of them displaced, equally helpless, and missing their loved ones. People start moving into the safety camps and shelters far away from the bombings and war. Finally, a slim sense of safety. But the challenges do not end here. With the camps being over-populated in the winter weather, families and children are left shivering in the dark as they try to get their meals and other supplies.

Uncertain about their coming days in the new country.

As the entirety of the situation settles in, people realize the true scale of their loss. Working their entire lives to build something they have at home and are now forced to become refugees and leave everything behind. They are left uncertain.

Uncertain if their home is still intact.

Uncertain if they will ever get back to their country.

With children witnessing war and separation from their loved ones, mothers wonder about the future of these young children.

Uncertain if this trauma and anxiety will ever stop haunting them.

Uncertain if the children will ever have the fulfilling future that the parents dreamt of giving them.

– This article was inspired by “The Girl with Seven Names: A North Korean Defector’s Story Book” by Lee Hyeon-seo.

“Hand me the gun and don’t move a muscle”, an injured Shankar Narayan whispers to his son, while they take cover under an old Contessa. The little boy does exactly as his father says, his hands trembling, desperately trying to... END_OF_DOCUMENT_TOKEN_TO_BE_REPLACED

As the night grew darker, enveloping an empty street with mystery and fear, it embraced two college students, Matteo and Ace. Drunk and floundering into the dark alley, they hadn't realised how far they had wandered until they came across... END_OF_DOCUMENT_TOKEN_TO_BE_REPLACED

The scene opens in a jury room, where a decision is to be taken on the death sentence of a man accused of murder. After voting, each juror explains why they feel the accused is guilty or not guilty. One... END_OF_DOCUMENT_TOKEN_TO_BE_REPLACED