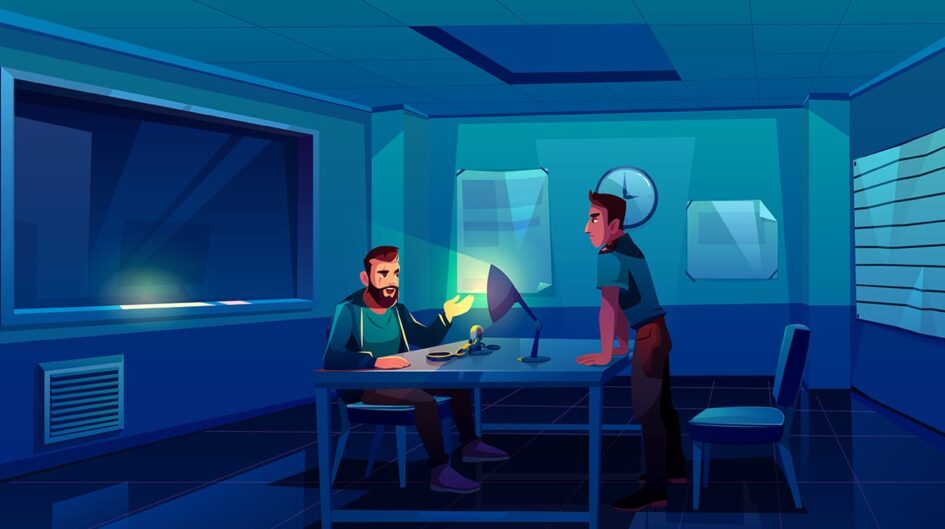 On the day just before New Year’s Eve in a fairly small town happened something that none of the citizens ever imagined. A bank robbery, where the robber wanted to loot six thousand five hundred kronor, eventually turned into a hostage situation. The police saved all the hostages but couldn’t get hold of the robber, who also happens to be a kidnapper. No one knows how he escaped.

The robber, who could not rob the bank as it turned out to be cashless, didn’t harm any of the hostages. But instead demanded the most bizarre thing in the history of bank heists, in return for releasing the hostages – Fireworks.

Now that the police are yet to catch the robber, they are all set to interview the hostages.

In an attempt to check whether it was safe to enter the building where the hostages were held, a police officer named Jack went to the neighboring building where he saw a woman with headphones, standing on the balcony. A few minutes later came a rabbit-headed man.

Name of the witnesses: Zara and Lennart

JACK: I am aware that both of you might still be scared from what had happened. But I will need you to answer honestly. My first question to …..

ZARA: What do you mean scared? I am not a child to be scared. Do you treat a woman as somebody who is always scared regardless!?

JACK: I didn’t mean it that way, ma’am. I want to assure you that I am in complete awareness of your situation.

ZARA: It doesn’t seem like you are aware. Shouldn’t you have found the robber by now? From the demand he made, he seems to be a complete idiot. The police these days, I tell you…

Well, for that matter many people these days are so dumb!

JACK: I understand, but trust me we are very close to—

LENNART: Wait a minute!! Was that a dig at me Zara?

ZARA: Not so dumb now, are you?

LENNART: Just because I put on a rabbit head for doing something that is not acceptable as a proper work or profession, doesn’t mean I am dumb. I am an actor and I also acted in—

LENNART: Yes! ‘The Merchant from Venice’, at the local theatre.

Jack is frustrated with the interviewees already. He starts to aggressively massage the portion between his eyebrows with his right thumb and index finger, where a big bump had already been formed during the time he was interviewing the previous hostages individually. And that’s when he discovered ‘The Merchant from Venice’.

ZARA: Will you at least be a little responsible for the uniform you’re wearing, and proceed with this interview.

JACK: Oh yeah! So irresponsible of me as a police officer for assuring the victims that the police sympathize with them! Anyways, let’s get into it now. What were you doing on the balcony? Weren’t you afraid of the robber?

ZARA: I don’t think that’s even a robber. I mean, what sort of a bank robber all dressed up in a ski mask, holding a gun that wasn’t even real, demands 6500 kronor? Like for real! And coming to your question, if you have forgotten, let me remind you that we were in the building for apartment viewing and that includes the balcony as well!

LENNART: Wow, that definitely speaks of how powerful of a woman you are. As you can see officer, the whole point of the interview is done now.

JACK: Not yet! I suppose you are not allowed to smoke in such apartment viewings but both of you did.

LENNART: Oh, how could you be so sure? I mean…how can a person smoke with the rabbit’s head stuck forever! Oh My!!! Just the thought of it makes me sweaty!

JACK: How can someone even come up with such a stupid idea of spoiling apartment viewings. Like seriously! Wearing a rabbit head and panicking people who want to purchase the flat.

I know, I know… But it was a working idea though!

ZARA: Can you proceed to the next question, please? As for me, the first one’s answered already and I have no time to spare for these interviews anymore.

LENNART: Yes, you are right Zara. Listen, officer, apparently, she is not someone who is free all the time, unlike both of us. She is a bank owner and a busy woman… you know…

JACK: *eyebrows raised* Oh, so if I were to believe you, Mr. Lennart, a police officer works as much as an actor who doesn’t even know the name of his drama correctly and all he does now is spoil apartment viewings to decrease the prospective buyers.

LENNART: Oh My! You took it too seriously. *waves his hand in the air*

All I meant was…

ZARA: Oh God! Help me. Where am I even stuck!? First, it was those 6 idiots and their master – the robber, and now the police. When can I get some air to breathe?!!!

ZARA: Well, work has to go on irrespective of holidays. But it did seem strange that the viewing was on the day before New Year’s Eve.

Anyways, am I done? Can I just leave now?

LENNART: Hey! take me with you too. You know she gave me a whole lot of economical advice when I was with her—oh yeah that’s when you saw us.

JACK: Fine then. If that’s all you want to say, then remember that it’s all in the notes in inverted commas. I mean, it’s all recorded as your statements.

All Jack could gain from the interviews is that the robber was a complete idiot. Or wait…. Was he really? For that matter, is he even a he? Who was the robber? And why did he/she create all this chaos for just 6500 kronor? Will Jack, who now has a huge bump on his forehead be able to find the truth?

– Inspired by the book “Anxious people” by Fredrick Backman.

As the night grew darker, enveloping an empty street with mystery and fear, it embraced two college students, Matteo and Ace. Drunk and floundering into the dark alley, they hadn't realised how far they had wandered until they came across... END_OF_DOCUMENT_TOKEN_TO_BE_REPLACED

“Hand me the gun and don’t move a muscle”, an injured Shankar Narayan whispers to his son, while they take cover under an old Contessa. The little boy does exactly as his father says, his hands trembling, desperately trying to... END_OF_DOCUMENT_TOKEN_TO_BE_REPLACED

Ayrton Senna. A man whose legacy lives on to this day. Most modern-day drivers look up to him. He has won 41 Grand Prix in 162 races, has been on the podium 80 times, and has won the world drivers championship... END_OF_DOCUMENT_TOKEN_TO_BE_REPLACED

The lockdown, for most of you, was the most boring time of my life. Six months of staying at home didn't do me any good apart from the fact that it brought me and my dad closer by giving us... END_OF_DOCUMENT_TOKEN_TO_BE_REPLACED