The King of Dance 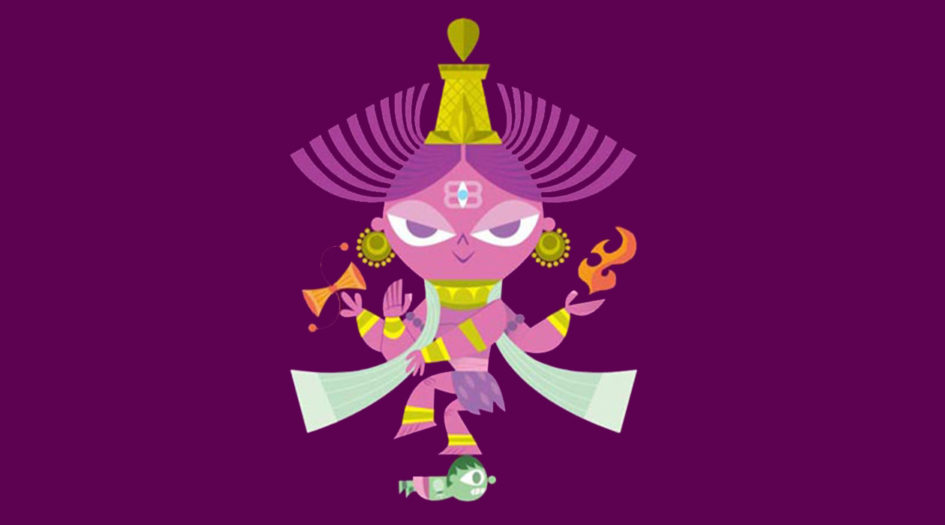 I glanced at the deer, as he jumped from one place to another. Whenever he bent forward to drink water from the lake amidst the rainforest, he looked up after each sip, keeping an eye out for a possible predator hidden in those deep lush green trees. My timid Bambi could never quench his thirst without always being in a constant state of fear and restlessness. After having a good look at this spotted fauna of the forest, I bid him farewell and headed for my inn. On my way out, I stepped upon the skin of some snakes, that scared the soul out of me!

Once the sun had set and the Purnima moon outshone the stars, the hearth was lit with the many twigs collected after the afternoon’s encounter with the deer and the skins. When the room was warm enough, I could concentrate on that glorious fire against which, the twigs stood no chance. The next morning, when I looked at the fireplace, there were no twigs, but only ashes. The fire had consumed it all and left this coarse, grey powder behind.

These encounters with the deer, snakes, fire and ashes made me cherish the memory of a brass effigy of ‘Nataraja- The King of Dance’, placed on a stool in my dance class in high school. We used to first bow to him in respect, and then mimic the instructor’s movements. He was a form of Shiva, who was often seen meditating on a tiger skin amidst the snow clad mountains, emotionless, with his eyes shut. But Nataraja was different. He smiled, he danced, and he interacted with the world around him. He wasn’t the violent Rudra or the indifferent Digambar.

The legend of Nataraja narrates that Shiva had appeared in the form of Bhikshadana, a wandering naked mendicant, in front of a group of arrogant sages. Seeing the virile hombre, the wives of the sages were driven towards the unclad one thereby angering their husbands. To avenge this uncouth, the sages hurled a tiger, a horned antelope, snakes, an elephant and an epileptic dwarf Apasmara to attack him. And lo behold! Bhikshadana flayed the tiger and wore the skin as his loincloth, ridiculed the antelope by placing it in between his fingers, caught the snakes and endowed them as ornaments, ripped the elephant and wore its skin as the upper garment and danced over the dwarf, crushing him and the sages’ ego beneath his feet. The sages bowed to the three-eyed Nataraja, ‘The King of Dance’, as he held fire in his one arm, a rattle-drum in another, his right-palm in Abhaya Mudra and the left-arm pointing towards his left-leg, stretched across the right-leg, standing on Apasmara,  as the halo of fire or Prabhamandal shone behind him. 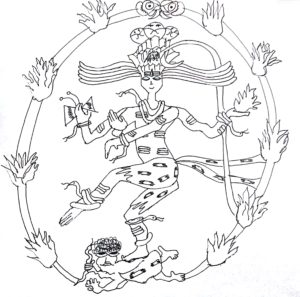 On observation, the complexity of Nataraja simmers down to the life we see around us. The deer whom we had met in the rainforest needs to be caught, tamed and pampered. He, like us, is restless and jumps either from decisions or to conclusions. ‘The King of Dance’ catches hold of this deer in between his fingers,  asks him to stay calm, but not sleep, and to ensure that he shakes the rattle-drum. As the beads of this instrument hit its leather bases, they produce the echoing sound of the cosmos. 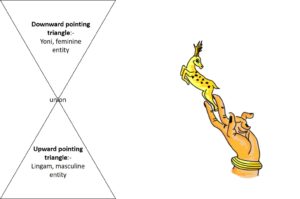 Fire, the element of destruction, burns in Nataraja’s hand. Fire is the universal consumer, the vessel of the Gods. Seeing it, we realise that nothing is permanent, for everything is converted to ash. Ash is what remains at the end of the process; the three lines of ash adored on Nataraja’s body are the three worlds: the heaven, the earth and the hell, all meeting the same end.

He is embellished with snakes, the personifications of recreation. The material body is destroyed by the fire but the breadth of life is conserved and takes a new form, just like the snake casts away his old skin and then sports a new one.

The halo or the Prabhamandal, encircling the entity, indicates the continuum in life. Things happen, may be good, may be bad, but life continues. Just like a ball rolling on land carries dust with it from every rotation- with the rising of Prabhamandal, i.e. life, ‘dust’ is carried along with it in the form of ignorance, illusion and arrogance. Once the rotation completes, Nataraja stomps on this accumulation of ignorance personified by the dwarf Apasmara (Apa= bereft of, smara=memory).

The heart beats on the left-side, hence that becomes the side of action, making ‘right’, the side of inaction. This conjoins the ‘left’, with the idea of ‘interaction with nature’, through materialism, and the ‘right’, with the idea of ‘isolation from nature’, through spiritualism. Nataraja’s right-foot stands erect, inactive, while the left-foot swings across it. Apasmara or ‘ignorance’ is crushed beneath the right-foot of spiritual reality, but, isolation from nature isn’t the ultimate principle.

Nature (Prakriti) requires attention, and hence the left-foot is placed over the right and is being pointed at by the left-hand. The left-hand is in the ‘Gajahasta mudra’ or the elephant trunk position, symbolizing the head of Nataraja’s son Ganesha, the result of his participation with nature. Finally, the right-hand rises in the Abhaya or the ‘fear-not’ mudra.

Nataraja’s Ananda Tandav or the ‘dance of bliss’ hence echoes the five principles- shrishti, creation through the rattle-drum; sthithi, permanence through the right-leg; samhara, destruction through the fire; tirobhav, illusion stomped like Apasmara; anugraha, grace through Abhaya mudra.

And thus, seeing him, the deer drinks the water peacefully. 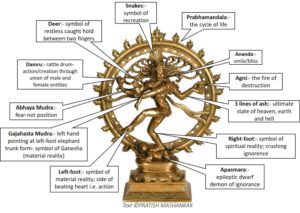 I can feel my pulse rising. At present, I cannot recall any of my memories. I only know that I should kill to defend myself, or else I'll die. I feel someone is controlling my mind. All I can see... END_OF_DOCUMENT_TOKEN_TO_BE_REPLACED

A few minutes before the alarm goes off at 4 am The birds are still asleep in their nests as I stare at the digital alarm clock, waiting for it to ring. One could say that I might be classified... END_OF_DOCUMENT_TOKEN_TO_BE_REPLACED

“Life started with a race.” Every person who has been a part of this ever-competitive world must have come across this phrase. Undeniably, every phase of our life was its victim and the education system hasn’t been immune to it... END_OF_DOCUMENT_TOKEN_TO_BE_REPLACED

The outbreak of Covid-19 has seemingly brought us into a new era. Despite a few genii arguing that a simple virus cannot alter the lives of supreme humans, yet here we are locked inside the four walls of our home... END_OF_DOCUMENT_TOKEN_TO_BE_REPLACED

Beneath the wild sky, Here I stay in the busiest of cities. I am the tree outside your glazed windows, Swaying away to every puff of the wind. Bazillions of times, the trees along the road I stay, Have perished,... END_OF_DOCUMENT_TOKEN_TO_BE_REPLACED