The Greatest Curse of All Time 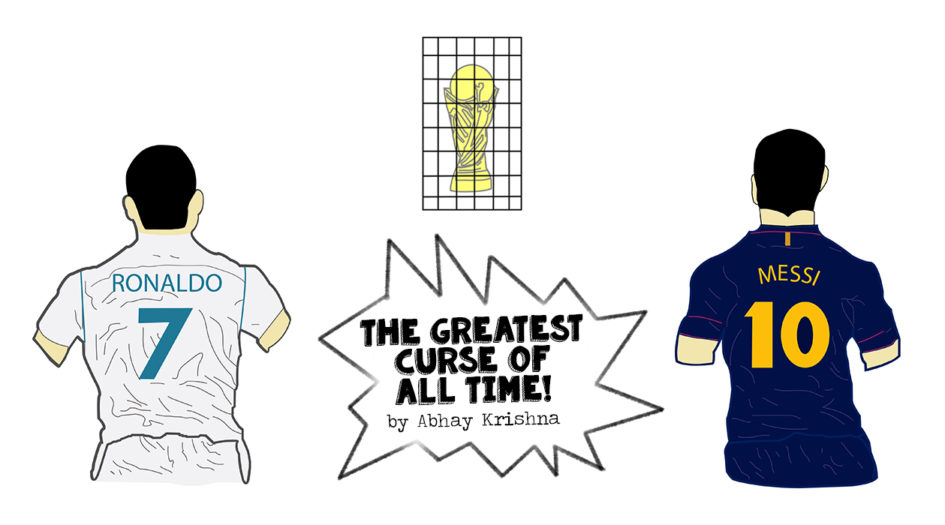 It was a typical cold Russian evening but the heat was on in Kazan Arena where France took on Argentina in the round of 16 of the FIFA World Cup 2018. France was the clear favorite, with a dream team made from a golden generation. But when a man called Lionel Messi on the other side, the odds are inconsequential. As they say, when God’s on one side, the odds don’t count. Sporting a beard akin to Zeus, the god of thunder, Messi was carrying his nation’s hopes on his shoulders like ever, leading a team in disarray helmed by a coach lacking a concrete tactic. Already facing flak from the Argentine media over his record of not winning a major trophy with the national team, a humiliating draw against Ireland, the smallest nation in the tournament, drew even more criticism. He missed a penalty shoot which was blocked by the goalkeeper, a part-time film director. (Fun fact: Iceland had a couple of dentist on their team too). A 3-0 thrashing from underdogs Croatia added more salt into the wounds. Under immense pressure to perform, Messi showed glimpses of his ethereal power against Nigeria. A magical three touch goal, a contender for the goal of the tournament reaffirmed the belief that he was sent from heaven itself to play football.

But all he could do was watch as France’s Kylian Mbappe, the 19-year-old teenage phenomenon who was crowned: “The best young player of the World Cup” made his mark with two goals. A delightful aerial pass setting up Argentina’s third goal tinkered with hope but it just wasn’t enough. The nimble-footed genius who swept opponents off their feet with artistry, walked into the shadows without the World Cup.

3 hours later, 2000 km away in Sochi, the other phenomenon walked onto the pitch to set the record straight. Cristiano Ronaldo’s Portugal was pitted against Uruguay. Having achieved everything that is possible to achieve with unimaginable feats, Ronaldo’s chances of sealing the “G.O.A.T” tag were bright with a World Cup win. CR7 took the World Cup by storm. He scored three goals with a last minute out of the world free-kick to equalize against Spain. He added another one to his tally against Morocco. The stage was set. Ronaldo who conquered England at the age of 19,  acquired a demi-god status at Real Madrid, and led their way to 4 European titles and a truckload of trophies, was off color against Uruguay. He put his everything into it and showcased his trademark dribbling skills with the ball. But nothing could make the ball go into goal. Twin strikes from Uruguay sunk Portugal. The World Cup missed its place in Ronaldo’s kingdom.

The two larger than life figures knocked out of the World Cup on the same day, the day when even immortals showed hints of mortality.

Spain immortalized itself 10 years ago, when they won the World Cup in South Africa. The Spanish team looked perfect to rewrite history with a good mix of experience and young talent. Facing Russia in the round of 16, they were at their artistic best, weaving their magic through their famous short range passing. They piled up a record 1115 odd passes while Russia managed a mere 291. But harshly in football, the winner is determined by the number of goals. In the nerve-wracking penalty shootout after both teams scored one goal each in 120 min, the latter’s goalkeeper Igor Akineef pulled off splendid saves. A result unexpected even in the craziest dreams, the lowest ranked team who qualified because of being the host nation beat the former world champions.

The famous curse of champions played its part with Germany getting knocked out in the group stage itself.  Since 1998, the defending champions in each World Cup have not managed to proceed into the knockout stages. Germany, who started as the number one team in the world, with some of the world’s best wearing the crest on their chest couldn’t break the curse. Two embarrassing losses against Mexico and Japan with 20 plus shots in each game couldn’t prevent them from biting the dust. This unfortunate event welled up tears in the eyes of many.

Brazil, the football powerhouses with a carnival-style of play, were predicted by experts to lift the coveted trophy for the record sixth time. Their hopes were dashed by Belgium’s pace. Belgium billed as the biggest dark horses, with the likes of Eden Hazard, Romelu Lukaku and Kevin De Bruyne played a classy brand of football to oust poster boy Neymar’s boys out of the tournament. Belgian goalkeeper Courtois deservingly won “The Golden Glove “award for his splendid saves which were instrumental in their progress. Brazil, Argentina and Germany didn’t feature in the semi-finals of the competition. The first time this has ever happened. This World Cup could well be called the underdogs’ tournament, the biggest underdog being Croatia.

Croatia reached the finals of the World Cup and finished runner-ups. This was their best finish ever. Inspired by the likes of Luka Modric and Ivan Rakitic, the team threw up some impressive performances. Their fearless and relentless approach paved the way for their progress. The midfield dominated by Rakitic and Modric who have been influential in Barcelona’s and Real Madrid’s success over the recent years showed put on a splendid show on the pitch. Their game embodied the beauty of football as the world fell head over heels in love with them. The inspirational campaign of Croatia would be etched in hearts for ages. With a small nation of about 4.5 lakh people scripting a fairytale chapter, football once again proved that even when the odds are stacked against us, if we dream and believe in ourselves, fly high with our feet still on the ground, there is no force to stop us.

On January 11th 2020, KMIT celebrated its first event of the new decade: Patang Utsav. This event is a long-standing tradition of KMIT where we celebrate Sankranthi, the festival of harvest. The celebrations commenced at 9.00 AM and continued till... END_OF_DOCUMENT_TOKEN_TO_BE_REPLACED

“If only our eyes saw souls instead of bodies, how very different our ideals of beauty would be.” ~ Anonymous   “I wish I had a body like her….” “I wish my arms were like his…..” There are so many... END_OF_DOCUMENT_TOKEN_TO_BE_REPLACED

There were times with very limited interaction among people.  The power of being able to share your opinions with a wide audience, to make your voice heard was not something everyone could achieve. Thanks to the boon of social media,... END_OF_DOCUMENT_TOKEN_TO_BE_REPLACED

The year is 2010:  The beginning of a new decade and a fresh start. While most of us were enjoying the age of innocence, we were most certainly unaware of the uprising revolutions and changes surrounding our nation and all... END_OF_DOCUMENT_TOKEN_TO_BE_REPLACED

As the year 2011 rolled in the world population hit 7 billion. Leonardo DiCaprio finally won a well deserved Oscar and for the first time in history, a man married a software. Here is a list of 19 events that... END_OF_DOCUMENT_TOKEN_TO_BE_REPLACED